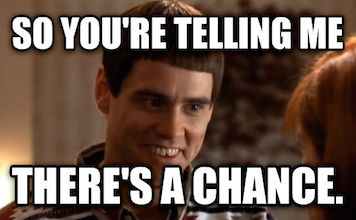 All right, so the third contest (3/2) in this event was a massive improvement over the first two for Team RG. We didn’t have any late scratches (cough, cough, Derrick Rose) and I actually remembered to enter a lineup (my bad, I know). In Wednesday’s contest Team RG came in second behind LineStar with a score of 280.5 points. If you look at the standings, we are currently in last place thanks to the poor start, but they are dropping the lowest two scores. In the words of Lloyd Christmas, “so you’re telling me there’s a chance!”

Here were the top five plays that rounded our our lineup for tonight’s contest:

Eventually, Russell is going to have a letdown game. It’s bound to happen. It’s hard to see that coming tonight though, and his current price doesn’t exactly match his recent level of production. He has been on fire since entering the starting lineup and he could be responsible for an even larger part of the offense tonight. Kobe Bryant has already been ruled out and Jordan Clarkson is questionable. His matchup against the Hawks isn’t one that leaps off the page at us, but his opportunity outweighs the matchup.

Remember when he and Tayshaun Prince were alternating starts? Those days are long behind the Wolves now and it appears that LaVine will see around 35 minutes per game moving forward. Tonight he draws a favorable matchup against the Bucks, who have struggled against wing players all season. LaVine’s usage has been down since entering the starting lineup, but his increase in playing time has more than made up for it.

Once Kevin Love was ruled out, James become an automatic play for me in cash games. Not only was the matchup in his favor (Wizards have not been good against small forwards), but his price was also depressed. As long as this game stays within striking distance, we should see a monster fantasy outing from the King. The love injury also made me consider Kyrie Irving, but I eventually decided to take the cheap route at point guard.

Young was one of the safer plays on the board tonight. Big men have a lot of success against the Nuggets and Young comes into the game in great form, averaging 35.4 fantasy points over his last five games. It was a close call between Young and Aaron Gordon for me, but I eventually sided with the safer play in Young. I was a little concerned about the potential blowout in Orlando.

Towns has been a little inconsistent over the past couple of weeks, but has shown that he has 50 fantasy point type of upside. With Kevin Garnett and Nikola Pekovic out, I loved the spot for him tonight against the Bucks. This game has a sneaky high total of 213.5 points and I wanted to get some exposure to both teams (Jabari Parker is also in the lineup). Alex Len was my big fade of the night and one that could ultimately decide my fate.