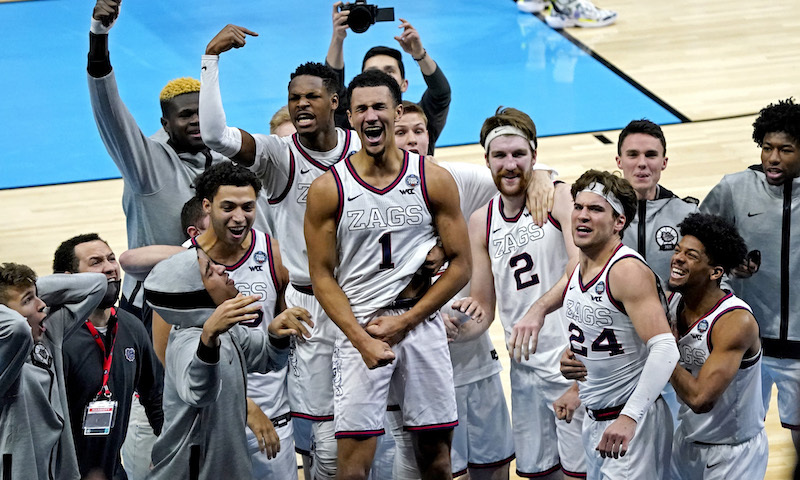 The Final Four started ugly but ended with one of the greatest NCAA tournament games ever. UCLA fans are left heartbroken, to be sure, but tonight we benefit at their expense as the college basketball gods deliver a matchup that is long overdue. Baylor and Gonzaga have been the best teams in the nation since the start of the college basketball season, and now they play on the final Monday.

College basketball bettors were supposed to have a blueprint from Dec. 5 of this national championship matchup. Unfortunately, Covid had other plans, canceling the first of what would be eight canceled games by the end of the season for the Bears and seven for the Bulldogs.

Fast forward four months and Gonzaga remains undefeated with a perfect 31-0 record. Baylor’s first loss didn’t come until Feb. 27, in Allen Fieldhouse. They would suffer only one more defeat against no. 12 Oklahoma State in the Big 12 tournament. Would Gonzaga have stumbled against Baylor had that Dec. 5 game gone on as scheduled? We’ll never know. All that matters is the two juggernauts face off Monday night, and despite Baylor’s dominance against Houston on Saturday, sportsbooks still believe the Bears have a hill to climb if they are to cut down the nets in Indianapolis Monday night.

Gonzaga opened as 5-point favorites shortly after Jalen Suggs banked his game-winning buzzer-beater Saturday night. The spread has shortened a half-point and sits at Gonzaga -4.5 across the sports betting industry as of Friday evening. Neither semifinal game severely impacted opinions behind the counter — FanDuel Sportsbook posted a look-ahead national title line for the likely matchup before the Final Four tipped off, making Gonzaga 5.5-point favorites at the time. Similarly, the total rests at 159.5 after opening 160.

Right now (Monday morning), a slight majority (55/45) of bets are backing Gonzaga, per Scores and Odds. The public loves the Over, however, with 75% of bettors believing the two teams will combine for 160 points or more.

The latter data point isn’t a surprise. There are more March Madness bettors than any time in U.S. sports betting history, and most of them want to root for points in the biggest college basketball game of the season. On top of that, recency bias is at play and there’s a two-game sample in which the Over hit at a 100 percent clip in the Final Four on Saturday night. Baylor-Houston barely got there as Drew Scott’s defense held the Cougars to 59 points. Despite Houston struggling to score points, Baylor stayed hot from downtown and scored 78 of their own, which was good enough to clear the closing total by two points. UCLA and Gonzaga went to overtime, which was a dagger for those who took 2H Under. Without extra time, the Over still cleared the original 146-point game total by 15 points at the end of regulation.

So what will happen Monday night? Will Mark Few, sophomore forward Drew Timme and the Gonzaga Bulldogs cement themselves into college hoops lore, or can the Bears slow down an offense that has thus far been unstoppable? Whether you’re betting on the spread, moneyline, or Over/under, here are some facts to keep in mind before making your picks and national title bets at the sportsbook.

Think it’s a stretch to call Gonzaga the greatest college basketball team of all time if they win Monday night? It’s not as much of a reach as you think. According to KenPom, the Bulldogs’ adjusted efficiency margin (AdjEM) of +38.13 is the highest ever recorded by the advanced analytics site. This team is truly historic. They score in transition with ease I’ve never seen, even when the stakes are at their highest.

JALEN SUGGS FOR THE WIN!!!

GONZAGA TO THE TITLE! pic.twitter.com/KrWdbWMdGL

Based on the quality of shots taken by both teams, a metric created and measured by shotquality.com, the Bulldogs were expected to win by 22 points.

Gonzaga was expected to win by 22 based on the shots taken!

Essentially Gonzaga took high-quality, +EV shots, just as they have all season. Consider the fact that Gonzaga leads the nation in eFG% and no team has ever made a higher percentage of their two-point shots through a season than this squad. Their two-point shots weren’t falling at the same rate against UCLA, though. In fact, their two-point percentage was down 6.2% from its average. Defensively they played better than you would think based on the score, but UCLA managed to outperform expectations by making a lot of difficult, contested mid-range jumpers. Johnny Juzang alone scored eight points more than what was expected based on his quality of looks.

3) Gonzaga starters played A LOT in the Final Four

Could the Zag be hungover come Monday? They played the late game plus extra minutes. Now they’re only given limited rest between their emotional victory and the tip-off of the national championship. In fact, four of Gonzaga’s starters played at least 40 minutes, with Nembhard and Ayayi each playing 42 and Kispert playing 44. Only Timme played fewer, as foul trouble “limited” Gonzaga’s star player to 38 minutes. Head coach Mark Few only went seven-deep and his bench players contributed merely one made field goal. Depth is a problem for the Bulldogs, there’s no question about it. That’s the biggest—maybe only—knock on them against Baylor.

1) Baylor’s covid setback is over

While an easy conference schedule certainly played a role in keeping Gonzaga undefeated, covid set Baylor back during a tough stretch of Big 12 games. Baylor had limited practice and went without playing for nearly a month due to the unfortunate situation. When they finally returned to the hardwood, they struggled out of the gates, beating a terrible Iowa State team by only five points while hosting them in Waco. They followed up with their first loss of the year at Allen Fieldhouse and an overtime win at West Virginia. Could this have set them back in the betting market, too? It’s possible. And if so, then there might be value in taking the points tonight.

Unlike Mark Few, head coach Drew Scott goes deep to his bench. Against Houston, three bench players played at least 19 minutes. And in a closer game against Arkansas, we saw things play out similarly, as reserves Tchamwa, Flagler, and Mayer combined for 25 bench points.

One major concern for the Bears is their lack of interior presence. Their starting center, Flo Thamba, is 6-10, but Scott prefers to play small with a lineup of four guards plus 6-5 Mark Vital defending down low. Can Vital matchup with Drew Timme? Doubtful. Defenders who match Timme’s size have a tough enough time slowing him down. Baylor can play tough defense, but I’m not sure it will translate against Gonzaga’s style of offense.

Look, when it comes to whom you’re betting on to win the national championship, there are compelling arguments for each side. On one hand, Baylor seems to be clicking, they’re long past their covid-induced slump, and Jared Butler just had his best game of the tournament less than 48 hours ago. Moreover, a 14.5-point underdog took Gonzaga to overtime in a game that was both physically and emotionally draining. On the other hand, Gonzaga is arguably one of the greatest college basketball teams we’ve ever seen. They play up-tempo, consistently find quality looks, and their star player, Drew Timme, has a superb matchup.

I started writing this ready to take the Bears with the 4.5 points. By the time I finished, though, I’ve talked myself out of it. I’m betting on Gonzaga if the spread falls to -4. If I can’t find that number before tip-off, I’ll go ahead and back the Zags -4.5 at BetMGM anyway. I’m staying away from the totals here, but if I had choose a side then I’d fade the public and take the Under.

[Bet On Gonzaga -4.5 at BetMGM Sportsbook]