Announcing the 2014 Tournament Player of the Year

After an exciting set of massive contests throughout the NFL season, 2014 has officially come to a close. It was a long fought battle for the 2014 RotoGrinders Tournament Player of the Year, with big swings in the standings all the way up to the end, but there can only be one winner.

So, after quadruple checking and confirming all of the results from the biggest contests of 2014, I am happy to announce the 2014 TPOY winner…..McJester! 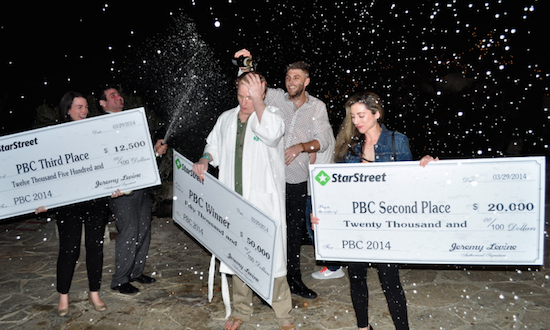 The race to the finish was neck and neck, but in the end, Jonathan “McJester” Zellers was able to hold off all of his competition, despite some late risers, including TwoGun’s big jump at the very last minute (more on that later).

Along with eternal fantasy glory, winning the Tournament Player of the Year awards Jonathan with a first-class flight and luxury suite for the legendary RotoGrinders NFL Kickoff Party in Las Vegas this upcoming NFL season. At that event, Jonathan will also be honored in an award ceremony complete with past TPOY winners Dan “DP47” Porath and Al “Al_Smizzle” Zeidenfeld.

McJester is most well known for his utter dominance of the Playboy Mansion Basketball Championship in April, where he not only won, but took down second and third place as well (picture shown above) for a total of $82,500 in winnings. Of course, a title can’t be won with a single victory, and this award was no exception. McJester won massive (think multiple thousands of entrants) $25 entry GPPs numerous times, as well as qualifying for and placing highly in more than one live final event.

This feat was made possible due to McJester’s unique strategy of attacking GPPs, which has served him extremely well in his aspirations to win the TPOY. Many tournament players enter multiple lineups into one contest to diversify their players and get as much exposure as they can to all of the players they like on any given day.

Jonathan, however, approaches multi-entry GPPs in a completely different way. What I mean by this is that McJester often enters a large amount of entries (usually around 50) into a tournament, but the way he distributes his players amongst those entries is completely different than your average DFS player. Instead of making each entry completely different, he picks a very small group of “core” players that he likes for that day and tries to get as many combinations of those players as possible. The end result is that he risks losing much (if not all) of his entry fees on any given night, but when he hits, he hits BIG. This setup ensures that if his core group of players hits, he will have a much better chance of taking first place in that big tournament. As a result of this method, he has finished with 5 or more of the top-10 spots in massive field tournaments on more than one occasion, which results in well over $100,000 in profit each time.

This strategy served McJester will in his race for the TPOY, because, by the rules of the TPOY, only your best finish is counted toward the standings for any particular contest. Since this method goes for the gold every day, McJester ended up with likely more first place finishes than any other participant, which provided a nice boost in TPOY points.

Jonathan’s story and rise to DFS fame is quite an incredible one, and we’re extremely happy to have him as our 2014 Tournament Player of the Year.

Want to learn more about McJester’s inspiring story? Meet the man behind the screen name by checking out our sit-down interview with McJester here.

While there can only be one champion, it would be a shame not to give due credit to the other fantastic DFS players who round out the top 10 in our final 2014 TPOY standings. Each one of these guys had an incredible year of DFS success and should be commended on what they’ve been able to accomplish.

Michael, AKA “TwoGun”, is an NFL/NBA specialist who had tremendous success in 2014. Michael was quickly climbing up the rankings this NFL season with more than 10 top-ten finishes in big NFL tournaments throughout the past few months. His biggest jump came at the very last minute when, on December 28th, he bested almost ten thousand other people in a $200 buy-in GPP for 5,942 TPOY points and $500,000 in winnings. That score helped him jump over the #3 finalist, CSURam during the last seconds of the 2014 TPOY race. Michael is also a CoFounder of the DFS site SportsTradex.

Of Note: Michael is off to a scorching start in 2015 after winning DraftKings Divisional Round Millionaire Maker.

Peter is probably one of the more recognizable names in daily fantasy sports, and it is certainly for good reason. Many of you recognize the name from those commercials featuring lip-locked sock puppets and piles of gold, but Peter is much more than that.

CSURam’s most notable 2014 success was taking down a $1,000,000 first place prize in the Fantasy Baseball Championship in the Bahamas this past August. However, Peter’s success has extended beyond MLB. Peter has tallied big TPOY scores in each and every major DFS sport, and is hands down one of the best players in the industry. He incredibly qualified twice for the Fanduel’s $7,000,000 FFFC and three times for DraftKings $2,500,000 NFL King of the Beach.

Peter is also one of the longest-standing contributors here at RotoGrinders and can be found on a number of our Grinders Live shows throughout the year.

Mitch, AKA “TheClone” is one of the less public-facing players out there, but he is an absolute force in the DFS world. While you can find him dominating in every major sport, his biggest jumps in the TPOY standings came from two top-2 finishes in $200 buy-in NFL tournaments in early October. He also had a finish just outside the top-10 in the World Fantasy Baseball Championships in Las Vegas, bringing him home $12,000 and 1,407 TPOY points.

Justin has been a long-time contributor here at RotoGrinders, and you can find his work in both our incentives products as well as our live DFS advice shows.

StlCardinals pulled out to an early lead in the TPOY race when he went on an epic run at the start of the 2014 baseball season, winning what seemed like every $200 GPP that was hosted in the month of April. Justin is one of the best minds in the industry, capable of finding an edge in just about every sport. (In fact, I once heard him say that he would love to play DFS WNBA, because he thinks there would be an edge there!)

Jay is mostly well known for his successes in MLB tournaments, as he went on an epic run this year with a number of huge scores. Jay has a few larger NFL wins in 2014, but the remarkable thing about this finish is that virtually every qualifying contest in his TPOY standings were from baseball. Finishing this high on a list of some of the best DFS players in the world from one sport alone is nothing short of incredible.

Aside from winning a number of big one-day GPPs throughout the 2014 baseball season, Jay’s biggest accomplishment of the year was qualifying three times for the exclusive King of the Beach finals in August, where his best finish was second place for a $500,000 score.

While many of us remember Ganondorf as the evil villain from The Legend of Zelda series’, Andres (who prefers to go by “Dre”) is anything but a villain. He is a numbers guy through and through, and had a ton of success in all three of the major sports in 2014, including a fourth-place finish in the World Fantasy Baseball Championships in August, netting him a cool $50,000.

If you couldn’t guess, Matt is a Florida native, and a pretty big Florida State Seminoles fan. Matt is a former poker pro who has turned to DFS and had a lot of success right off the bat. Perhaps Matt’s biggest accomplishment in poker was a 2nd place finish in a 2005 World Series of Poker bracelet event for a $100,000 cash, and that’s not even counting his more than $400,000 in lifetime poker earnings.

In the daily fantasy world, SamENole is best known for taking down the first-ever $27 buy-in Millionaire Maker tournament for a nice 7 figure payday. After that start to the NFL season, Matt also went on to qualify for the King of the Beach final event at the Atlantis resort in the Bahamas.

Troll4MVP is actually a team of good friends that go by many different names on the various daily fantasy sites. Eytan partnered up with his friend Aaron Merchank to take daily fantasy head on and have certainly done very well for themselves.

For the most part, this pair labels themselves as NBA specialists, as they decided to uproot their lives and move to Vegas a few years ago with the goal of earning a living via sports betting on NBA games. Their success in that field seems to have directly translated to DFS, and they decided to use that success to play more NFL games this season. It seems that was a pretty good decision, since they qualified for, and eventually won, the NFL King of the Beach event in December for a not-too-shabby $1,000,000 first place prize.

Drew Dinkmeyer is perhaps the Poster Boy of DFS as a skill game after being profiled in the Wall Street Journal in June of 2013. Drew’s biggest feats of the year include qualifying for the King of the Beach baseball and football finals and taking down a 109,000+ entry Millionaire Maker tournament in the middle of December, which shot him up the leaderboard 7,620 TPOY points.

When Drew isn’t visiting Africa and sending his RotoExperts writing partner, Mike Leone, on extravagant trips to the Bahamas, you can find him on Twitter sharing his views and opinions on both players and daily fantasy strategy in general.

Overall it was incredible year for the RotoGrinders Tournament Player of the Year race, and we want to give a huge congratulations to McJester for taking down the most difficult-to-achieve and sought-after award in daily fantasy sports.

We’re looking forward to an exciting 2015, and with plenty of massive contests each and every day, who knows, maybe you can be the next Tournament Player of the Year!