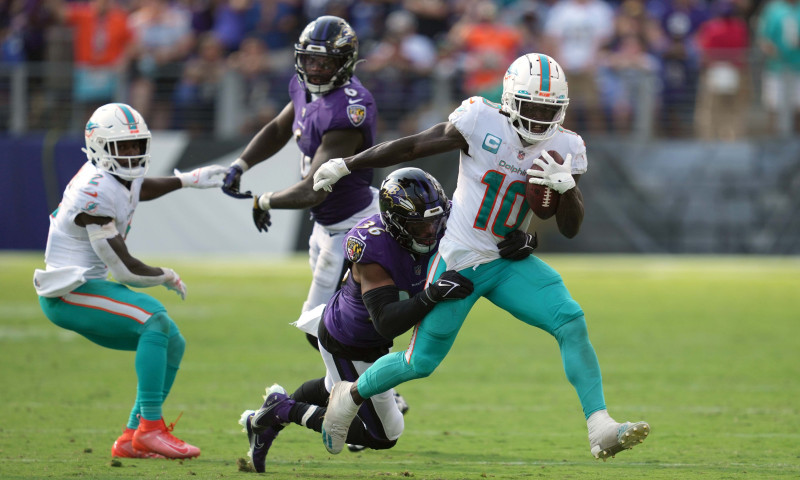 In Week 13, NFL fans will be treated to a potential Super Bowl preview between the Miami Dolphins and San Francisco 49ers in Santa Clara, California. The Dolphins remain undefeated in games that Tua Tagovailoa has played the entire duration of the contest, including five straight wins since he returned to the field in late October following nearly a month on the sidelines. The 49ers enter play in sole possession of first place in the NFC West after four consecutive victories, and are fresh off of a shutout over the New Orleans Saints. Oddsmakers are expecting a tightly-contested affair between these two elite teams on Sunday, pricing the 49ers as 3.5-point home favorites on the spread.

Since Tua Tagovailoa returned to the field in Week 7, the Miami offense has been a juggernaut – ranking 3rd in offensive EPA/play in that span. Heading into this weekend, the Dolphins have scored at least 30 points four consecutive games, during which Tagovailoa has a pristine 10-to-0 touchdown-to-interception ratio and is completing 72.4% of his pass attempts. On the season, Tagovailoa leads the NFL in QBR and has the highest quarterback grade of any qualified signal caller. On Sunday, the emerging star could find life slightly more difficult if left tackle Terron Armstead is unable to suit-up. Armstead has been one of the better pass-blocking tackles in the league in 2022, but is trending towards the sidelines in Week 13 as he recovers from a strained pectoral muscle that he suffered last weekend against the Houston Texans. On a more positive note, Head Coach Mike McDaniel said on Wednesday that he thinks running back Raheem Mostert has a realistic chance to return to the backfield against the 49ers. Mostert is averaging 4.6 yards-per-carry on the ground on 118 attempts so far in his first year in Miami.

After going undrafted this past summer out of Texas A&M, Kader Kohou has carved out a large role for himself as part of this Miami secondary unit. Primarily playing in the slot this fall, Kohou has not allowed a touchdown on 311 coverage snaps. Unfortunately, he and safety Jevon Holland have been the only two consistently impressive players for the Dolphins’ pass defense in 2022. Cornerback Xavien Howard and safety Eric Rowe have continued to be liabilities at their respective positions and Elandon Roberts has struggled mightily in coverage at linebacker. Overall, the Dolphins defense ranks 18th in EPA/play through 11 games.

Since reclaiming the starting quarterback job in San Francisco in Week 2, Jimmy Garoppolo has been more than serviceable – posting a 16-to-4 touchdown-to-interception ratio in 10 games, winning seven times during that stretch. During the 49ers’ current four-game winning streak, Garoppolo has seven touchdowns without an interception, and is completing 72.2% of his passes. The veteran signal caller continues to struggle mightily when under duress, but elite offensive line play coupled with a relatively weak Miami pass-rush, which ranks 20th in sacks per pass attempt, should lead to another strong performance from him in Week 13.

Per Pro Football Network, the combination of Nick Bosa, Charles Omenihu, and Samson Ebukam have 60 pressures this fall. After left tackle Terron Armstead left last week’s game for the Dolphins, the offensive line surrendered four sacks in a span of 10 plays against the Texans. On the season, the 49ers rank 6th in sacks per pass attempt, and could wreak havoc in this matchup if Miami is forced to insert back-up players into starting roles due to injury.

In the eight games in which Tua Tagovailoa has played the entire duration of the contest, the Dolphins have scored at least 20 points all but once – in his first game returning from injury. The absence of Terron Armstead against a formidable San Francisco defense should be able to halt Miami’s four-game streak of scoring 30-plus points, but Head Coach Mike McDaniel’s ability to scheme open elite speed in the passing game should afford the Dolphins a safe floor in the low-20s in this spot – take Miami’s total points band here.