Nick Foles (+58.5) vs Patrick Mahomes: Total Passing Yards: Let me start off by saying that Mahomes is the much better QB, but he is in a much worse matchup. While I still expect Mahomes to put up a whole lot of yards, the matchup against the Jags is one of the toughest in the league and Foles is getting a great matchup against a terrible KC pass defense and is getting a full 58.5 yards. Last year, Mahomes put up a 318 passing yards per game on average and I think he’s in for a small amount of regression this year. On the other side, Foles averaged 282 yards per game and although he’s in a worse system and offense overall, he gets a much better matchup than Mahomes. Overall, this number is way too big not to go with Foles.

Travis Kelce (+.5) vs Tyreek Hill: Total Receiving Yards: Jacksonville is a tough matchup for every single position, but they are especially tough against WR1s. Last year, the Jags ranked 4th in DVOA against WR1s while they were middle of the pack against TEs (13th in DVOA). On average, Kelce is going to get more yards than Hill in this matchup, but the main thing that makes this a positive EV pick is the consistency. Kelce is going to be targeted for 5-15 yard gains throughout the game, while Hill is more of a boom-bust play. Realistically in this spot, Kelce gets more yards than Hill 7 out of 10 times, but the 3 out of 10 times that Hill wins, he probably wins by around 50 yards. You take Kelce here and move on. 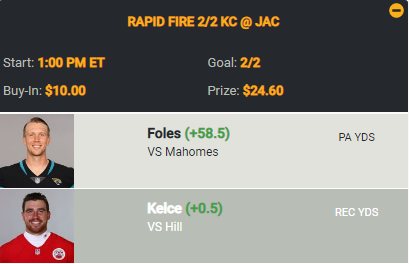 Marcus Mariota (+58.5) vs Baker Mayfield: Total Passing Yards: This props similar to the last one. Baker is the much better QB and should end up with more yards than Mariota, but this number is way too big here. Cleveland is a pretty decent favorite which means that they will probably be ahead late in the game and running the ball to kill the clock, while Mariota is likely to be in catch-up mode. While Mariota did average more than 60 yards per game less than Baker, this is a positive game script for Mariota while it is a negative one for Baker. Roll with Mariota here.

Jarvis Landry (+1.5) vs Odell Beckham Jr.: Total Receptions: If you haven’t already heard the news, Beckham has some hip issues right now which will likely limit him greatly in the game this Sunday. Landry, on the other hand, is at full strength and should be in for a decent game here. People forget because of his lackluster year last year, but Landry is a WR that gets targeted constantly and was always near the top of the league in total receptions. In this matchup when considering Beckham’s health issues, Landry will likely get more receptions than him outright. Landry wins this prop in a landslide. 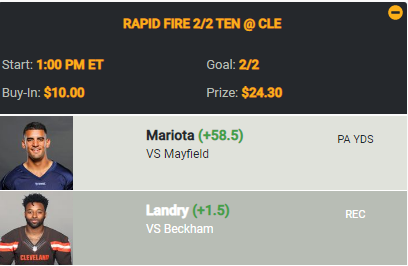 Russell Wilson (+7.5) vs. Andy Dalton: Total Passing Yards: In this prop, we have a nice little correlation between the two players. The Seahawks receiving core is looking a little thin, so if Wilson has a big day, you can all but guarantee that Lockett is going to crush. Wilson has the much better matchup going up against a Bengals secondary which was near the bottom of the league last year in passing DVOA, while Dalton goes up against a Seahawks secondary that was slightly about average last year. Wilson is the better QB and with Green likely inactive this game, Wilson has probably about the same caliber of offensive weapons here. While the game script favors Dalton a little, Wilson should end up with more yards outright and is getting 7.5 free ones. Wilson is the obvious play.

Tyler Lockett vs Tyler Boyd (+14.5): Total Receiving Yards: As I stated earlier, if Wilson wins the first part of this prop, it’s all but a guarantee that Lockett wins the second part here. Lockett is going to be the main target in this offense against a bad defense. While Boyd is the number one option with Green out, Lockett is the superior WR in my opinion and with Wilsons ability to drop a deep pass right into Lockett’s hands with pinpoint accuracy, it’s tough to see a scenario where Lockett doesn’t go off for a big game in this matchup. Take Lockett even giving up 14.5 yards. 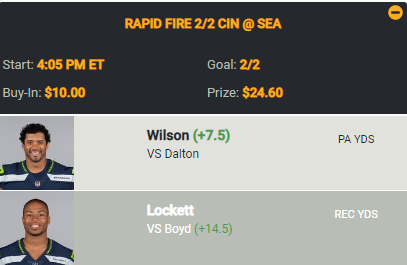