To drive home the point of my typical intro above, I noticed some discussion on Twitter this past week about paying up for defenses and how sometimes it’s just worth it to find a defense in a good spot regardless of price rather than trying to save a few dollars at the position. This was mainly in regards to the low ownership again of the Denver defense on Sunday night. The counterpoint to this was that defenses can be high variance due to the fact you cannot predict defensive TD’s. I see both sides to this argument and I know I tend to try to pay down at defense. But I am also mainly a GPP player. I think in GPPs we have the ability to take more chances. But I also think sometimes paying up at defense may be the contrarian play in GPPs as others always look to save salary at the spot. In cash games, I think you should just be looking for the defense in the best spot once you feel the rest of your lineup is set.

NOTE: The numbers below reflect an average of defensive fantasy points from the start of the 2014 season through Week 12 2016. Top plays and secondary plays only started in Week 7 2016 as a way to breakout defense that fit the criteria into two separate categories.

The defense that fit the criteria did not have a very good week and the “Top Plays” certainly took a hit as both Buffalo and Denver did not produce for our DFS teams. That being said, I would take both those teams again in similar spots. Sometimes things just do not work out. The secondary plays were a little better but only Baltimore eclipsed the 10 point mark for the week.

My other defenses to target were good on Thanksgiving as Pittsburgh ended up the top scoring defense on the day. My biggest regret was at my other defense to target for Sunday, which was Tennessee. I even mentioned in the commentary that I strongly considered the Giants, and liked them, but I went with Tennessee due to the cheaper price. While Tennessee had a good matchup, they simply are not a very good defense. The Giants went on to put up the most fantasy points of the week with 23 points. It drives home the point again that price is not everything when it comes to defenses.

Defenses that Fit the Criteria (At Home, Favored and Opponent Team Total of 21 points or less

I sometimes hesitate to list the Patriots in this column because they tend to have a bend but don’t break philosophy on defense. All they care about is winning football games and they know their offense can outscore anyone. This is evidenced by the fact that they rank 14th in total defense but third in scoring defense. They also have been below average in sacks and takeaways. But I think their opponent/matchup this week is too good to ignore. The Rams offense has struggled mightily this year ranking 31st in total offense and last in scoring offense. They started to look a little better early last week under Jared Goff, but they ended up finishing with under 300 total yards, and after scoring 21 points in the first half, failed to score in the 2nd half against a bad Saints defense. They are giving up almost ten fantasy points per game to opposing defenses (fourth most in the NFL) and their team total this week is about as low as it gets. I think the Patriots make a good cash game play this week that should provide a high floor. Their opponent adds a little upside as well. 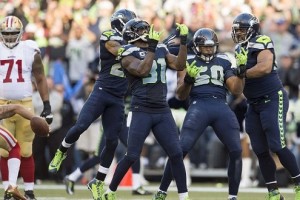 The Seattle defense currently ranks seventh in the NFL in total defense but first in scoring defense, holding opponents to only 17 points per game. They are also fourth in the NFL in sacks and have forced multiple turnovers in each of their last three games. This week they face a Carolina offense that has been prone to giving the ball away. Carolina has turned the ball over 21 times this season, which is the fourth most in the NFL. Their tough loss to the Raiders last week may have also just about eliminated them from playoff contention, and now they travel across country to play the Seahawks in one of the toughest environments for opposing teams. I think this set up as a very good spot for Seattle. I would be a little more hesitant to use them on FanDuel where they are the highest priced defense, but I like them a lot more on DraftKings at a price below both New England and the team we will get to in the “Other Defense to Target” section.

The Packers defense has struggled at times this year, although they did just hold the Eagles to 13 points this past week. They also have 28 sacks on the year, which ranks seventh in the NFL. This pick is mostly a play against their opponent this week, the Houston Texans. Houston ranks both 29th in total offense and scoring offense on the year. They have also turned the ball over 19 times which is tied for the seventh most in the NFL. They’re allowing just over eight fantasy points per game to opposing defenses, which is eighth highest in the NFL. I do not love the Packers here, but the matchup is a good one, and they come at a discounted price on both sites this week.

Baltimore has sort of quietly been one of the best defenses in the NFL this season, ranking second in total defense and fourth in scoring defense. They also have 26 sacks on the season and have created 19 turnovers, which are both top ten in the NFL. Their opponent this week, Miami, ranks 25th in total offense and 17th in scoring offense. The biggest problem for Miami here is that Miami wants to run the ball, but Baltimore has the best run defense in the NFL. If forced to pass, Miami is only averaging 216 passing yards per game, which is the fifth lowest in the NFL. They also have allowed 26 sacks on the season, which is pretty high considering they do not throw it very often. I think this game sets up well for the Baltimore defense, and they come at a nice price on both sites.

After last week of coming off the Giants to pay down for the Titans, I am going to pay up for possibly the top defense of the week here. The Broncos currently rank top ten in both total defense and scoring defense on the year. They lead the NFL in sacks with 35 on the season and rank tied of third in takeaways with 20 on the season. Their opponent this week, Jacksonville, ranks in the bottom ten in the league in both total offense and scoring offense. They have turned the ball over the second most in the NFL this season with 22 turnovers. For this reason, they are giving up over eight fantasy points per game to opposing defenses, which is the sixth highest in the NFL. I think Denver makes one of the top plays on the board this week in both cash games and GPPs. I think I like them slightly over New England even but New England is a fine option as well if you need to save a few dollars.