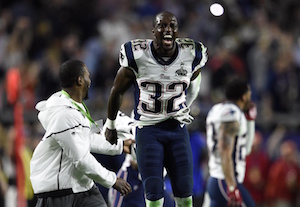 NOTE: The numbers below reflect an average of defensive fantasy points from the start of the 2014 season through Week 15 2016. Top plays and secondary plays only started in Week 7 2016 as a way to breakout defense that fit the criteria into two separate categories.

The defenses that fit the criteria had an up and down week. The top plays (Buffalo and Houston_ both posted respectable totals of 9 and 8 fantasy points, but not the high ceiling we were looking for in GPPs. From the secondary plays, the Giants and Cowboys posted strong scores of 12 and 14 points, respectively. The Chiefs and Falcons also posted average to above average scores of 9 and 8 fantasy points. The two clunkers came from the Ravens and Vikings.

Defenses that Fit the Criteria

— At Home, Favored and Opponent Team Total of 21 points or less —

The Patriots currently lead the NFL in scoring defense and have shown the ability to put up double digit fantasy points over the last few weeks. They do not always produce the upside we are looking for but I think their opponent this week provides that upside. The Jets are still giving up the most fantasy points to opposing defenses in the NFL. Bryce Petty now has four NFL starts, and in those games he has turned the ball over seven times and been sacked 11 times. The Patriots are huge favorites here and the Jets team total is less than 14 points. The Patriots are my favorite cash game play this week and a strong GPP play as well.

The Seahawks defense is another strong unit that does not always produce a ton of upside for DFS. But the Seahawks are second in the NFL in scoring defense, which usually gives them a pretty safe floor. Their opponent this week, Arizona, is giving up the fifth most fantasy points to opposing defenses. This is mainly because Carson Palmer has now turned the ball over 17 times this season and has been sacked 39 times, which is the fifth highest in the NFL. The Seahawks already held Arizona to six points scored and had four sacks when they met earlier this season. This game is in Seattle and I think the Seahawks make another strong cash game play this week.

I just like to note here that the Chiefs play on Sunday and are not on the main Saturday slate. The Chiefs are currently eighth in the NFL in scoring defense but their main value for DFS is that they currently lead the NFL in takeaways with 28. For this reason, they have been one of the most consistent fantasy defenses this season. Their opponent this week, Denver, has turned the ball over 21 times this season and have giving up the third most sacks in the NFL. When these teams met earlier this season, Kansas City put up 13 fantasy points. I think they could repeat that again this week. The Chiefs make a strong play this week, especially in the smaller slates that include this game.

This is where we get into six defenses that fit the criteria that I view all as GPP plays this week and mainly on DraftKings where you can more easily justify the salary difference. The Packers have been one of the hotter defenses producing 10, 8, 19, and 9 fantasy points over the last four weeks. This week they play a Vikings team that has now lost seven of their last nine games. Their offense ranks 31st in total offense and 25th in scoring offense, while giving up 33 sacks on the season. I think the Packers make a strong GPP play this week that will likely go low owned considering all the other options this week.

I do not have a lot to say here as this is maybe the worst matchup of the season with two of the worst offenses in the NFL and two teams that are a combined 5-23 this season. The Rams are the home favorite here and the 49ers have now lost 13 straight games. Their offense has been below average evidenced by averaging only 12 points scored over the last three weeks. The Rams defense has struggled the last few weeks but they have faced much tougher opponents. This is a get right game for the Rams defense and they are a deep, contrarian GPP option this week, although I wish their price provided more of a discount.

The Cowboys defense has come on strong and surprisingly they rank fourth in the NFL in scoring defense. Through the first 11 games they forced just 10 turnovers but they now have forced eight turnovers in the last three weeks. This has led to putting up 14 and 12 fantasy points the last two weeks. Detroit has been pretty stingy this season with fantasy points to opposing defenses, but Matt Stafford is playing with a dislocated middle finger on his throwing hand and has turned the ball over three times in the last two weeks. The Cowboys are another GPP play this week, who I like much better at their price on DraftKings. Also note this is the Monday night game, so they are not available on the main slate. Also, be advised that Dallas has clinched home field through the playoffs. I doubt they rest guys already, but it’s possible.

This is one of those options I look at and doubt I use them, as Buffalo has been a pretty average defense this season in terms of total defense and scoring defense. They do get a good number of sacks though ranking third in the NFL with 40 sacks. Their opponent this week is a Miami offense that is down to their backup QB, Matt Moore. Moore looked pretty good last week but I think there is always merit to targeting a defense, at home, facing a backup QB. The Bills are a contrarian GPP play this week.

With so many options this week, Pittsburgh is another spot where I am not sure if I will fit any shares in my GPP lineups. That being said, Pittsburgh’s defense has been playing well lately, giving up only 14 points per game over the last five weeks, while forcing eight turnovers and recording a whopping 19 sacks. The Steelers are at home here as five point favorites, and while Joe Flacco is not incredibly turnover prone, he has thrown an interception in four straight games. Pittsburgh makes another contrarian GPP option this week, although with the bunched up pricing on FanDuel, I do not see a reason to use them there.

This is the Saturday night game and the chance for a late game hammer on the main slate. Nothing really jumps out to me about this matchup other than Houston has been a pretty solid fantasy defense at home this year, averaging over seven fantasy points per game. The Bengals are also allowing the eighth most sacks in the NFL and Houston is averaging over two sacks per game at home this season. The Texans are another GPP option on a week with a lot of GPP options.

The defense that fit the criteria already touched on nine teams above. I think I could certainly list the Chargers in this spot on the road against the Browns and would not fault anyone for going there. Only the Jets and Rams have been better matchups for opposing defenses than the Browns. But with so many teams that fit the criteria, I will pass on officially listing any other defenses this week and just say Happy Holidays to everyone at RotoGrinders!