Hello Grinders. Week 6 is upon us and things are a little different this week. For starters, we had a Tuesday Night Game this week, which pushed the launch of Week 6 contests a little bit out more than normal. While I don’t expect that to have a dramatic impact in contests filling, I do think it’s worth mentioning and monitoring.

The other elephant in the room is that all major sites have had recent issues in their live scoring feeds. DraftKings took several days to pay out their CFB and KBO contests last week, while Yahoo didn’t pay out their main slate contests until Monday. FanDuel has been the most notable site with live scoring issues as their NFL Week 5 contests didn’t have live scoring at all.

I mention this because I do wonder what the trickle down effect will be this Sunday. Will there actually be fewer people playing on FanDuel this week? Will that potentially lead to some overlay on FanDuel? This is a perfect case of recency bias, and I will be giving extra focus on FanDuel this week in this article as it’s possible volume is a bit lighter on FanDuel if some people feel burned by last week’s situation.

One last thing I’ll mention is if you haven’t already, I highly recommend downloading the RotoGrinders browser extensions here. This will allow you to easily see Margin and Overlay for each contest. Let’s dive in!

I had highlighted the FanDuel $.05 Pooch Punt last week in the Penny Pinchers section, but this week I’m highlighting it in the Overlay Chasers section:

Last week, only 662,965 / 838,323 spots filled up, which is only 79%. This week, FanDuel slashed the seats in this contest down to 718K which is a massive reduction, but it’s still possible we don’t see it fully fill. I continue to highlight this contest because you can 150-max enter it for just $7.50, which won’t break the bank. I’d consider monitoring this contest if you’re searching for overlay.

As for Yahoo’s main GPP, they continue to reduce the number of seats week by week. Last week there were 18,037 seats but this week it’s down to 15,000:

This is going to be the first week I personally won’t chase overlay on Yahoo and instead will be hunting on FanDuel for my overlay.

FanDuel is running its own version of a high-stakes Milly Maker this week with their Deuces Wild contest: 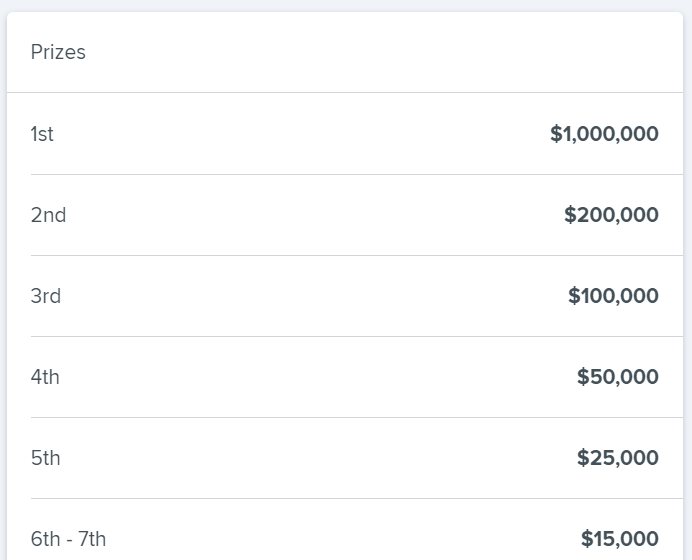 I don’t highlight the DraftKings Tiers contests as much as I should, so this week I’m giving the Flat Structure Chasers highlight to their Triple Option contest as I really like the payout structure: 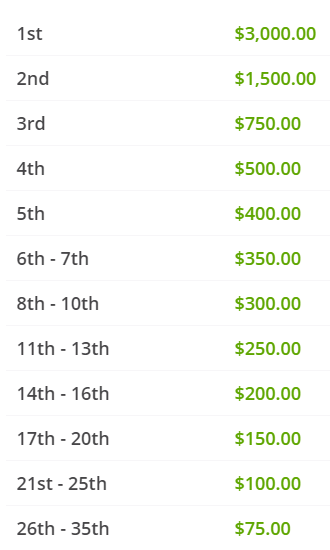 It’s a 3-entry max contest with just $3 per buy-in, so this won’t cost you much. But with 1st place getting just 8.57% of the pot and the Top 10 getting just 22.14% of the pot, it’s one of the flatter structures you’ll see on DraftKings. It also remains one of the softer contests in terms of sharks as you’ll see more casual players in the Tiers lobby as the format of having a set list to pick from is just more attractive to the casual DFS user. Give this contest a look if you’re looking for something not as top heavy this week.

If you’re on a budget I still recommend the FanDuel nickel contest that I highlighted in the Overlay section. But another contest to consider if you’re penny pinching is DraftKings’ Quarter Jukebox:

In terms of single entry contests, my eyes are going to be on the RotoGrinders Single Entry Series on FanDuel:

There are three buy-in levels this week ($5, $33, $100) so you have some options. As you can see, the rake is lower for the higher buy-in levels. The appeal here is that the payout structures are very fair and relatively flat. The added bonus is that the top scorers on the leaderboard will also battle in an online live final, so you’re playing for something more than just the weekly payouts.

You can find more details about the RotoGrinders Single Entry Series here if interested.

Thanks for reading, and good luck this week. May variance (and live scoring) be on your side.