Our analysts break down the main slate in detail, setting you up for success in your daily fantasy football contests throughout NFL Preseason.

Please come and join us in our Discord group chat each slate leading up to roster lock. We’ll talk about DFS strategy, player options for tonight, and the ever-important late-breaking injury news that often impacts the slate in a big way. Come join us!

“We’ve been probably a little more cautious (with injuries) than in years past, and that probably leads people to believe that, ‘Wow, this list is really long,‘”

Don’t expect a lot of playing time for Jimmy Garoppolo. I’d put the expectation at a quarter, which normally amounts to two or three series. In the showdown format, it all comes down to scoring. If he leads a TD drive in his time on the field, then he’s going to have a real chance to be associated with a cashing roster. If he does not, your lineup is likely to burn. He’s a boom-bust play with a low median expectation against a defense with some teeth.

Following Jimmy G, we’ll likely see an even split of Nick Mullens and C.J. Beathard. When you put pen to paper and try to assign numbers on their playing time and efficiency via projections, they look very similar. Thus, I think the proper move is to side with the player who will operate with better supporting options around him. That would be C.J. Beathard, as I think the potential for a TD pass is greater with him under center. He’ll play second per this article.

The 49ers RB situation is flipped on its head compared to last week. We now find ourselves projecting 6 backs, and it absolutely crushes the median expectation for all of them. I will rank them, but I promise you this is so close that you really have to make your own call on who gets A) the targets and B) the touchdowns (if applicable, the number of TDs could easily be zero in this game).

1) Austin Walter – The most disposable option playing latest in the game. The 49ers will be careful.
2) Matt Breida – The best talent appearing sometime in the late first or early second Q.
3) Jeff Wilson – He’s coming back from injury or I might otherwise suspect more playing time.
4) Tevin Coleman – Will make a cameo to start this game but it would surprise me if his playing time was extensive.

Deebo Samuel was saddled with a $3,713.58 dinner check thanks to a rookie tradition in Denver.

The #49ers wideouts had their Rookie dinner tonight. Deebo Samuel takes the $3,713.58 bill for this one. Secure that bag Deebo.

Samuel need to keep catching a lot of footballs in helmets and shoulder pads over the next few seasons to keep up with the expensive tastes of his teammates. Thankfully, he’s likely to spend a bit of time with the ones and a lot of time with 2’s tonight, giving him one of the best target projections on his team. By no means is he a runaway from alternatives like Richie James (will be a primary option later in the game) or Jalen Hurd (another ascending rookie talent who blew up in week 1 for 3/31/2), but he leads the pack by a slim margin to earn top WR honors on the 49ers. The starters will play some in this game, and unlike other teams I don’t know if the 49ers even know for sure who their WR starters will be in Week 1. That leaves players like Dante Pettis, Marquis Goodwin, and Jordan Matthews available as deep darts to throw in the showdown format… we should’t perceive them as bubble-wrapped. This is an open competition.

It’s hard to recommend a TE as a high end play in showdown, but FYI here is the expected depth from my perspective: 1) Ross Dwelley 2) Kaden Smith 3) Tyree Mayfield. Of those three, Mayfield has the least competition for targets and makes for the best dart throw option.

Defenses are always in play in preseason showdown format, and the 49ers are no exception. They will see a good amount of Denver starters, and thus are not as good as their counterpart Broncos. Still, they are well on the table as one of the top plays on San Francisco.

You will never hear me provide kicker takes. Ever. My understanding is that kickers will be appearing in this game, and they’ve been assigned projections in LineupHQ.

I rarely shout out these click-bait-ish fan sites for news or info, but I think the position battles chart on this page is insightful on the state of the Broncos. Check it out if you have a minute.

The Broncos coaches have outlined that Joe Flacco and the first offense will get an opportunity to play “more” in this game, which means we can expect them to at least begin the second quarter on the field. Four to five drives is the range I suspect is most likely. At this level of playing time, he’s absolutely on the table as an option in the single game format. The more challenging aspect of the Denver QB situation is how to divide the time between Kevin Hogan and Drew Lock once Flacco checks out. We can likely cross Brett Rypien off the list. Fangio did not reveal the QB rotation after Flacco, and said it was something they were still deciding. Hogan only received 11 snaps in Week 1, but the Broncos have 5 preseason games this season. It was an outstanding opportunity to get reps for the young QB Lock, and it is no certainty that this split repeats. For now, I’m giving Lock the playing time lean again by a substantial margin. However, just know that the situation has not been clarified by the coaches at the level of playing time I’ll project. Lock would be something close to a core play as projected, but I’m hesitant to advise you to smash the “Lock” button – pun fully intended.

Khalfani Muhammad did not practice on Saturday, which in a way is very exciting for this football game.

I’ll talk about Jackson in a moment, but let’s watch pregame news to ensure Khalfani is indeed out. I’m projecting it as such for now.

While the starters should play beyond the first quarter, this is a time share situation. It hurts Royce Freeman, who will need a TD to help you win this slate. Phillip Lindsay is very viable, as the new Broncos offense will feature a lot of passing work for the RBs. It is fair to expect at least one target for him, with upside. The real story here is the fact that Devontae Booker is nothing but a stop gap for Theo Riddick while he recovers, and Dave Williams is the text book definition of “just a guy.” Devontae Jackson is a developmental player, who is at minimum intriguing for the long term. I would feel pretty good about seeing him a lot late in this game, and getting action in the passing game while out there. I can’t say for sure how popular he’ll be at the moment, but it’s the kind of guy I can get behind in a single game format presuming he’s not on absolutely everyone’s radar. I have a very healthy projection for him to begin the day, and we’ll have to wait and see on Khalfani’s status.

I like Sutton as a volatile dart, as his TD expectation during the first half is fairly high. Winfree and Patrick would be the other two options I’d lean on for exposure to the Broncos offense, with neither one likely to be immensely owned. Patrick in particular is likely to be under the radar, but he’s actually pretty damn good at football. The minor ding to anyone beyond the starters is that Drew Lock is a wild card in terms of how he’ll play, but we’re talking about a one game slate so you’ll have to at least consider these solid athletes for duty on your squad. Winfree has been a training camp winner, and hasn’t given us any reason to believe his role on the team is going anywhere but north.

Let’s talk about my favorite pass catcher on the Broncos, Noah Fant. It’s been quiet for Fant so far…. a little too quiet honestly. It’s not the kind of quiet where we’re saying “Uh oh, maybe he’s not good.” Not at all. It’s the kind of quiet just before an elite athlete erupts volcanically all over the slate. If there is one thing I know about Joe Flacco, it’s that he loves throwing to the TE. Dennis Pitta was a guy he banked on for years in Baltimore, and on scale of 1-10 of how stunned I would be if he doesn’t use Noah Fant until the tires come off by the end of the season… it would be a 9 or a 10. With the starters expected to get some good run in this game, I LOVE the potential for Fant to be targeted in the end zone should this team make it that far. I’ll probably get 20 lineups in tonight, and will be cramming Noah Fant shares into that group until it looks like Noah Fant would if I tried to put him in a clown car in full pads. I will be living or perishing on the output from him tonight.

Last word on Fant: This is just a reminder courtesy of the great people at PlayerProfiler.com as to why I am so excited about him… he’s a man among boys athletically at the TE position. 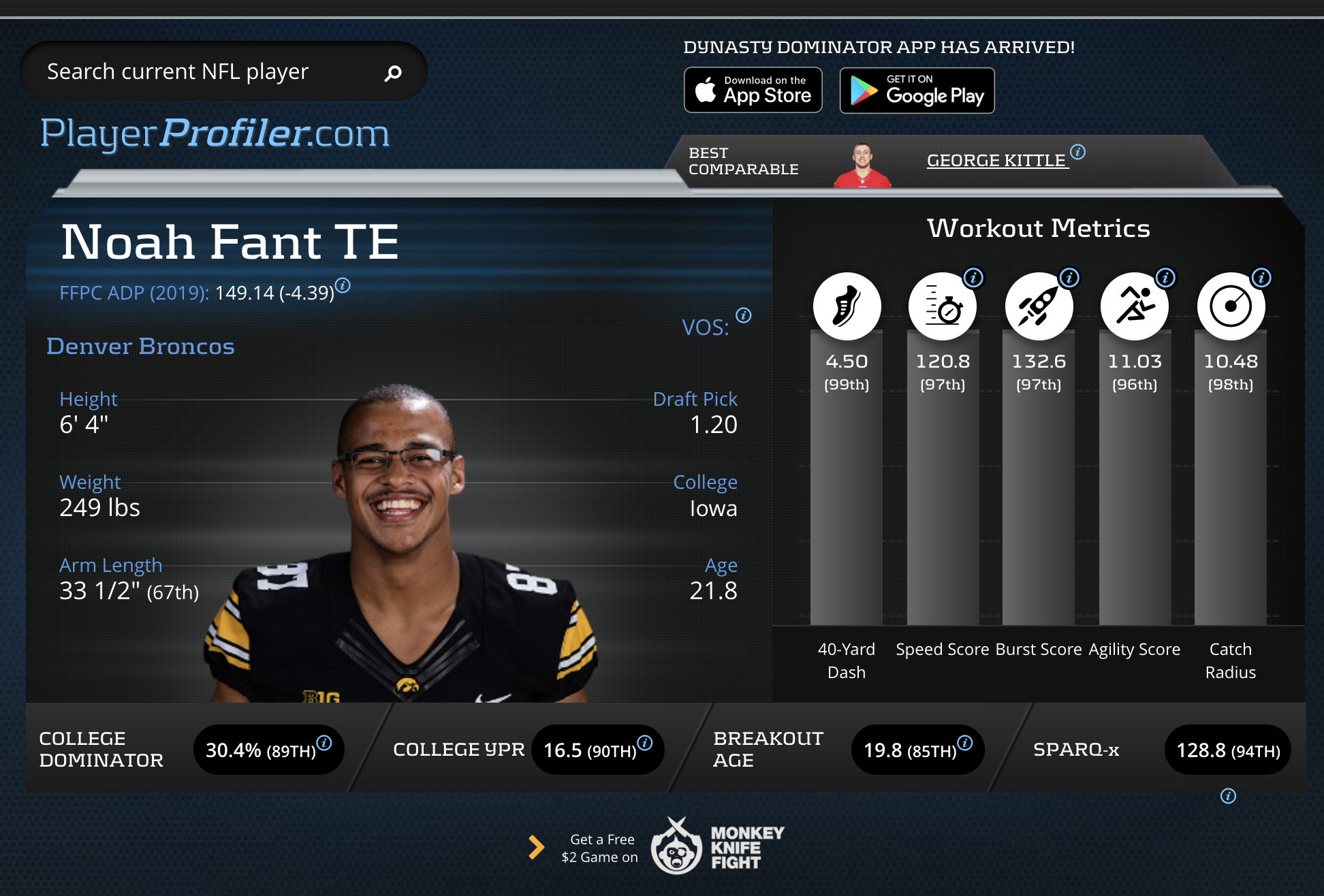 The Denver Broncos defense is a top option on this slate, with a fierce pass rush to start the game and mistake prone QBs at large on the other side. This is not even mentioning the rather questionable depth at the skill positions for SF. Of course the offensive scheme is of quality for SF, but nobody is going to know that scheme better than human beings in Denver… who you may or may not remember from such things as inventing the system when his father Mike Shanahan was in town. Oh by the way, they are also running a similar scheme in Denver and they held joint practices this week getting reps against said scheme. It is nearly impossible for a strong defensive coaching staff to better prepared for a lower level NFL offensive depth chart, and for this reason I would call Denver DST a clear core option.

Once again, I am told there will be kickers on the field… and that they are available for you to use in DFS if you’d like.