Our analysts break down the main slate in detail, setting you up for success in your daily fantasy football contests throughout NFL Preseason.

Please come and join us in our Discord group chat each slate leading up to roster lock. We’ll talk about DFS strategy, player options for tonight, and the ever-important late-breaking injury news that often impacts the slate in a big way. Come join us!

All signs point to the Steelers giving their starters some run in this game. The tweet above by beat writer Dale Lolley suggests a Ben Roethlisberger, Mason Rudolph and Joshua Dobbs rotation, meaning it doesn’t sound like we’ll see 4th stringer Devlin Hodges. Then we have this quote from ESPN’s Jeremy Fowler:

Based on that snippet, it sounds like we can expect maybe 1 to 1.5 quarters of Big Ben and the starters? The last thing I’ll point to is this article from The Athletic which discusses the debate on whether starters should play this game for the Steelers. The article quotes Coach Tomlin as saying “first units are going to play and play significantly.” The article also mentions that Roethlisberger played just 26 plays (10 minutes) last year, two series and 16 plays two years ago and two series and 19 plays in 2016.

Based on previous usage, I’m expecting something similar of possibly two series for Roethlisberger and the starters. Whether that’s enough to do damage in a Showdown format is really up for debate. I’m going to call him a Secondary Option because he can put up enough useful numbers in two series, but I do think his likely limited usage also means we can look to Rudolph and Dobbs as GPP dart throws as well considering they will be getting playing time (and arguably more playing time than Big Ben).

James Conner saw six carries last week so I’m assuming he’s good to go here and will be running with the starters. He averaged 4+ receptions per game last season too so he can get it done a variety of ways. I’m calling him a Core Option with his touchdown equity pretty high and his ability to rack up PPR points as well. While I don’t expect him to play long and he’ll eventually give way to Jaylen Samuels (who had a touchdown last week), Conner has one of the better floors here. Samuels is someone I’d mix in if building a ton of lineups just in case he finds the end zone again this week.

In terms of the receiving corps, there’s an article here about rookie receiver Diontae Johnson. Johnson had a 3-46-1 line last week but got hurt and hasn’t practiced this week. The team wants more looks at him, so there’s a chance he tries to suit up even though typically a missed week of practice would rule out a player. Given he’s on the roster bubble, he may be an exception. He’d be a fine option if he were able to suit up but you’ll want to monitor the news.

Again, there is tremendous risk playing the Steelers starters given they could play just a series or two, but a series or two of JuJu Smith-Schuster is enough to get me salivating like a Pavlovian dog. I’m going to call JuJu Smith-Schuster a Core Option because there is massive upside here, but just know there is a chance of busting too. In terms of the other wideout options, I’m viewing Donte Moncrief and James Washington as Third Tier GPP options. They should be running with the starters and will benefit from Big Ben out there, but like Smith-Schuster, they may not get a ton of playing time. You’re really just banking on them being efficient here with the starting unit.

Vance McDonald is a solid contrarian pivot off all the wideouts on the Steelers. A Roethlisberger/McDonald stack would certainly be contrarian and would sneak under the radar, but you’d need them to find paydirt together. I’m a bit concerned here with the potential low floor as you could get stuck with a 0 if McDonald doesn’t get targeted during his time with the starters, but I’d definitely sprinkle him in if building a bunch of teams.

*Update – I’m moving Jeremy McNichols to a core play over Delanie Walker, who I’m moving to a secondary play. I have not found any news on Derrick Henry so I’m assuming McNichols gets the bulk of running back work today until further notice. 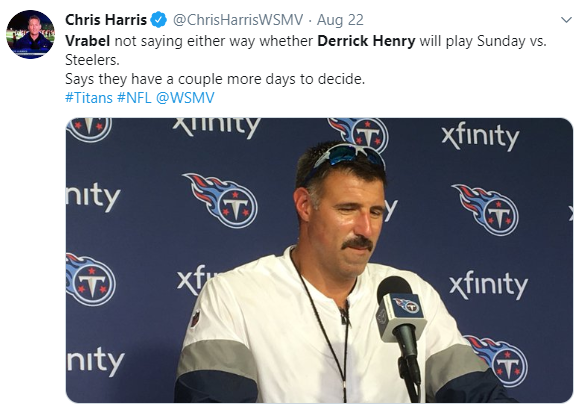 It’s been so frustrating, but I seriously cannot find much information on what the Titans plan to do for this game. I found the tweet above suggesting the status of Derrick Henry is TBD as of two days ago, but two days have passed and there’s been no update. It really seems like Henry is going to be a game time decision and given the uncertainty around him, he’s a Third Tier GPP option for me at best. There’s a tweet here with video of him doing drills saying he’s “making progress”, so he’s definitely not 100% right now and I would be shocked if they risked him here at anything less than 100%.

That also begs the question – how much Marcus Mariota do we get here? The Steelers and Titans actually played last preseason in Week 3, and you can find the box score here. It’s hard to tell how much to read into what they did last preseason, but in that game they only let Mariota play four series, which was roughly 1.5 quarters and he finished 5/8 with an interception and no touchdowns. Instead, it turned into the Blaine Gabbert show who finished 16/24 with 158 yards and a touchdown as he ended up playing the remainder of the game with the exception of the final drive where third-stringer Luke Falk came in.

I’m going to go off the assumption we see a similar game plan here unless I hear otherwise of Mariota for maybe 1 to 1.5 quarters, Ryan Tannehill for around 2 quarters and then Logan Woodside for maybe half a quarter. I’m going to call Marcus Mariota a secondary play but if I’m targeting a quarterback from this game, it’s probably Ben Roethlisberger or maybe even Tannehill as he’s likely going to get some decent playing time as well and is has more upside than either of the Steelers backup quarterbacks (Dobbs, Rudolph) in my opinion. I’m not on Woodside here and I’d expect him to get as much playing time as he can handle next week.

I’ll point out that in that last year’s preseason game, Derrick Henry rushed five times for 12 yards so they were willing to use him last year. If Henry doesn’t play here, my guess is people will flock to Dion Lewis. I think Lewis is a viable GPP dart throw, but I actually prefer Jeremy McNichols. Backup running back David Fluellen underweight knee surgery and isn’t going to play this game, meaning it’s likely we see Lewis split time with McNichols (with Akeem Hunt and Alex Barnes likely mixed in too). I feel like Hunt and Barnes will get a ton of work next week, but this game makes sense to see what they have in McNichols in case Fluellen isn’t ready for the start of the season. McNichols has impressed this preseason, rushing six times for 13 yards while also catching three of his five targets last week for 24 yards and a touchdown. He also had a rushing touchdown wiped out due to a holding penalty, so his line could’ve been much bigger. McNichols is my favorite running back target on the Titans.

My biggest “problem” with the Titans is they have a bunch of viable options: Corey Davis, Adam Humphries, Taywan Taylor and Delanie Walker. There’s a good article here on Walker about how he’s fueled by the doubters. More important in the article is how Mariota loves throwing to Walker:

“Having Walker back is a tremendous boost for Mariota, who likes to find Walker. From 2015-17, Mariota’s first three seasons in the league, no other Titans pass-catcher came close to the 346 targets and 2,695 receiving yards Walker had.”

Walker made his debut last week after his ankle injury and caught both of his targets for 26 yards and a touchdown. Davis and Humphries offer some appeal, but Walker is my preferred target of these wideouts.

I’ll just point out that I’m not too high on the Kickers here. Austin Barnard hasn’t attempted a field goal yet in the preseason for the Titans, while Matthew Wright had a field goal last week while Chris Boswell handled the extra points, so it seems like the duties are being split.

In terms of the defenses, both are strong plays here if the starters are playing around 1.5 quarters. The Steelers did have the 12th ranked defense last season while the Titans had the 19th ranked defense. The Steelers were also tied with the Chiefs for the most team sacks in the league last season (52.0). Given these numbers I do prefer the Steelers defense over the Titans’ defense if choosing just one, and the Steelers’ defense would get a boost here if Derrick Henry is ultimately ruled out.