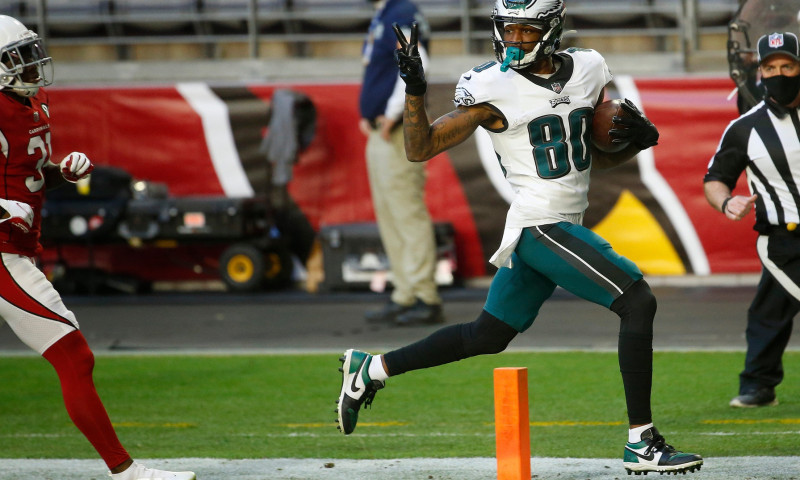 NFL DFS will return on DraftKings and FanDuel Friday with more preseason games, and the following tiered ranking and top picks will help you win your share of the prizes.

Using daily fantasy football projections, our team has reviewed the entire slate in detail. Weeks of preparation have led us to this point, and we are ready to give you the full run down on which players could help you take home the lofty first place prize money.

We track all of the depth charts and all the injury reports to help guide our selections, in addition to any actionable information shared by coaches and beat writers. Combined with years of experience following College Football and the NFL Draft process, we are absolutely locked and loaded in this hard to predict environment.

Desmond Ridder: Ridder has the most clear path to playing time of all quarterbacks on the slate. He can only be used on the Fanduel Main slate however he is very strong there.

Trace McSorley: With Murray and McCoy likely being out for this game, the snaps fall to Trace McSorley. We expect McSorley to have upside to play into the second half on Friday and with his mobility puts him up there as one of the better quarterbacks on the day.

Jordan Love: Love is expected to get at minimum two quarters, with upside of more. Danny Etling is likely not in the Packers long term plans.

Trevor Lawrence: Lawrence is expected to get 2-4 series in this game. That could lead up to around 1 half of action, and this would qualify him as a low end option.

Kennedy Brooks: Brooks and Huntley are the clear best running backs on the slate. With Miles Sanders the only other running back and his snaps likely limited to 1-2 series at best, Brooks and Huntley will share almost the entire game for the Eagles. There is no other backfield as shallow as Philadelphia tonight, as recent signing DeAndre Torrey will at best eat some snaps late.

Jason Huntley: See above. The Eagles are thin and he’ll have significant opportunity.

Tyler Goodson: Even in the event that Patrick Taylor does suit up for Green Bay, the playing time will be condensed for the Packers. We expect both Goodson and BJ Baylor to get extended run on Friday.

BJ Baylor: See Above. Green Bay would be a clear top spot if the Eagles were not so depleted.

Patrick Taylor: He has been banged up with a groin injury during camp and would be even higher up the rankings if fully healthy. We expect him to play as of now and has solid skill.

Travis Etienne Jaguars starters are expected to play 2-4 series, which could lead to 1.5-2 quarters for Etienne. His home run threat capability and pass receiving skills put him on the radar with that level of action.

Ja’Marcus Bradley: Was a touchdown machine at ULL with 10 touchdowns in each of his last two seasons and was featured in the preseason a summer ago for the Browns. With the amount of injuries ont he Brown’s he has been running with the first team in camp.

Romeo Doubs: The star of Packers camp and new apple of Aaron Rodgers eye gets to participate in live action without substantial risk of short stint. It appears a 6 man rotation will play the majority of snaps here.

Kalif Raymond: A lot of the Lions receivers at the back end will not play. Jameson Willians, Cephus, and Benson all could not play. Maurice Alexander was added just a week ago. That leaves the likes of Raymond/Kennedy/Pimpleton to get significant time after the starters depart.

Amari Rodgers: The Packers receiving core is one of the thinnest groups on Friday. We expect The group of Rodgers, Winfree, and Doubs to get most of the game at receiver.

Britain Covey: Covey (who was in college for what felt like an eternity) finally has made the step to the NFL, and immediately started making an impact at Eagles camp. In fact, he has been getting time with the first team and second team offense. With the lack of depth Philadelphia currently has, it is realistic Covey could see a huge number of snaps on Friday.

Javon Wims: A Preseason hero of yesteryear finds himself in a Browns receiving core that is beat up currently. He could get extended run including time with starters due to injuries.

Deon Cain:. Cain has talent and will see time with the likes of Greg Ward and John Hightower missing the game.

Andre Baccellia: Baccellia and Dortch are both listed as starters along with Isabella. Isabella is slightly better, but all 3 of them are definite options on Friday. They all may get work of more than a half of snaps.

Mike Harley Jr.: Harley is just below Wims and Bradley on the depth chart but with so many injuries should receive ample time on Friday.

Greg Dortch: Has been praised for his camp performance so far, and he’ll start for a thin Cardinals receiving corps.

Travell Harris: Finally experienced a very productive season last fall at Washington State (76 receptions). He’ll have his first crack at making the league Friday as the Browns field a condensed rotation of wideouts.

Tom Kennedy His name may sound like an accountant, but his skills are more than adequate to compete in pro football. He’ll be viable thanks to the starters limited allotment and a thin group available to finish the rest of the game.

Kevin Austin Jr.: Austin lead all Jag’s receivers with 62% of the snaps in the HOF game. Even with the starters playing, Austin should still get plenty of opportunities again.

Victor Bolden: A USFL standout who has been showing up well thus far in camp. He is not listed as a starter but should get quality time in the second half

Jeff Cotton Played 48% of snaps in the HOF game and disappointed plenty of DFS players with his performance. Since he’ll still have ample chance later in this game, his bounce-back game could come at low ownership should he improve his fantasy production.

Quez Watkins: The starters will exit after 1 to 2 series, leaving the still young Watkins to play with gunslinger Gardner Minshew and quietly ascending Reid Sinnett with the second group of receivers. Capable of a single slate breaking play thanks to his vertical passing game skills.

*Note: Wide Receiver is a volatile position to begin with, and preseason often enhances that. Please visit LineupHQ for additional deep suggestions for MME players that are viable under the circumstances. Our projections are ranked in tiers.

Kyle Pitts: FD only. With no clear-cut tight ends showing up thus far on Friday, Pitts getting .75-1.5 quarters is very appealing at a position that might struggle to have production.

Tanner Hudson: He’s some how back again! A well known preseason goat, the situation once again looks to be working out for him to be one of the best options on the slate. With Kittle unlikely to play much and Charlie Woerner on the PUP list, Hudson could get an extended run for the 49ers

Jack Stoll: Goedert is unlikely to play much, and guys behind him on the depth chart could get a chance to see huge snap totals. Philadelphia is an offense that typically targets their tight ends.

Evan Engram: Gross. With tight ends being very scarce on Friday, Engram could be an option. Starters are expected to play 2-4 series, and that could lead to some targets for Engram.

Gerrit Prince: Prince led all Jags tight ends in the HOF game with 43% of snaps. Tight end will be very much an issue on Friday as there are not many great options.

Bengals: The Bengals get a full game against Trace McSorley who is mistake prone. After him, we will see Jarrett Guarantano, who might be the worst quarterback on an NFL roster right now.

Cardinals: The Cardinals are expected to get a full game against Browning and Brandon Allen. Two battle hardened, time-tested, elite caliber jabronis.

49ers: The 49ers will get a game mostly led by Jordan Love, followed by Danny Etling. We like to target questionable QB situations, and we’ve got questions about both Love and Etling when paired with this skill player cast.

Packers: The Packers could have a strong defense this season, and the Nate Sudfeld / Brock Purdy combo is not a strong one.

NFL DFS will return on DraftKings and FanDuel Friday with more preseason games, and the following tiered ranking and top picks will help you win your share of the prizes.

Using daily fantasy football projections, our team has reviewed the entire slate in detail including the Green Bay Packers, Philadelphia Eagles, San Francisco 49ers, and Arizona Cardinals. Weeks of preparation have led us to this point, and we are ready to give you the full run down on which players could help you take home the lofty first place prize money.