Searching for a Specialist: WGC-Mexico Championship

EDITOR’S NOTE: Click here to learn how you could win a trip to Augusta with the Tour Junkies and FantasyDraft!

The Florida Swing gets put on hold this week as the TOUR heads down to Mexico City for the first WGC of 2018.

We only have one year of history to look at here, so let’s see if we can dive into the stats to see what golfers should fare well this week.

Last week we were hit-or-miss with our specialists. G-Mac and Horschel MC’d, Kaymer WD’d for the first time in his career. That was the bad, while Lovemark flirted with his first win, Ben Martin hung around the top 15 for most of the week before fading on Sunday and Jimmy Walker grabbed a top 35. Plenty of room for improvement from last week’s Honda massacre.

For the WGC-Mexico Championship, we will look at Performance on Poa Annua Greens, Short Courses, Strong Fields, and No-Cut Events.

We just left the West Coast where poa annua greens were featured heavily.

Golfers that played in Cali but skipped Honda won’t have to make any adjustments.

A common theme here is ball-striking. That’s not really a coincidence because poa annua greens are known to be tricky. If the entire field can expect to make fewer putts, than ball-strikers can flourish, setting up more birdie looks, not needing to knock them all in.

During his recent win Bubba said he liked the poa annua greens because it makes him look as good as the rest of the field on the greens.

Near the bottom, we see Brian Harman and Rickie Fowler more than a shot lower than their baselines on poa annua greens. Pretty surprising for Fowler since he grew up in California. He’s been living in Florida for a long time now, so perhaps he’s lost his touch on poa.

This is not to say these golfers CAN’T perform well this week. Their odds are just a bit lower than most weeks.

This week’s course is 7,345 yards which isn’t extremely short. However, when you account for 7,800 feet of altitude, this course becomes the shortest course on TOUR, in adjusted yardage.

Let’s have a look at some golfers that generally take care of business on shorter layouts.

The Top 10 Short Course Specialists are:

Not a lot of length off the tee on the list above. Most of these guys will be licking their chops to play a course that doesn’t require them to pound drivers.

If we look at TOTAL performance, golfers that have gained the most strokes on short courses since 2014: Brendan Steele, Patrick Reed, Justin Thomas, Pat Perez, and Jordan Spieth. While a Per Round metric is generally better, I also like to look at total performance because it shows a golfers ability to repeat their success and also their affinity for scheduling short courses.

Some golfers are just happy to crack the field this week.

Other golfers are looking to establish their dominance as an alpha dog.

We want the latter.

Matthew Fitzpatrick is an interesting name. His three best finishes on the PGA TOUR have come at the WGC-HSBC or the Masters. Based on his recent appearance on the No Laying Up Podcast, we also know he travels with his TrackMan. I like knowing that he leans on that tool because it will help him dial in his distance this week. He also won in altitude on the European Tour last year.

At the very bottom we see Patton Kizzire. He’s been known as a fall-schedule specialist of sorts. He’s yet to prove himself with the big dogs. On a positive note, he played with Tiger Woods last week at the Honda and said he took a lot away from the week. He said despite the results on the scorecard he was excited to get back out the next week.

We don’t need steady cut-makers this week. We want the guys that have that go-low capability. Without a cut line to worry about, they can fire at flags more than usual which can produce fireworks.

Like I mentioned in the lead-up to the top-10 list, there is so much boom-or-bust on this list. Guys like Pieters, Bubba, JT, and DJ can take it low with the best of them. Give them four guaranteed rounds, and they are likely to post at least one real low.

On the negative, we see Jason Dufner at the bottom. He is more of a grinder that hangs around in the top 20 to 50 range most weeks. He’s certainly capable of popping, but most weeks he’s just going to flirt with mediocrity here.

The specialist this week is Dustin Johnson! 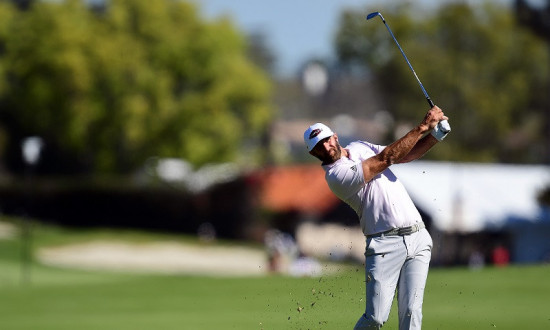 Sorry to disappoint all the readers that were looking for a nice value specialist this week. As we often see with these WGC events, the cream rises to the top and that’s what the numbers are saying again this week.

No-Cut Events are not all that common on the PGA TOUR, yet Justin Thomas has found a way to win FOUR of them, early in his career.

In those wins, JT fired 6-under or better in 9-of-16 rounds. That includes an 11-under 61 at the 2015 CIMB and a 9-under 63 at this season’s inaugural CJ CUP. His ability to fire these ultra-low rounds can’t be ignored any week, especially one with four rounds guaranteed.

I usually love to see some value options in the specialist zone, but I’m not going to change what the numbers say just because they pop out a few favorites.

Looking at the specialist table below we can see there is only one angle that is concerning for Rose (SHORT COURSES). The other three are just slightly below his baseline. I wouldn’t call this a must fade situation, but if you are looking for reasons to fade some of the big names, here ya go. Rosey finished T38 here last year and it wouldn’t be shocking to see him fall outside of the top 15 again. From a baseline performance POV, he ranks 5th in the field. Also important to keep that in mind.

The goal of this article is to isolate course fit, to see who should outperform their baseline.

However, anyone with common sense knows that baseline talent (and current form) can’t be ignored when handicapping golf.

Combining Baseline Strokes Gained with Current Form and Specialist Rating, we get a Top 20 ranking that looks like this:

RCB in the top 5 is certainly interesting here. He continues to be underpriced on DraftKings.

Best of luck everyone!

Below is a table with the full specialist data. Any fields with a 0 in them mean the sample size is not large enough. There is a minimum of 30 rounds to qualify for each angle.

The SG:TOTAL column is a baseline performance measure (since 2014). It is time-weighted, so more recent results count for more than finishes from years ago.

HISTORY column is a weighted performance metric based on course history. I’ve made small adjustments for sample sizes, but be sure to check on number of course rounds before blindly following this number.

FORM looks at the total strokes gained, adjusted to field strength, over the last 8 weeks (PGA TOUR and European Tour).