Sports Card Investing - NBA Targets For The Playoffs And Offseason

We will be focused on some NBA Sports Cards to target for investment ahead of the 2020 NBA playoffs for this weeks article. Before we get into the picks just a reminder that you can sign up for your own Market Movers Subscription to access the data on your own and by using the promo code GRINDERS you will get 20% off your first payment on any subscription. You will want to sign up for Market Movers specifically in order to access the great tools and data, and if you sign up for the annual Market Movers subscription, you will save you 20% on the entire year instead of just the first month. I’ll be adding additional targets at the end of the article from previous articles so you can see if you can still find the cards within the target range.

NBA Targets For The Playoffs And Offseason

Rui Hachimura – Bradley Beal won’t be playing during the NBA restart. That means about 23 shots per game are up for grabs. I think a lot of those shots will be heading Hachimura’s direction as the Wizards roster is pretty lacking. Why wouldn’t the Wizards focus on Hachimura’s development even more as they are highly unlikely to jump up to the 8th seed. This will be a great eight game test for Hachimura to show the Wizards if he can be the go to guy or not. Hachimura also has value because of his large international following. 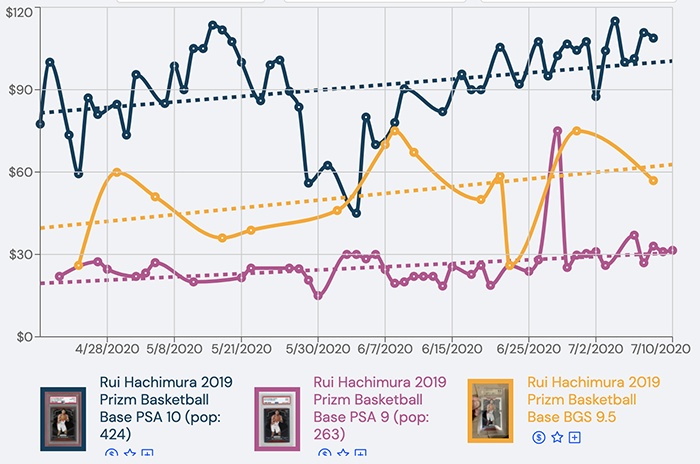 Kevin Porter Jr. – The Cavs have a somewhat of a log jam of young scoring guards with Porter Jr, Garland and Sexton. Sexton and Garland are both going to be fine players but I think Porter Jr’s size, athleticism and finishing ability give him the highest upside. His per 36 metrics are very promising as he put up 15 points, 5 rebounds and 3 assists. All of these numbers are very similar to the huge high regarded RJ Barrett while Porter Jr posted better shooting percentages on in three categories (fg, 3pt and ft). Right now you can pick up most Porter Jr cards for a third of the price of Barrett. I’m also not using the Barrett comparison as a knock. I’m very optimistic about Barrett’s future which means as just as high on Porter Jr if not more. 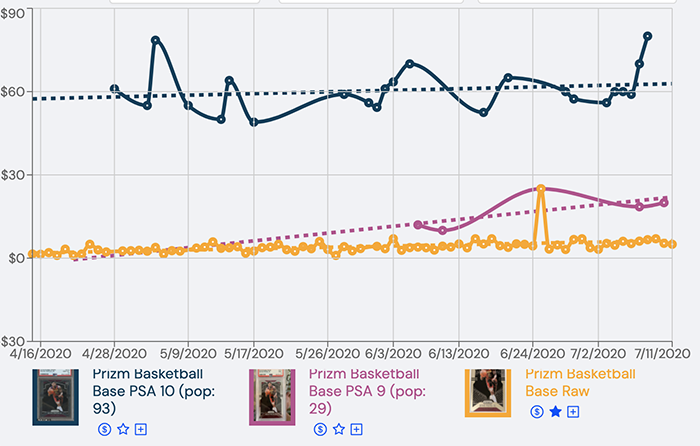 Trae Young – It’s unfortunate but we won’t be seeing Trae Young and the Hawks during the NBA restart. This means that it’s likely we won’t see Trae Young in an NBA game for nearly 9 months. Even though Young is the 2nd hottest rookie from his class behind Luka, there is still time to buy in my opinion. Trae has already shown that he can be a generational talent. While I doubt he ever gets to the Steph Curry tier, he will likely be on whatever tier is right below Steph. The Hawks have a great young core and I think they are poised to be a playoff team for the foreseeable future. Trae’s flashy style and endless range are also built for today’s youtube generation. Buy low now and cash in after Trae’s first 50 point game next season or hold long term as Trae continues to build upon his already accomplished resume. 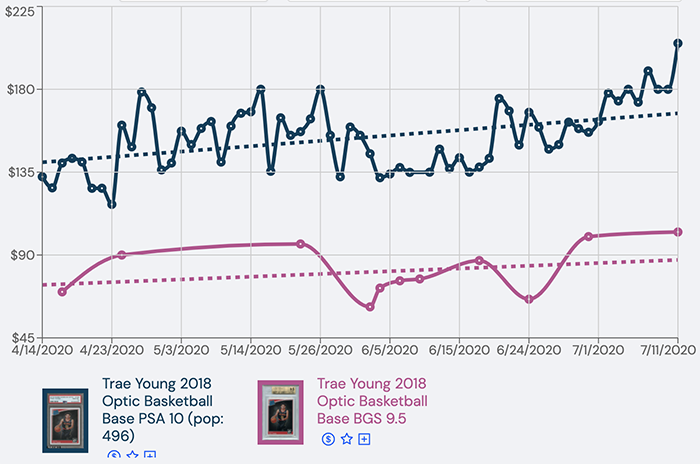 As a new bonus in our articles, we are going to list all the cards from recent articles that you can check out to see if you can still buy at the target prices. Just click right on the links next to the cards to get to the eBay searches. Here are the additional targets we’ve recently featured in our articles: