Over the past few weeks of doing these target articles I’ve mainly targeted higher-priced cards and NFL QBs. I’ve also been putting my money where my mouth is and have pretty much spent my budget for the next couple months. This week I will focus on cheaper players where we can still find value and potentially discover good cards to flip. First a recap of the cards I’ve picked up: 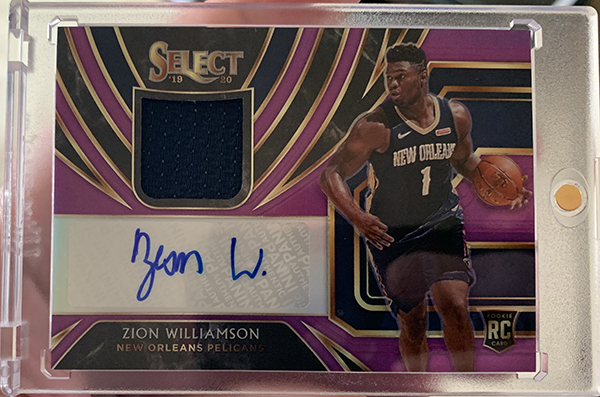 In my article I was targeting the /199 version of the card for the $850 target. I ended up landing the /99 version for the $850 target price so was very happy to win the auction. This is a longer-term hold for me as we see how Zion performs once he has an opportunity to play an entire season. 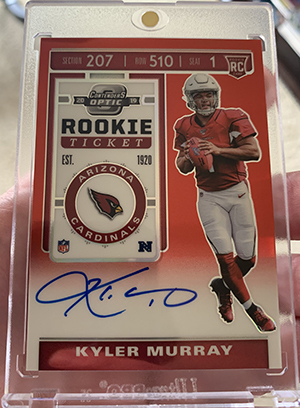 I mentioned this card at the end of the May 7th Sports Card Grinders show. I paid more than I wanted to for it but I felt like the card I bid on looked like it could score a good grade. The card looks even better in person and I will definitely be sending it in to grade. 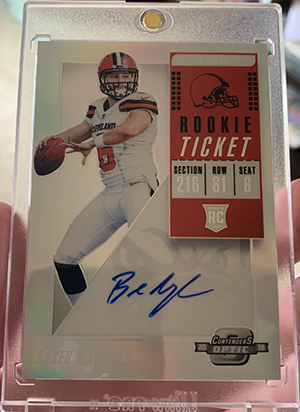 I didn’t have this one targeted anywhere but I’d been looking for it on eBay for a while and finally had an opportunity to buy at the $250 price range I was looking for. It has since sold on eBay for less than that. I’m not happy with the centering on this one, especially compared to the one that sold for less after I bought it. If I was a little more patient then I could have found a better card but after seeing former targets like Dak and Zion shoot up it was hard not to buy when I found an opportunity. Regardless I targeted this because I like the Browns this year, so I think there is plenty of upside.

So now that I have built a longer-term portfolio, I want to focus on potential flips this week. I noticed a couple of fellow investors had been targeting cheaper RPA cards with upside via auctions and then flipping those cards for some nice ROI via “make me an offer” sales. I wanted to try to use this strategy this week targeting Wide Receiver cards. Use target prices this week as the max you would bid in an auction. Ideally you can land cards for well below the target prices and then sell well above them.

We will generally target Panini brands for football as they own exclusive NFL rights for sports cards. Just like DFS, be sure to manage your bankroll and don’t spend more than what your budget allows. Make sure you pay attention to the grading when looking at targets. Grading makes a huge difference in price, so price targets will be based on grading. An ungraded card is referred to as “Raw”. When targeting a Raw card, try to find one with the best centering, corners and edges (and surface if you can tell) as that is a card that might be worth sending in for grading. We’ll use SportsCardInvestor’s Market Movers data to evaluate current-market price targets based on what people have been paying most recently. Go above/below that market rate based on your convictions and confidence levels by player. Be sure to subscribe using this link or use the promo code GRINDERS for your 20% off your first payment with SCI.

5) DJ Chark – Chark was a player I was targeting along with Terry McLaurin in the 18th round last year for best ball. I wasn’t really buying into Dede Westbrook or the other Jags receivers and felt like Chark had explosiveness and an opportunity to pay off. He ended up being the perfect type of player to target in best ball and now I think he makes a great target for Sports Card investing. He showed some good chemistry with Gardner Minshew last season and we want to target familiarity right now due to uncertainty surrounding the preseason and how much practice time players are going to have together. I believe Chark will build on his breakout season this year and we’ve got some nice cards to target at affordable prices. 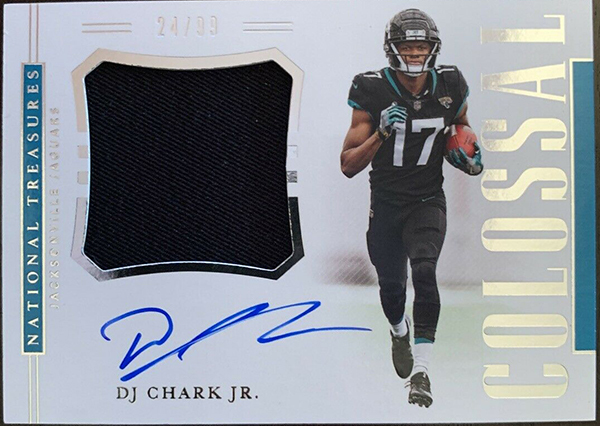 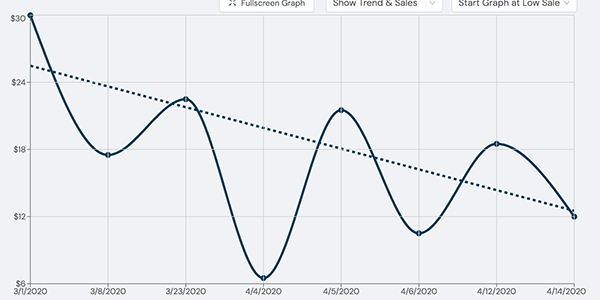 4) Terry McLaurin – McLaurin was a guy I trusted my gut on last year in best ball and it paid off. He was a rookie burner with an easy path to starting mixed in with a pool of veteran scraps in the 18th round. He did not disappoint racking up over 900 yards and 7 TDs in his rookie year. Now he is the clear #1 Wideout in Washington and will get a full season with his former Ohio St QB Dwayne Haskins. Again, this is a WR with an existing chemistry with his QB which is going to be more important than ever this season. 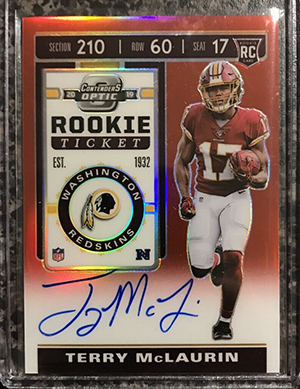 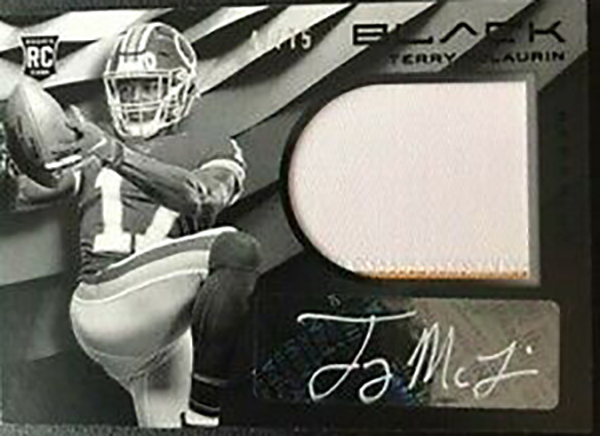 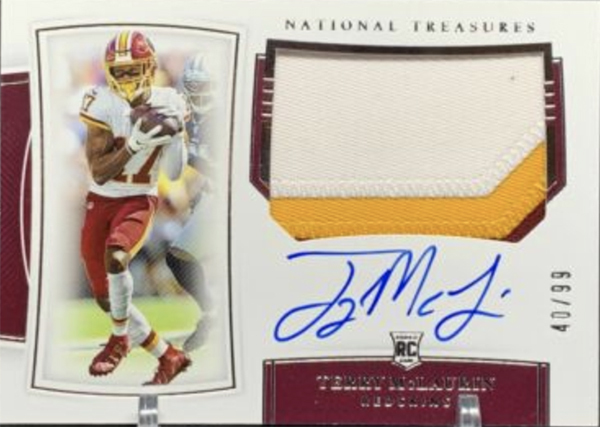 3) Calvin Ridley – Ridley is entering his 3rd year and has surpassed 800 yards in each of his first 2 seasons. He also scored 17 TDs surpassing Julio Jones in each of those seasons. With Julio getting older, Ridley will eventually surpass him as the top target for Matt Ryan. Without Austin Hooper or Mohamed Sanu competing for targets, expect Ridley to surpass 1000 yards this year and continue his TD production. 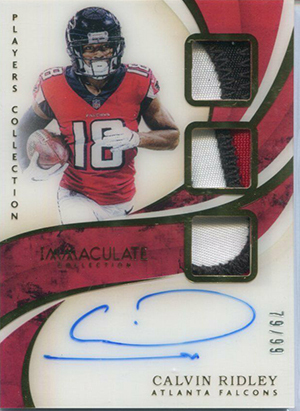 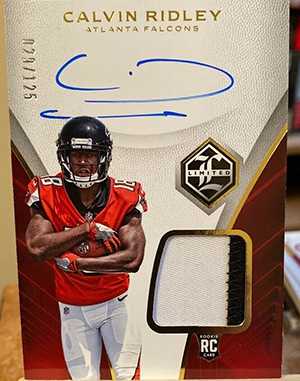 2) JuJu Smith-Schuster/Diontae Johnson – JuJu fell off big-time last year after losing Ben at the beginning of the season. He was unable to develop a chemistry with Pittsburgh’s backup QBs and ended up as a huge bust. This provides us with an opportunity to buy low on JuJu’s sports cards before he reunites with Ben Roethlisberger this year. JuJu broke out big in his last full season with Roethlisberger racking up over 1400 yards so nobody wants Big Ben back more. I’m adding Diontae Johnson in here as well. Johnson looked real good last season despite poor QB play. I believe this situation to be an exception to the rule considering Pittsburgh’s track record of developing receivers so I’m not overly concerned with Diontae’s lack of playing time with Ben. I’m betting this will be a breakout season for the 2nd-year wideout. 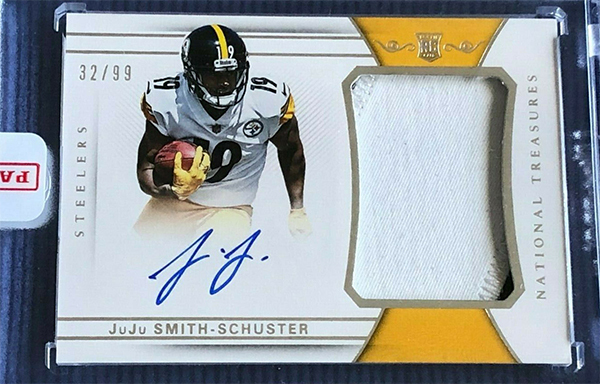 1) Odell Beckham Jr – I’ve named Baker Mayfield in 2 articles so far as a player who’s sports cards we want to target. Now we’re targeting his stud Wide Receiver. OBJ racked up over 1000 yards while playing through an abdominal injury last season to go along with a horrible coaching staff and difficult schedule. The situation in Cleveland was so bad last year that you had Browns players begging opposing sidelines to help them escape. Things look to be settled down this season and Cleveland’s schedule is much easier than last year. After successful surgery at the beginning of the year the stage is set for Beckham to have a comeback year. 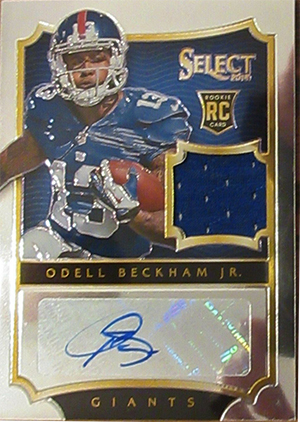 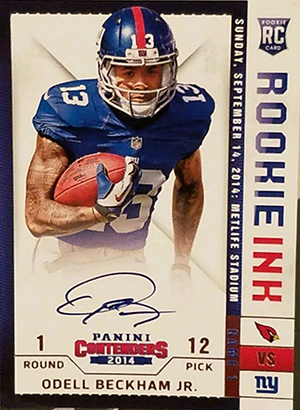