Now that the NBA playoffs are finally here I wanted to touch on a few players that I think you should be looking to purchase. I think the NBA has done an amazing job with everything about the bubble restart. The broadcasts have been entertaining. They are using new camera angles because of the lack of fans that get us closer to the game. The level of play has been amazing and even record breaking in terms of scoring. I’m very excited to see these first round matchups and beyond.

LeBron James – LeBron’s prices continue to rise and rise and rise. I just don’t see that stopping though. He’s arguably the greatest player ever and by far the most iconic player of this era. If he wins a championship as Laker, which I think he will, then his prices should shoot to another stratosphere. His 2019 prizm base card “Lakers Rookie Card” shot up right around the start of the bubble. The price has tempered slightly but I still think this card is a buy if it fits your budget. I was lucky, maybe savvy, but probably lucky enough to snag around 10 of these cards a few months ago for around $5 each. They peaked around $100 each raw and the latest sale was about $60. A few big games from Lebron in round one and these are going to begin another upward trend. I think there are multiple ways to make money on this card if you’re as confident as I am about the Lakers winning it all. If you want a quick flip then just buy graded now and flip during the finals or immediately after the Lakers win. If your in it for the long haul then try to buy raw that are well centered and grade them for a long term hold. 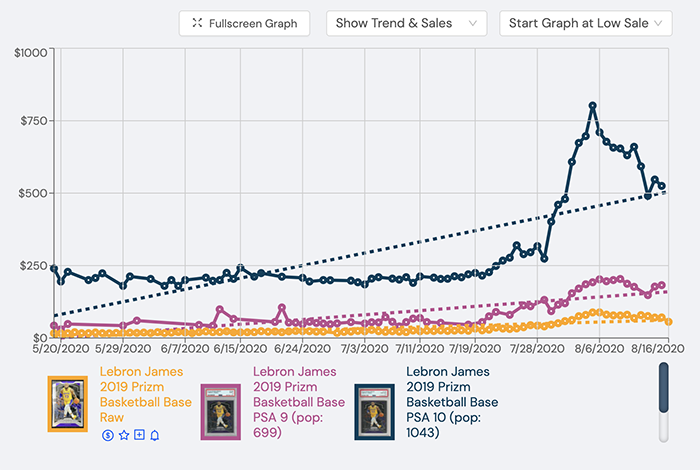 Jayson Tatum – I know I’m not going out on a limb by recommending Lebron and Tatum but I think the Celtics are the darkhouse team to make it to the finals from the eastern conference. If the Celtics can somehow pull that off, it will mostly likely be on the shoulders of Jayson Tatum. He is a budding superstar playing for one of the premiere franchises of the NBA. The type of talent that will likely lead to 10+ all star games and multiple deep playoff runs. By looking at the chart below we can see that his PSA 9 and RAW prices are lagging behind the growth of his PSA 10. I expect those to start to catch up after the Celtics make quick work of the Simmons less Sixers. Their next opponent would most likely be the Raptors. They have had a great season in earning the 2nd seed but I just don’t see them making any kind of noise like they did last year when they had Kawhi. That leaves the Celtics with an ECF matchup with the Bucks, mostly likely. The Celtics are talented enough, deep enough and coached well enough to pull off a win in that series. I personally get goosebumps when thinking about a potential Lakers vs Celtics NBA Championship. An icon in Lebron James nearing the end of his career versus a young up and coming superstar in Jayson Tatum. It would be great appointment television, great sport and great for the hobby. 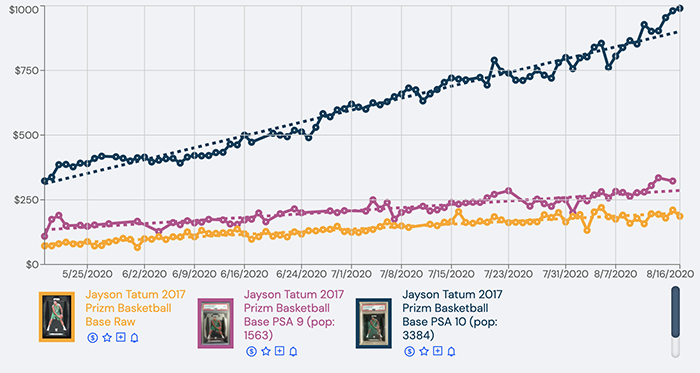