The NBA is back, baby! I would prefer at least four or five games tonight, but I’ll take what I can get after that long layoff.

For today’s Starting 5, we’ll take a closer look at the Defense vs Position tool. I’ll sort by the last three weeks to see which teams are currently struggling to guard each position.

Who better to highlight than the All-Star game MVP, Russell Westbrook? Westbrook is the highest priced player on FanDuel at $10,900, but he also has the highest upside of anyone playing tonight. It’s a dream matchup versus the porous defense of the Mavericks in a game that features a nice 211 over/under. I’ll be targeting Westbrook in the majority of my lineups. 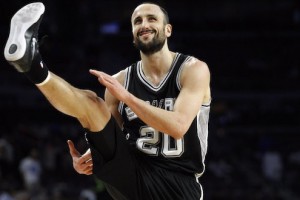 Ginobili and the Spurs have a fantastic matchup for shooting guards tonight as they take on the Clippers, who have allowed the second-most points to the position over the past three weeks. That’s a pretty significant bump up from their seasonal average, which was in the middle of the pack in the NBA.

I love rostering Manu in tournaments because a lot of people fade him due to the fact that he comes off the bench. However, Manu is the leader of the second unit and has 35 fantasy point upside. I’ll take that any day for only $5,100. His legs should also be very fresh after the break.

Kawhi has Durant’s upside for 3K less in a matchup against the worst team in the league versus small forwards. I really don’t think I need to say much else on this one. Kawhi will be in 100% of my lineups. Fade him at your own risk.

The power forward position is a total mess tonight on FanDuel. Blake is out so that leaves Duncan, Ibaka and Dirk. After that there isn’t much else. I really like Dirk tonight though for a bargain at $6,500. I’ll play it safe with him and his 25-30 fantasy point floor. Digging a little deeper also shows up that Dirk went for 44 FanDuel points against the Thunder in their last meeting. 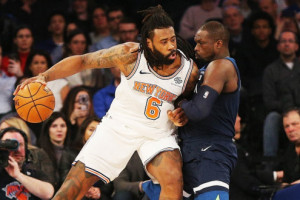 DeAndre has been a monster on the glass ever since Blake went down. He had back to back 20/20 games before the break and he should be able to get close to 20 rebounds again tonight.

The Clippers played the Spurs just recently on January 31st and DeAndre grabbed 19 boards in that game. That was a game that Blake Griffin also totaled 13 rebounds, so some of those rebounds are likely headed DeAndre’s way. I wouldn’t be shocked if he posted another 20/20 game but his floor is still probably a solid 12-point, 16-rebound effort, as none of the Spurs bigs can match his athleticism.

Hopefully this information helps you with your roster construction today and leads you to a nice score. As always, feel free to leave a comment or reach out to me on twitter, @Socky21.