Today I’m going to use the DvP tool, along with some other analysis, to determine the best dollar-for-dollar plays on FanDuel today. 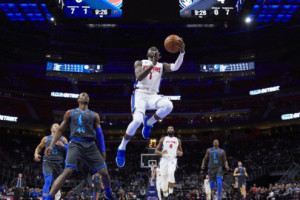 Imagine if NBA were like CBB and we just had to roster guards and forwards. There are so many great point guard plays today, and it’s frustrating to have to pick just two of them. As you can see from the seasonal DvP, the Knicks have been ranked near the bottom of the league against opposing point guards all season. Things don’t get much better when you switch to the last three week view. The Pistons are currently 13-point favorites, so Vegas isn’t expecting things to stay close, and neither do I.

However, Jackson is just too cheap despite the bump to $6100. He has 40+ point upside and is very likely going to torch the Knicks even if he only plays three quarters. This is not a spot where I’m looking to get cute and play the fade, and neither should you. Fading popular expensive plays in NBA can be a profitable strategy, but fading guys who have a very high probability of offering you a ridiculous return on your investment is not.

Butler is very pricey on FanDuel, but he’s likely going to be worth it now that Derrick Rose is out for a while. Also, Pau Gasol has already been ruled out with an illness. Butler sees a significant usage bump with Rose out of the lineup, and now that Gasol’s out too, he’s going to be relied upon heavily to shoulder the scoring load for Chicago. Also, consider how weak the shooting guard position is in general. FanDuel finally moved Tyreke Evans to point guard, so an already grim position just got worse.

You can certainly gamble on the likes of Kentavious Caldwell-Pope, Avery Bradley, JR Smith, and others, but I’d rather look for value at other positions and pay for a known stud. Further complicating matters is the fact that James Harden may miss tonight’s game due to an ankle sprain. Butler draws a terrific matchup against a Timberwolves team that has really struggled against opposing shooting guards all season. If Harden sits, Butler is the top option at the shooting guard position tonight.

Boston has been third-worst against opposing small forwards over the past three weeks, and if you want to take a look at the seasonal rankings, they’re in the bottom ten there as well. The only real issue with MKG is playing time. When he plays heavy minutes, he generally has no trouble returning value on his salary. Occasionally, the minutes aren’t there, but given he’s played 31 and 42 minutes in his last two, I’m going to pencil him in for 30+ tonight.

The addition of Mo Williams has really helped the Hornets in general as well. MKG should see a boost over his typical numbers with Brian Roberts, who was not a particularly good passer. 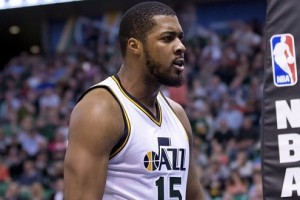 This was Pau Gasol’s spot, but now that he’s out, I had to find someone else. It wasn’t too hard to find an alternative. You’re going to be in good shape rostering pretty much any starting power forward against a Denver team that has been dead last against opposing power forwards all season. I expect Favors to be a more consistent option for the rest of the season with Enes Kanter gone. He’s been around 35 fantasy points his past three games, and we can reasonably expect a bump in production against a team that hemorrhages points to the position.

Power forward really isn’t a great position today, and I think paying for the top options makes a lot of sense.

Denver stinks against power forwards and they stink against centers too. There’s really no reason to look past Gobert at the center position. He’s way too cheap, he draws a terrific matchup against a pitiful Denver frontcourt that will be without both Jusuf Nurkic and Darrell Arthur tonight, and the top center options aren’t very intriguing options.

It makes much more sense to pay at a position like shooting guard where there is simply no player that offers the same sort of value at Gobert’s price point. It also doesn’t hurt that the Jazz will be playing up in pace against Denver, and the game should stay fairly close.