Today we’ll take a closer look at the Defense vs Position tool. DvP is one of the most important tools available when considering players to target on a particular night.

I wanted to highlight the DvP tool today because I really think there are some prime matchups to take advantage of this evening. It’s a big tournament night across the industry, especially with the Mega Slam on FanDuel, so let’s check out some prime targets on this Wednesday. Since everyone always wants some value plays, I’ll stick to a $6,000 or less FanDuel price threshold for all five picks. 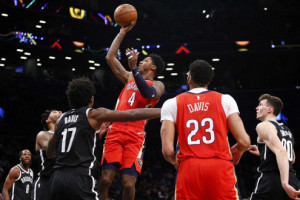 Since the trades of Goran Dragic and Isaiah Thomas, the Suns’ defense against opposing point guards has been surprisingly bad. Brandon Knight is generally known as a good defender, but he oftentimes checks opposing shooting guards with the Suns as Eric Bledsoe plays on the ball more often.

In any case, the Suns rank dead last in defense against opposing point guards over the last three weeks, and they play at a fast pace. Payton is a sneaky target for tournament formats tonight given his ability to contribute in multiple categories.

Kings – 40.28 FPPG allowed to opposing SG for the season

It’s pretty much common knowledge these days that the Kings are poor at defending against the shooting guard position. They have given up several big scoring games to opposing shooting guards, and Danny Green could make a solid value option this evening. The Spurs have had four days of rest since their last game, so they should lean on their starters a bit more tonight. Green hasn’t been that great in recent games, but I expect all the Spurs starters to perform better since they are rested.

SMALL FORWARD – Wilson Chandler or Danilo Gallinari vs. Timberwolves ($5,900 and 5,200 on FanDuel)

Timberwolves – 37.29 FPPG allowed to opposing SF for the season 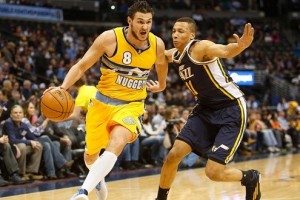 I really like the matchup for the Nuggets tonight. They played much more inspired basketball yesterday after the firing of Brian Shaw, and they draw a favorable date with the Timberwolves this evening. Minnesota ranks dead last against opposing small forwards this season, and that puts both Wilson Chandler and Danilo Gallinari in play this evening.

Both of them are extremely affordable on FanDuel tonight and should have some success against the Wolves defense.

Although I like Gallinari and Chandler, Kenneth Faried is probably my favorite play on the Nuggets this evening. He was really being held back with Brian Shaw at the helm, and he looked liberated in last night’s game with a solid double-double. He should be able to continue that success against Minnesota tonight, as the Wolves are equally bad against opposing power forwards as well. Kevin Garnett is not the answer. Assuming he gets significant playing time again here, Faried should be a solid option at an affordable price.

76ers – 49.12 FPPG allowed to opposing centers for the season 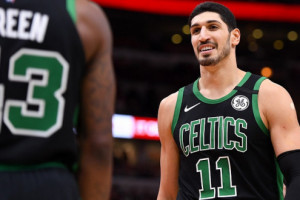 Excluding the game he missed with a minor ailment, Enes Kanter has been a different player since being traded to the Thunder. He has been a focal point in the offense with Kevin Durant sidelined, and he draws a great matchup against Philadelphia tonight. He is one of the safer mid-range plays on the board this evening and should be in line for a solid game here. With Durant ruled out again, he will continue to be an offensive threat, and he should be able to do some damage on the glass as well. Facing the team that’s dead last against opposing centers for the season only adds to Kanter’s appeal here.