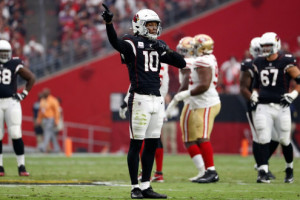 The percentages in the tables below come from the FanDuel $1 Dive, which has 4,597 entries. The listed players are ones that I have identified for a variety of reasons, but if you don’t see “your guy” here, post below in the comments and I will do my best to get you a percentage.

Once again we have Brady at the top of the list with some pretty notable players holding lower numbers this week. I expected to see Eli Manning hold a higher percentage and it might be a case of people worrying more about the injuries at WR than Eli himself.

Another week and another Sam Bradford low ownership percentage. The Eagles passing attack has looked a lot better as of late and if he can manage to keep it together in the red zone, Bradford is a very solid lower owned option.

Either people didn’t see the report on Lewis today or they simply don’t think it was enough to take him out of their Thursday lineups. Regardless, that is something we need to keep our eye on and will shift the RB numbers quite a bit if he is ruled out for some reason.

Both Bell and Foster are under 10% here, but we need to remember that Devonta Freeman is over 50% owned and we will likely see more of each of the top options on Sunday. If you are looking for a low owned player nobody seems to like, then Melvin Gordon facing a Green Bay defense that has been extremely friendly to opposing running backs is worth a look.

It seems as though people were sufficiently scared off of Maclin. One week after having one of the highest ownership percentages, he has dipped all the way down to 7% in a good matchup. Likewise, Jordan Matthews appears to be under owned here with a very good slot matchup against Trumaine McBride.

One of the most interesting plays is Antonio Brown, who has asked Vick to trust him to make plays. He only saw six targets on Monday, and I expect we will see the Steelers forcing him into the action this weekend.

I had to go back and double check that I didn’t mess up the numbers here. Sure, it makes sense that at his price, Gates number would jump as people chase the points. What surprises me is that Eifert has also jumped Gronk this week. Any time you can get Gronk as anything but the outright ownership leader, you have to consider him strongly.

Looking for a sub $5K guy this weekend? Take a look at Carrier, who I expect to see a jump in targets this week, and TE will always be a threat in a Cousins-led offense.