Every shot matters. That was true today as Justin Thomas had the win all but wrapped up in the clubhouse at -8. Kevin Kisner was at -6 and needed a miracle hole out eagle to tie for the lead. Here is how the Milly Maker standings looked at this point… 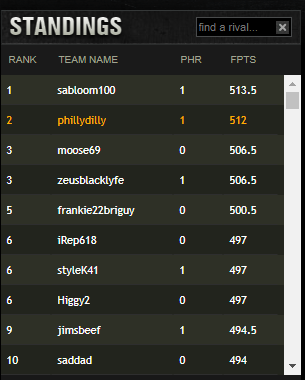 Kisner was aggressive with his second shot but it went left and into a creek. A few shots later he would end up with a double bogey dropping him from a tie for 2nd place to a tie for 7th place. Did that change things in the Milly Maker? You bet it did… 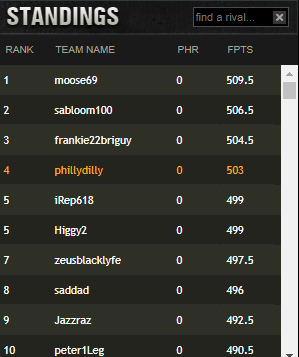 How much money changed hands there?

Moose69 is our newest DFS millionaire – congrats and here is his winning lineup. Thank you for following along. Anyone that responds in the comments before 8 pm ET (you can post anything you want – any response will qualify) will have a shot at winning a RG swag pack of t-shirt, hat, and deck of cards. I’ll announce the winner in the comments later tonight – make sure to check back to see if you won!

And for those wondering – Notorious would end up 3rd place (fortunately the Kisner double bogey didn’t cause him to fall further) for a nice $75,000 payday. 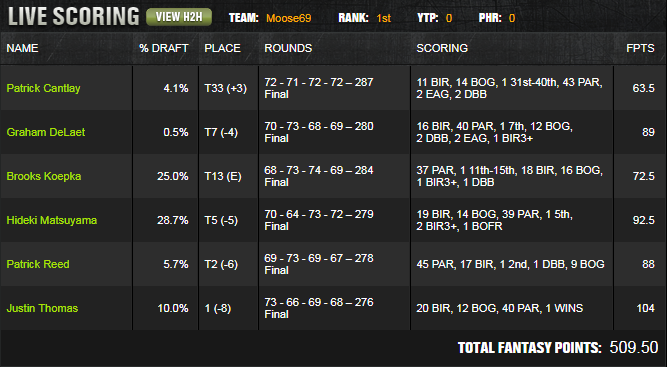 Matsuyama and Kisner are through 15 meaning we have three holes of golf (barring no tie at the top) left before we determine our latest DFS millionaire! Currently it’s sabloom100 on top with moose69 2.5 points behind and frankie22briguy 7 points behind. Another eight players are within 20 points of the lead and as we’ve seen already, any one of them could see a massive swing barring how the final golfers do. We’ll have the final standings and the last swag giveaway at the conclusion of the PGA Championship! Notorious and CSURAM88 are now tied for second place with Brunoruno comfortably in first by 20 points – it looks like he has that $150,000 first-place prize money locked up.

Whoa crazy crazy. The golf tournament itself is nuts with Justin Thomas now all by himself in first place and an amazing five golfers (Molinari, Reed, Matsuyama, Stroud, and Kisner) just one shot back. The Milly Maker itself is similar as Frankie continues to lead but he was in 16th place just a moment ago. With that many golfers one swing away from moving up or down a spot in the standings, the DFS standings will swing as well. Stay tuned for the exciting finish! CSURAM88 has passed Noto and is now in 2nd in the Thunderdome, a $25K pay difference – certainly not chump change.

We’re coming down the stretch as the golfers are now on the back nine. Frankie22briguy has emerged from nowhere to take the top spot in the Milly Maker thanks in large part to strong rounds from Molinari, Rickie Fowler, and Patrick Reed. There’s definitely no room to breathe a sigh of relief though as 8 others are within 10 points of the lead. Brunoruno has pulled away in the Thunderdome with a 17 point lead thanks to Matsuyama and Justin Thomas (now in 2nd overall) over Notorious while CSURAM88 lurks right behind Noto in 3rd place. Last but not least, it’s all but a virtual certainty that rikloe will win the FantasyDraft Live Final and $10,000 and our boy gneiffer07 will end up in second for a nice $5,000 payday. Congrats Grant!

Second to last swag giveaway – CSURAM88 is a former GrindersLive host. What month and year was his last GrindersLive? First person to comment (no repeat winners) wins a RG t-shirt. Stay tuned for the last giveaway – it’s a t-shirt, hat + deck of cards!

A new leader in the Championship also means a new leader in the Milly Maker as Hideki Matsuyama now in first means sabloom100 is now in line to win the seven figure first-place prize money. It’s far from over though – anyone within 20 points realistically has a shot as all it takes is one eagle or double bogey to shift fortunes. Here’s the current top 10 and sabloom’s lineup. That change also means that Notorious has fallen to 2nd as Brunoruno has Matsuyama to his Kisner. 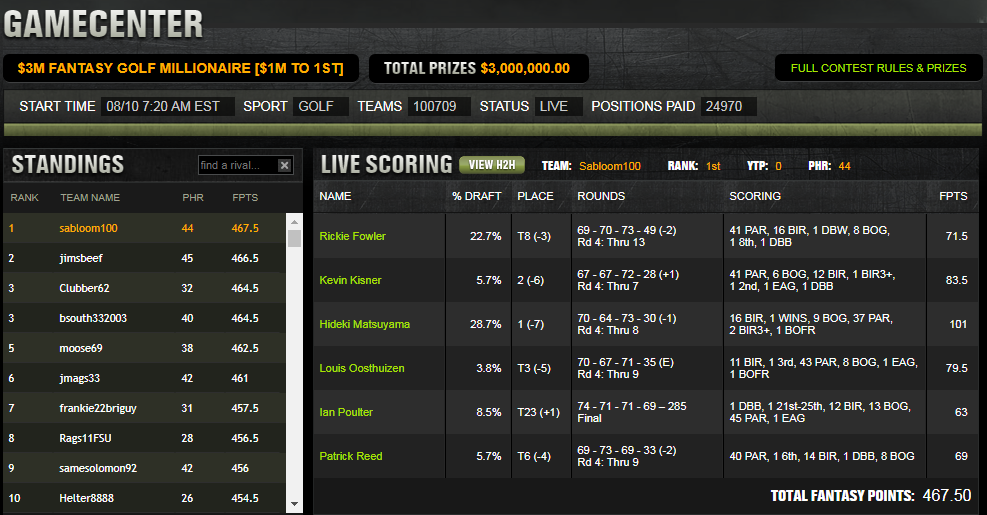 Clubber62 holds just a 2.5 point lead on jimsbeef and has 15 less PHR – this isn’t necessarily a bad thing but his current golfers are going to need to finish strong for him to hold onto the top spot. Notorious has a slim lead of his own (1 point) over Brunoruno and that looks like it will come down to a Kisner (on Noto’s team) vs. Matsuyama (on Bruno’s team) duel – one that Kisner is currently winning.

Time for another giveaway – we’ll probably do two more of these today so this will be one of your last chances. Who is the highest owned golfer in the Milly Maker that did not make the cut and what was his ownership percentage? First comment wins and no repeat winners again!

We have a new leader in clubber62 but it’s anyone’s Million as the top 10 are all within 15 points of one another. Here’s a look at the current standings and clubber’s lineup that consists of a low-owned (for him) Jason Day, Molinari, Kisner, Kevin Chappell, Leishman (who finished the day -4), and Matsuyama. REDCOAT85 is back in the lead in the Thunderdome but by just a point over Notorious and Brunoruno. The top six there are all within 10 points so that too will come down to the wire.

Notorious has regained the top spot of the Thunderdome with early birdies from two of his golfers (Molinari and Woodland) and a slight recovery from Finau (still +3 on the day after being +5 at one point). It’s close though and it’s going to come down to the Kisner/Matsuyama battle. Jimsbeef continues to lead the Milly and with the aforementioned Woodland and Molinari being two of his five remaining golfers (DJ has finished with a -4 round) he’s in good shape with both Kisner and Matsuyama also on his roster along with Oosthuizen.

Who’s still with us here? The first person to comment with my RotoGrinders PGA ranking (I suck and only play the majors) will win a RG t-shirt! No repeat winners (we’ll give everyone another chance towards the end)!

Jimsbeef still holds the top spot in the Milly with D.J. as his only lone golfer and at -4 through 17 he’s off to a great start with his remaining five golfers all in the top seven heading into today. Clubber62 is currently in 2nd with a solid -3 round from Marc Leishman leading his early golfers and frankpapa1, sabloom100, and jmags33 round out the top 5. A poor +4 start from Tony Finau has led to Notorious dropping into 4th place in the Thunderdome while REDCOAT85 continues to hold onto the top spot. aliabduljabbar and DraftCheat round out the top three. Gneiffer07 continues to hold onto a comfortable 2nd place standing in the FantasyDraft PGA Live Final. Things should start flying soon as the leaders start to get underway.

Jimsbeef continues to lead the way as Dustin Johnson has remained steady and is -3 after 14 holes. Jmags33, sabloom100, jbads32, and dabear20 round out the top five while start of day leader bsouth332003 had dropped to 7th. There’s still lots of golf left. In the Thunderdome, Notorious has dropped to second place as REDCOAT85 has three golfers on the course accumulating fantasy points right now (to Noto’s one as his second golfer has just teed off).

Currently in the Thunderdome, there is a former GrindersLive host in the top 10. First person to post his DK username in the comments will win a RG t-shirt.

The top four in the Milly Maker remain the same as the last update as all the players only have one golfer currently on the course – that will change soon. The same goes in the Thunderdome where Notorious has a 6 point lead over REDCOAT85 but many more PHR left. Grant is settled in nicely in 2nd place at the FantasyDraft live final but he’s going to need a minor miracle to catch the current leader rikloe as he had two golfers miss the cut while rikloe only had one.

Speaking of… first person to tell me the two golfers of Grant’s that missed the cut will win a RG t-shirt. No repeat winners! We’ll do our next update about 1 pm ET as I wait for more golfers to get on the course. Once they get going, I’ll be doing more frequent updates.

I’d be remiss if I didn’t mention that our very own Grant Neiffer is taking part in the Fantasy Draft Golf Live final with a shot at a $10,000 first place prize. He’s currently in second but has the most holes remaining of the four finalists. We’ll keep up with Grant’s progress throughout the day (link to contest at top of article).

Here’s how Grant plays golf if you were wondering…

Dustin Johnson’s hot start (-3 through 8 holes) has propelled jimsbeef into the lead and moved jmags33 into 2nd place. Ian Poulter is off to a good start (-2 through 2 holes) and that moved Sabloom100 into 3rd place with the start-of-day leader bsouth now in 4th place (his lone golfer on the course right now is Jordan Spieth). Notorious continues to lead the Thunderdome but current 3rd place player Brunoruno has yet to half a golfer tee off so he’s going to need McIlroy (-1 thus far) to post a good back nine.

First person to post who won the PGA Championship in 2016 will win a RG t-shirt. No repeat winners. :)

We’re here with out first update of the day as the leaders will tee off here in an hour or two. Bsouth332003 continues to hold the lead but he is now tied with jimsbeef who has a solid start from Dustin Johnson (-1 so far through 5 holes). Notorious continues to lead the Thunderdome as his only golfer on the course so far is Rory McIlroy who is also -1 so far (through 6 holes).

Let’s give away a RG t-shirt. First person to respond with Notorious’s lowest owned player AND the percentage it is in the Thunderdome will win.

We’re going to be here all day sweating the Millionaire Maker on DraftKings as bsouth332003 holds a slim lead heading into final round play. We’ll post periodic updates throughout the day starting at approximately 11 am EST, along with some swag contests in the comments section, so make sure to check in and see who makes a surge up the leader board and if one of our own can take down the big money. We’ll also be keeping an eye on the Thunderdome contest as our own Notorious is currently in 1st in that contest! Here’s a look at the current standings heading into today and the current leading lineup.