It’s a good rule of thumb – unless of course, your process sucks.

My process used to suck. Early in the week, I’d look through the slate and make a lineup that looked pretty good to me. Then I’d listen to a podcast and they’d mention a player, and I’d say to myself, “hot damn, that’s a pretty good idea”, and then I’d swap that player in. Then the next day I’d read a column, and it would talk about why another player was a really good play. So then I’d swap that player in, too. Then I’d talk to some buddies about the slate, and invariably one would say, “well, you gotta play this guy, or else you’re a fish”. I sure didn’t want to be a fish, so I’d get that guy in too. And by the end of the week, I had a lineup.

That is not a process. That’s a hodgepodge of different ideas smashed up and rolled into a lineup I hoped would win on Sunday. And you know what? It didn’t work.

These days, I have a much more streamlined and consistent process: On Tuesday, I begin doing research and creating a player pool, which I enter into an Excel spreadsheet. By Wednesday, I have four to eight players from each position that fill both my matchup and my archetype requirements. I then rank those players while sorting them into priority-play and secondary-play tiers, and then use those lists to build lineups and write this column.

This process has also made me a much stronger GPP player. I used to make GPP lineups by starting with a stack, then plugging in a few more plays I liked until I had maybe two cheap spots left. Then I’d search the player pool for a couple players who fit the lineup price-wise that I thought were okay. And you know what? It didn’t work.

These days, I have my post-research spreadsheet and make lineups based off of it. I don’t plug in a player just because I need a guy who’s $3900 or whatever. If it’s not a player I’ve researched and decided is a strong play, I’m not playing him. Because the reality is that if you want to hit on a GPP lineup, pretty much every player in that lineup usually needs to smash hard.

Having a consistent research process and finalizing a somewhat small player pool that you feel good about is key. Your chances of binking a GPP are super slim if you’re constantly diluting it with meh players just because they fit, or you’re trying to fit in every stack you think is good. If you’re not a max-entry guy (and I’m not), you need to do the work and take a stand on the spots you really feel strongly about. Last week, for example, I was all-in on the KC/PIT game. If it didn’t hit, I wasn’t going to make money that week. But what I didn’t do was try to make stacks from a bunch of different games, and pray one of them hit with the exact players I’d filled the lineup out with. Instead, I took a game I loved and made a bunch of different lineups centered around it. Look, we’re not playing the lottery here, and if you approach it like you are, those are the odds you’ll be giving yourself.

If you want to be a strong DFS player, you have to develop your own process – one that works. Regardless of what podcasts you listen to, or what columns you read, or what research you do, create a process that works for you and nail down your player pool before you start making lineups. It’s more streamlined, it’s more effective, and frankly, it’s much easier.

On a typical NFL week, I put together multiple cash game lineups across multiple sites which will have significant player overlap. I diversify to hedge on the players I don’t feel as strongly about to reduce variance in a game where it’s inherent. The players I feel strongest about will be in the majority of my lineups – these are my “high exposure” picks. The “moderate exposure” players will be in roughly half of my lineups, and the “GPP” picks are higher-risk, high-reward plays that I believe will be under-owned by the masses. I can’t write up every single player I’ll be using in time to put this column out on Thursday, but I’ll do my best to give you the most pivotal plays I can. The rest is up to you.
Without further adieu, let’s get onto this week’s picks. 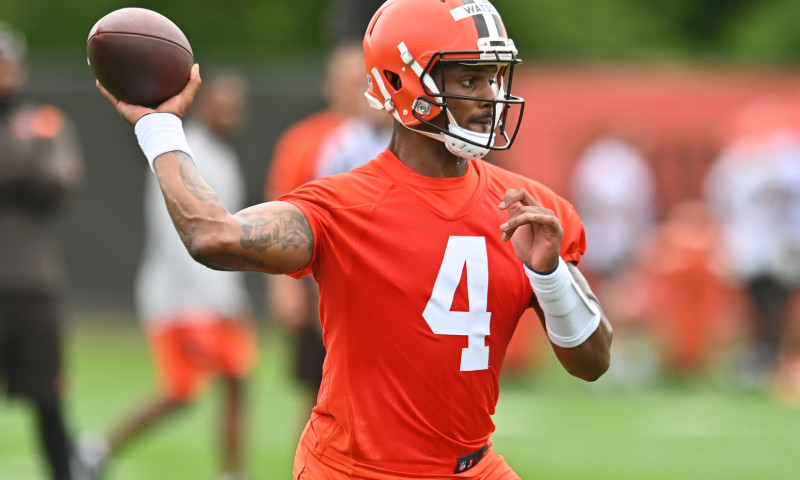 DESHAUN WATSON vs NYG – In his five career games with both Will Fuller and DeAndre Hopkins in the lineup, Watson has averaged 296.2 yards and and 3.6 touchdowns per game through the air alone. He’s also rushed for 40+ yards in both of his games this season and faces a Giants defense that features more gaps than a meth head’s smile. He’s Cam Newton with better weapons, a better matchup, and on most sites, a better price.

COREY CLEMENT vs IND – Jay Ajayi and Darren Sproles both missed practice on Wednesday and Thursday with injuries, which would appear to put Clement in line to be the Eagles’ main man in the backfield in a spot where they are 6.5-point home favorites against the Colts. If this scenario holds, you’d have to be dumber than a box of Walmart patrons to fade him in cash.

LATAVIUS MURRAY vs BUF – If Dalvin Cook can’t go, Latavius becomes an insta-jam in DFS, owing to his low price and a Bills defense that has allowed a league-high four rushing TDs this season after allowing a league-high 22 rushing TDs last year, all while allowing an average of 123.3 rushing yards per game over that timespan. As 16-point home favorites, the Vikings run game is ready to defecate all over the Bills like members of the Bills Mafia will do to each other during the pregame tailgate party.

KAREEM HUNT vs SF – Sure, Hunt hasn’t exactly lit it up over the first two weeks, but he’s played over 70% of the team’s snaps and received 84% of the team’s backfield opportunities. His price is down to a point where his current lack of passing game usage isn’t a boggle, and pairing him with Mahomes is a really strong way to give yourself a high floor in cash games.

They told Alf don’t you ever come around here
It’s gonna be a shoot-out, ya better disappear
Matt will be on the field catchin’ passes, it’s clear
So Breida, just Breida

Don’t try to run, you’d better pass while you can
Just dump it to the flat, don’t be a macho man
Get it into his hands and let him run like a man
So Breida, game-script gonna be bad

JULIO JONES vs NO – Julio leads the NFL in team target share (39%). He leads the NFL in air yards share (71%). He leads in weighted opportunity rating (1.09). Oh yeah, he’s also the NFL’s all-time leader in receiving yards per game (95.7, 2.1 YPG more than any other receiver). It just so happens that the Saints have allowed 558 yards to opposing WRs through two games this season – nearly 100 more than the next-worst team. Julio could be $2,000 more and might still be a lock. Don’t screw this up.

NELSON AGHOLOR vs IND – Agholor has seen 22 targets and a 27% team target share through two games, and may in line for even more work with Mike Wallace on the shelf. He’s the #1 target on a great offense that is getting its star QB back this week, yet he’s thousands less than other WRs with similar workload expectation.

COREY DAVIS @ JAX – Yeah, I know what you’re thinking … “Sammy, you have done smoked yourself senseless”. While that may or may not be true, just hear me out, okay? Look, this is 2018, not 2017. The Jags’ pass defense was incredible last year, and while I’m sure they’ll be really good this year too, that doesn’t mean they’ll be a defense you can’t play WRs against at all. So far, they’ve allowed 40.2 PPR points to opposing receivers, just the 11th-best mark in the league. It’s good, not amazing. Hey … you’re still listening, right? Okay, cool. So, Davis has been one of the most heavily-targeting receivers in the NFL so far, racking up a .81 weighted opportunity rating (a combination of target share and air yards share) that is just .01 less than Michael Thomas. And on DraftKings, Davis is less than half his price!! Isn’t that amazing? You guys? You stopped listening, didn’t you? Well, whatever. I’m playing Davis.

UPDATE: Doyle has been ruled OUT for Week 3.

– While Eric Ebron has caught the tuddies thus far, it’s Doyle who’s seeing the volume, playing on 93.9% of snaps and racking up an 18% team target share, compared to 37.1% and 11% for Ebron. I expect Philly to be ahead in this game, and with their fierce pass rush, that should lead to a ton of short, quick passes for Indy. That sets up well for Doyle, who could see seven or more targets for a bargain basement price tag.

VIKINGS vs BUF – You don’t need me to tell you that the Vikings have a sick defense with an 8.8% adjusted sack rate, a top-10 mark in football. You don’t need me to tell you that the Bills have an implied team total of just 12.3 points, the lowest … wait … I already do this schtick earlier in this column, didn’t I? Damn. I mean honestly, I was hoping you’d forget. And you’d be like, “Sammy, that’s so funny and clever. And thank you so much for telling me that it’s ok to pay up for MIN in cash. That’s really some incredible insight. You’re the GOAT.” And I’d be like, “that’s cool you guys, thanks. It’s no big deal, really.” Can we just pretend that’s what happened?

KIRK COUSINS, STEFON DIGGS and/or ADAM THIELEN vs BUF – Because the Vikes are such big favorites against the hopeless Bills, the RBs are the safe volume plays – but it certainly could be that the touchdowns are scored through the air. The great thing about stacking the Vikings is that their volume tree is so narrow; Diggs and Thielen have combined for 53% of the team’s total targets.

KENYAN DRAKE vs OAK – I believe in Drake’s talent, and Oakland’s defense is so bad that I wouldn’t be surprised if we eventually learn that they’ve secretly been trotting out Al Davis’s corpse for 50% of snaps on the sly. And while Frank Gore has been eating into Drake’s work, KD has still seen 25 carries and eight targets through two games, and it’s his big-play ability that we’re chasing in GPPs. In this game, I’m banking that he breaks a big one.

JOHN BROWN vs DEN – Among wide receivers available on the main slate, Smokey ranks fifth in total air yards with 268. He’s cheap, he’s good, he’s got a great nickname, and the Ravens have chucked it 89 times over their first two games. Sure, it’s Joe Flacco who’s doing the chucking, but life ain’t perfect, you know?

GEORGE KITTLE @ KC – When’s the best time to play a cheap TE who leads his team in targets and weighted opportunity rating? If you answered A) When he’s on the other side of an offensive juggernaut, B) When he’s working against a secondary that has allowed 103 more receiving yards than any other team, or C) The week after he busted as the chalk, then you are correct and are awarded all the points.

Thanks for reading, everyone! Let’s go make some money in Week 3.