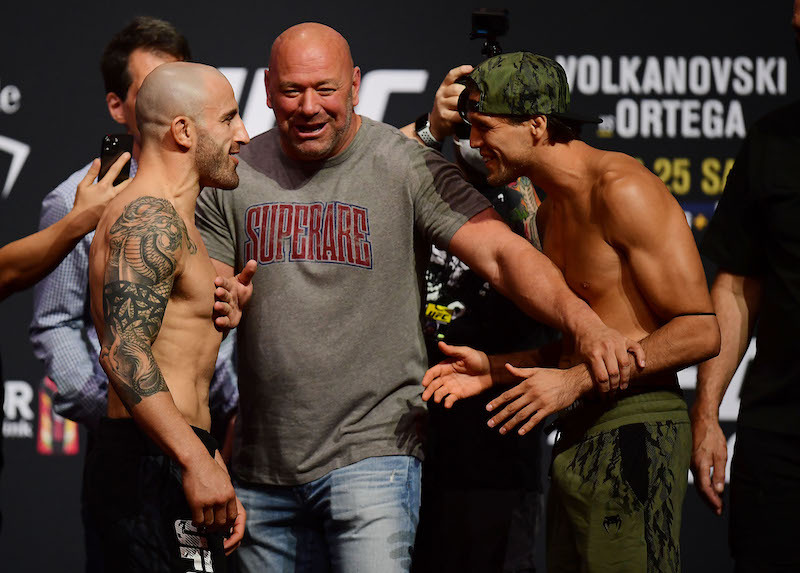 MMA betting analyst Liam Heslin previews UFC 266 odds for Volkanovski vs. Ortega and Shevchenko vs. Murphy. Dive in deep with Liam as he gives you his predictions & betting picks for Saturday, September 25, 2021.

Plain and simple, UFC 266 is a banger of a card. While every UFC card offers competitive mixed martial arts action, not every card offers the high stakes matchups, the unique storylines, and the character intrigue of a pay-per-view attraction. This card will feature two championship bouts, fourteen ranked fighters, and a rematch seventeen years in the making between welterweight legends Nick Diaz and former champion “Ruthless” Robbie Lawler. The headline attraction will be contested in the talent-rich UFC featherweight division, pitting titleist Alexander Volkanovski against former title challenger Brian “T-City” Ortega. Alexander Volkanovski—perhaps the most underrated champion in the world of mixed martial arts today— will be looking to distance himself from his last fight, which saw him notch a narrow decision victory over former Champion Max Holloway in a bout that many observers felt Holloway deserved the nod. Ortega on the other hand responded to a brutal beatdown at the hands of Holloway in December 2018 by returning last October with an emphatic victory over moderate favorite Chan Sung Jung (the Korean Zombie). Both athletes are in the prime of their respective athletic careers, as Volkanovski is 32 and Ortega is 30. Every sign points towards this fight and this card being extremely fun and competitive.

This is a tricky fight that I am having a hard time getting a good read on, so I will share the following: there are sharp gamblers I follow convicted on both sides of this play, but more of them are siding with Volkanovski (particularly from a money line perspective) at this price point. Alexander Volkanovski was able to defeat Max Holloway twice over 50 total minutes of cage time by defeating him in a pair of competitive range kickboxing matches. Considering Max Holloway is one of the greatest strikers in the history of the sport, this speaks volumes to the ability and efficiency of Volkanovski’s striking style. Despite being much shorter than most of his opponents, Volkanovski has a freaky long reach, an extremely clever and diverse striking arsenal (i.e. combination punching, shifting counters, low kicks), and one of the highest fight IQ’s in the sport. If past is prologue, Volkanovski should be expected to win minutes standing in this fight if he is able to avoid the hurting blows of Ortega. Ortega on the other hand should be looking to land hurting blos and test the durability of Volkanovski, who has been stung and dropped by Chad Mendes and Max Holloway in recent bouts. Ortega has been making steady and significant improvements to his boxing game, landing with more power and demonstrating good vision for single-strike openings. That being said, his output and efficiency is unlikely to keep up with Volkanovski over five rounds. I believe Ortega will need to land something that hurts Alex in the clinch or on the counter. Otherwise, he would need to establish top position on a takedown (which will be very difficult to do against Alex) or snatch a front headlock or slick submission in the clinch or in transition as he has been known to do.

If you are on the Volkanovski side, I think you can afford to play his money line at -175 (~63.6%) indication and feel comfortable laying the individual money line or parlaying him with another confident favorite (i.e. Valentina Shevchenko). In terms of the prop market, there are two plays I really like on the Volkanovski side:
1) Volkanovski 4/5/DEC +100 (Covers a late finish if the tough and durable Ortega slows down or gets drowned by volume as in the Max Holloway fight. Also covers the most likely outcome, the DEC)
2) Volkanovski DEC +140 or better which is still available on a few books.

Unfortunately for Lauren Murphy, the market is giving her almost no chance to defeat incumbent champion, and arguably the baddest woman on the planet, Valentina “Bullet” Shevchenko. The market average price for a Valentina Shevchenko money line wager sits at -1529 (~93.9%) implied. Meanwhile, the return on Lauren Murphy sits at a market average of +832 (10.73%) with +980 (9.3%) the best market price, available via Fanduel Sportsbook.

The Bet: Parlay, Prop, or Pass.

Truth be told, I do not like the prop slate on this fight as much as the rest of the market. Valentina Shevchenko has alternated finish and decision wins over the course of her career but I don’t read much into that beyond the spirit and durability of her competition as well as their willingness (or lack thereof) to engage in the fight. That being said, as Valentina has an equal share of wins by submission, knockout, and decision (7 of each) the submission prop being priced at +500 on Fanduel seems like the best option from a prop perspective (KO/TKO is market avg. -115, DEC is +213 market average, and SUB has been bet down to +414 market wide. Otherwise, I locked in several plays on Valentina in parlays when she was at -1200 and below. At current price, she can still be added to parlays but she won’t add a tremendous amount of value unfortunately.