Hello Daily Fantasy Sports fans! Welcome to this week’s edition of the Weekly Rankings Update! Have you got your fill of NCAA Tournament games yet? It’s already been a day full of upsets, and in honor of that, we’re taking a look at a few of the greatest upsets in NCAA Tournament history! On to the rankings!

All of our Top 25 in the TPOY have cracked the 50 qualifying entries threshold. Not a big change with the minimum being moved back to $10,000. McJester, Troll4MVP, StlCardinals84 and PrimeTime420 have all cracked the 10k point mark. Will anyone pull off a last second, buzzer beating, Jimmy V looking for someone to hug-style upset come December? The sixth seeded NC State Wolfpack knocking off the Phi Slamma Jamma Houston Cougars in the 1983 title game takes the cake of the biggest upset in tournament history.

We’re rounding the final turn on the NBA season, and the players are settling in behind Condia for final positioning. It would take an even bigger upset than Rollie Mossamino led Villanova upsetting conference rival Georgetown in the 1985 final. The eighth seeded Wildcats shot 78.6% from the floor to beat the heavily favored Hoyas. 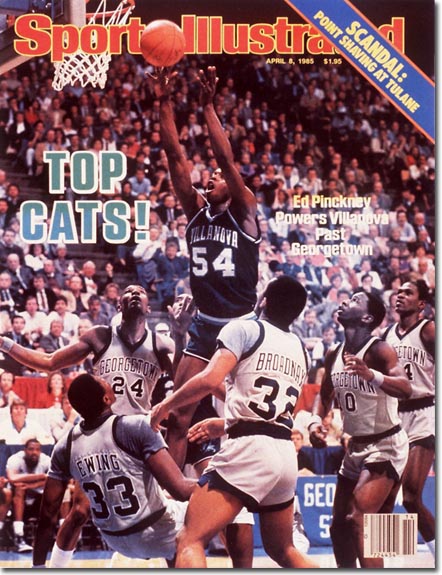 Ehanfer maintains his lead over Lowkey this week. Lowkey winning would be considered maybe a minor upset, much like Duke taking down UNLV in 1991 was technically an upset, but more of a great game played by an underdog. After having lost in the finals to UNLV the previous year by 30 points, the Blue Devils shocked the undefeated Rebels 79-77 in the semifinals. No other team has made it to that point undefeated since. This was in the finals against Kansas, but you can’t tell me it’s not one of the greatest dunks ever (yes, I am a HUGE Grant Hill mark):

Ah, the Month of Madness! Condia is leading here, but could there still be room for an upset? Maybe a Bryce Drew miracle shot in front of his head coaching father? The Valparaiso upset of Mississippi in 1998 might not have been the biggest gap in seeding, but the ending is one of those you will never forget. The Crusaders were down two with 2.5 seconds left and ran a modified hook-and-ladder play to Drew, who canned the three in one of the most memorable endings in NCAA history.

Congratulations to all those players in the top 100 of all of our rankings!

See everyone next week!