How to Balance Leagues: NBA

As you get deeper into daily fantasy basketball and start to play more games on a given night, there are several common questions that come up. Most of them center around a general concept of balance. Whether it be balancing play among different sites, game types, or rosters, there’s always tweaking and editing that needs to be done to find an optimal mix.

QUESTION #1 – How do I balance leagues on different sites?

This is actually one of the harder concepts to master in all of daily fantasy sports. Some sites are sharper with their pricing than others. Some sites have strict positional eligibility. Some sites offer utility roster spots.

There are also scoring differences among almost every site. This is not an easy thing to master. My initial advice would be to take it slow and find one or two sites with which you are comfortable. Get to know these sites inside and out: salary structure, scoring format, and so on. Not until you have mastered that site should you go on to try another one. A big mistake a lot of players make is immediately starting to play on four or five different sites. That’s too much right out of the gate.
Once you find a couple sites you like, make sure you don’t blindly pick the same players on all of the sites.

A guy that’s a bargain at 10 percent of the cap on one site might be 20 percent of the cap on another site. You have to optimize based on positional and salary constraints. Again, it’s not a thing that’s easily mastered and it’s one of those things that just comes with time and practice. Use the free games to your advantage when you are starting out on a site.

QUESTION #2 – How do I balance leagues of different game types?

Another common question is balancing head-to-head games or double-up games with others such as three-man, five-man, or tournament-style games. This goes hand-in-hand with the issue of multiple rosters.

In my opinion, the ideal mix is about 80 percent head-to-head or double-up games, 10 percent three or five-man games, and 10 percent tournaments or GPPs. Having a heavy mix of safer games, which can now also include the growing “matrix” style games, will help the consistency of your bankroll.

I know the tendency for the casual player is to just try to hit a large prize pool, but if you’re in this for the long haul and are looking to make a consistent profit over time, having a large dose of safer games is paramount.

QUESTION #3 – How do I balance multiple rosters?

The answer to these questions is not easy, and it very much depends on the player. When I am running hot, I will generally just run out one lineup for everything because I feel like I am in a good place mentally and rolling with my optimal picks. 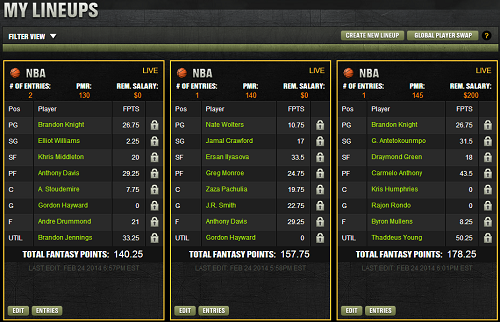 However, when I am running cold, I doubt myself a little more and sometimes talk myself out of what could be good plays. In times like those, I will hedge a little more and use three rosters per night. That’s my general rule for NBA.

I also use those same teams for tournament play. The only time I would consider different rosters is if I have a “super risky” lineup that I will only enter in tournament games.

As far as playing “too many” rosters, multiple rosters are easier to balance on some sites than others. Also, there is a point where you’re just playing too many guys and you limit your own upside. Find a balance that works for you.

Good luck in all your games, and thanks for reading!