Q&A With theWhistlesGoWooo, RotoGrinders 2021 Tournament Player of the Year 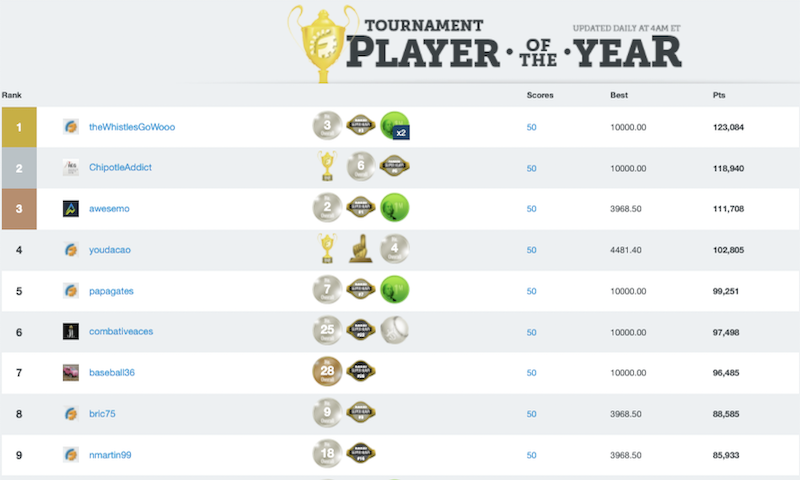 David Bergman, better known as theWhistlesGoWooo, is your 2021 Tournament Player of the Year! Bergman knocked off defending champion and three-time TPOY Tom Crowley (ChipotleAddict) to claim 2021’s top spot, and it took a late surge to do so. Bergman’s ascendence as one of the top DFS players in the world has happened rather quickly. We caught up with RG’s newest TPOY (currently No. 3 overall) to find about more about the man behind the whistles and his recent success.

RotoGrinders: First off, congrats on winning 2021 Tournament Player of the Year!

Thank you! It’s humbling if anything else. And I’m so happy you guys do this. I just started taking DFS a bit more seriously about a year and a half ago. I love that it gives the top player recognition and something to aim for.

You said you just started taking DFS more seriously. When did you first start playing?

I started dabbling during the football season in 2018. At that point it was just for fun. And then in 2019, I started doing a little more, especially during baseball season, but still not much. I cranked it up more when football kicked off that year, but it was still casual. Then during Covid I said, you know, I’ve got more time on my hands, let’s see if I can improve the models, and that’s when I got serious about it.

What was your first big cash?

So the 2020 football season was really good to me. I hit a couple of showdowns with $100K at the top and I also hit an afternoon-only slate for $200K with Dak Prescott. Those really gave me the bankroll to start buying into the qualifiers, which eventually led to the FFWC win.

So you said you had a little more time to focus on DFS because of Covid. What were you doing before?

I was and still am a professor at UCONN. I also do a bunch of consulting work on the side.

What do you teach?

I teach analytics. We have a really great Masters of Business Analytics and Project Management program, which was one of the first masters programs in analytics. So I teach predominantly stats and databases, and other analytics-related courses.

There have been some DFS legends who became sports fans because of their math acumen. What came first for you, sports or math?

What got me into DFS was that I’m both an analytics and a sports fan. A lot of my students come to me and ask what they should go into and what’s the hottest area of analytics. I just say to them “do what you love because it’s the only way you’re going to succeed.” Analytics without any kind of domain knowledge or care, well, you’ll never be successful at it. You have to really be someone who enjoys where you’re applying the analytics. So I think why it’s given me a little more of an edge maybe is because it’s something I love. I love watching sports every single day, which is of course what I do. And then I get to couple it with the professional skillset and ambitions I have.

Speaking of love for sports, who is your favorite NFL team?

You might be surprised to hear it’s the Vikings, actually. Neither of my parents are from the U.S., so growing up we didn’t have any kind of football fandom in the house. But my best friend, his family were huge Vikings fans, so I just kind of became a fan through them.

Back to DFS. You’ve had a lot of success throughout the different sports. What is your favorite sport to sweat?

Oh, golf when there’s a cut, no doubt. You get two sweats per contest starting Friday and then again on Sunday if you’re lucky enough have some good lineups. It’s awesome.

What’s a week in the life of Whistles during the NFL season?

For NFL you really have to make sure your lineup is sound, which takes time. With other sports, like NBA and MLB, there’s always tomorrow.

So, normally by Thursday or Friday, I start to run initial models, look at injury reports, and just start to understand the moving parts of the slate overall. On Saturday I compare what I’m picking to what other projection sites are saying, and then I start to adjust things. By Saturday night I have a good idea of what my lineups are going to look like. Of course on Sunday there is breaking news, so I stay busy finalizing things from 11 to 1 — bringing guys in, double-checking and triple-checking everything.

What do you think your biggest edge is?

It’s not the projections. It’s more so the game theory and ultimate assembly of lineups. You know, figuring out who people are going to pick and adjusting based on that. Also just thinking about how to assemble my lineups based on the players I want to force in.

It was. I saw sometime in, like, November that I was catching up. Before that, I was predominately a DraftKings player, but I thought if I could couple it a little with FanDuel and get more action down then maybe I could get into 1st place. Part of that motivation is because I want to create an online course in DFS analytics, and I think getting TPOY gives me more recognition within the community. That’s also why I think what RG does with these rankings is so awesome. It provides the top players the opportunity to compete even more so and ultimately distinguish them from the field. Aside from just winning money on the sites, the RG rankings are fun to watch and monitor throughout the year.

So you said you have DFS analytics course in mind. With your background as a professor, do you think, even down to the high school level, that schools and teachers can better incorporate sports into their curriculum to get kids more interested in and learn math?

There is no doubt that that’s true, and that’s what I try to do in my classes. And another thing that I try to tell all of my students, even in my Masters of Business Analytics classes where all the students are at least somewhat mathematically inclined, I tell them that they have to be honest with themselves about what their skill set is. Then go from there in finding an edge. So now apply that thinking to DFS: If you think your knowledge of sports is the thing that can help you out the most, then that’s the thing you should concentrate on but also learn at least enough of the math in order to succeed. Now on the other hand, suppose you know you’re a really mathematically inclined person: focus on what kind of analytical tools you can build for yourself and go from there. Everyone in DFS falls somewhere on that spectrum between analytics and more general sports knowledge. You as a player have to be honest with yourself as to where you fit best in that spectrum.

What do your family and friends think of your success?

I think everyone is a little shocked by the whole thing but also enjoying and having fun with it. However, some of my friends just kicked me out of my season-long fantasy league because I was spending too much time on DFS and started some players who were inactive. Shout out to the Vodka Boys, though, it’s an excellent league. My time has passed but I’ll be watching from the sideline.

Congrats again to Whistles, and good luck at DraftKings’ Fantasy Tournament of Champions! For more information about our Tournament Player of the Year rankings, read the RotoGrinders TPOY FAQ.