Every NBA DFS player has said it or thought it: “If I stack this game and it goes into Overtime, I will make all the money.” And more often than not, the game does not go into Overtime (OT). That led me to ask the following questions:

1. How often does NBA OT actually happen?
2. How many more points are scored in OT games?

Each season, there are 1,230 NBA games played. I expected the number of OT games to vary widely by season, as OT feels like something you can’t predict. However, if you take a look at the chart below, OT has occurred between 6.2% to 6.4% of NBA games each of the past 3 seasons. In other words, when you stack a game and hope for OT, you’re really hoping for an event that happens about 6.3% of the time.

How many more points are scored in OT games?

So to summarize, we tend to see OT happen around 6% of the time, allowing the game to have about 20 more total points. That’s a huge advantage for DFS players if you’re lucky enough to have stacked an OT game.

Feel free to reach out to me on Twitter (@ AllanLemDFS) or leave me a Comment below with any thoughts. I hope this was helpful. Thanks for reading. 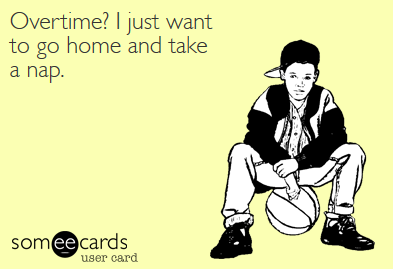