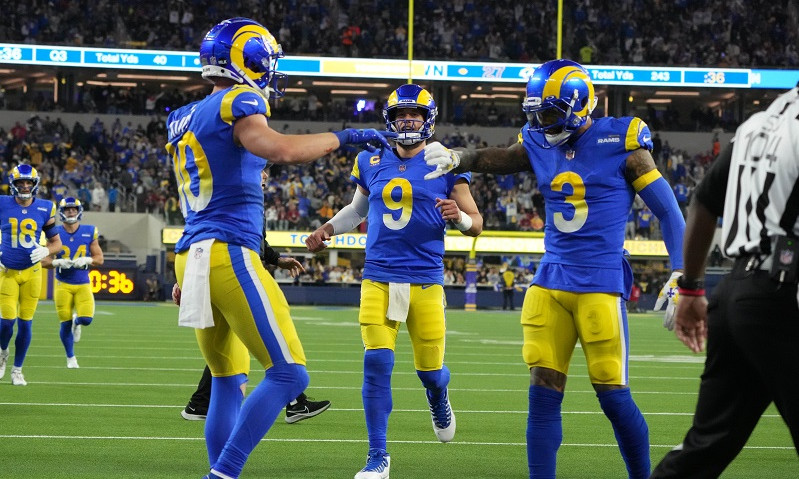 What kind of performances can prop bettors expect from Cooper Kupp, Matthew Stafford, and Tom Brady on Sunday? Follow along as NFL betting analyst Nick Galaida breaks down his four favorite Rams vs. Buccaneers player props. Not in a state with legal sports betting? Sign up at PrizePicks and Underdog Fantasy to start winning cash on NFL player props tonight!

On Sunday afternoon, the Los Angeles Rams and the Tampa Bay Buccaneers will face-off at Raymond James Stadium for a chance to host the NFC Championship Game. When these two teams met in Week 3, the Rams dominated from the opening kickoff–emerging victorious by a final score of 34-24 in a game that was not even that close. Though this is technically a rematch, both of these rosters will look completely different on Sunday compared to how they looked in September. Oddsmakers are anticipating a tightly-contested affair in this one–pricing the Buccaneers as 3-point home favorites on the spread.

As we approach kickoff, the value on the spread and the total has been reduced compared to its opening market price. Instead of forcing action on saturated markets, bettors may find more expected value on player props for this postseason affair.

When these two teams met in September, Cooper Kupp had 9 receptions, 96 receiving yards, and found the endzone twice. He had 12 targets, which was double that of the next most frequently targeted Rams receiver. On Sunday, Kupp has the most favorable matchup of any member of the Los Angeles receiving corps. He will see the vast majority of his snaps against Sean Murphy-Bunting, who is a liability in coverage. Quez Watkins burned Murphy-Bunting over and over again last weekend. Expect Kupp to do the same, and for Stafford to connect with him often in this one.

We are doubling-down on a big game from Cooper Kupp in this one. Per EdgHouse, Kupp eclipsed this number in 11-of-17 games played during the regular season. Following a somewhat quiet performance during the Wild Card round, Kupp is poised to have a massive performance in an extremely favorable matchup. Both of his main competitions for targets, “(player-popup #odell-beckham)Odell Beckham Jr and Van Jefferson, have much more difficult matchups on Sunday. Kupp is likely to shine in the Rams’ most important game of the season.

In Week 3, Matthew Stafford completed 27-of-38 pass attempts for 343 yards, four touchdowns and no interceptions in a winning effort against the Buccaneers. During the regular season, Stafford threw for three touchdowns or more in a single game on eight occasions. Tampa Bay’s secondary has been much-improved in recent weeks, but this is still a unit that is vulnerable in zone coverage, and especially vulnerable against an elite collection of receivers for the Rams. Stafford was masterful against the Buccaneers earlier this season. We anticipate another strong performance from him this time around. At significant plus-money, this play is worth a small wager.

Tom Brady is arguably still the best quarterback in the NFL, despite his advanced age. Nonetheless, Brady is only responsible for throwing the football. During the regular season, nearly half of Brady’s interceptions were the result of a tipped ball by the defense or one of his receivers. Being without Chris Godwin and Antonio Brown, Brady will be forced to throw to young receivers, who lack significant playoff experience. Brady might not need to make a bad throw for this prop to cash on Sunday.