We’ve got another big Wednesday slate of 12 games, so it’s time to find some of the more off-the-board picks. Today doesn’t seem to have a ton of hidden value so far, and this could be a day where not many players are very heavily owned in tournaments.

At this point in the season, so many teams are holding players out, and that will likely happen again today. Not much of that news has hit as of me writing this, but today I’ll go over another strategy to use in order to be contrarian.

With so many teams missing starters these days, we’re able to extract some excellent value from the remaining players. These players who see a bump in value tend to become the “chalk” picks that many DFS players will build lineups around. However, you’ll also need to sprinkle in some players that others won’t be targeting as much in order to get ahead.

One way to do that is to take players from teams that are at or close to full-strength. Often times, these players will have prices that look a bit high, but they’re still capable of going off. A good way of checking if the player is priced too high is simply to multiply his price by six (for FanDuel) and then ask yourself if he’s capable of hitting that amount or more. Example: Pau Gasol costs 8.9K, meaning he’d need 53.4 FD points in order to be a great tournament value. Even with the frontcourt back intact, he’s capable of that, so he’s worth playing in tournament lineups in my opinion. This type of price check can be a good way to determine if a player on a healthy team is worth using, and sometimes these players will turn out to be low-owned.

Payton has continued to fill up the box scores lately, but he draws a tough matchup against the Spurs in a game that has blowout potential. This, coupled with players like George Hill and Jordan Clarkson being priced lower, should keep Payton’s ownership percentage below where it’s been lately. 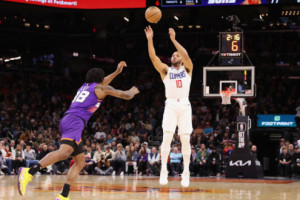 Over the past three games, Gordon has been pretty brutal. Still, he’s in position to get plenty of shots up against a poor defense and will have the opportunity for big minutes. This could be the spot where he puts up a big game, and the price has come down to a very reasonable level.

Tough to trust Middleton these days with his production decreasing and his price staying a bit higher than we’d like to see. Still, he has big tournament upside since he can put up a big line any time. The potential matchup against Jimmy Butler makes him a bit of a sketchy play, but will also depress his ownership level even more. I wouldn’t build my lineups around him, but he’ll probably find his way into a lineup or two.

Ghostface Ilya might be practically unplayable at that price on DK, but he can still hit value if he puts up one of his big games. I love him for tournaments because he’s so volatile. Another player not to build lineups around, but one who can win you a tournament when he goes off. He may not be especially low-owned on FanDuel, but will be very contrarian on DraftKings if you dare pay that price. 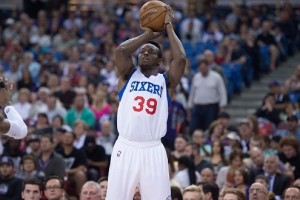 News just came out that Grant would draw the start today. That doesn’t in any way guarantee that he’ll produce, but it does give him much higher upside. He can rack up the steals and blocks occasionally, hit some threes, or do nothing at all. Many who’ve rolled with him before have been burned, and that could easily happen again, but he’s worth a look as a cheap option who could exceed value.

If he plays… which actually seems somewhat unlikely. If, somehow we get news that Cousins is playing, and especially if it’s close to lineup lock, he’ll be very low-owned on FanDuel. He would be an elite option with Rudy Gay out, but at the moment it does seem like Cousins will sit.

Vuc should be low-owned due to the tough matchup, much like his teammates, but if Orlando can keep this one close he’ll likely be a big reason why. He’s been putting up average games lately, so another breakout could come at any time. This would be a great time for it to happen, especially if not many people are taking him.