Today I’ll be going over a different strategy that can be used in order to be contrarian. Given today’s massive 13-game slate, the abundance of high-end plays, low-cost value, and medium-salary plays, you may not need to go out of your way to try picking low-owned players.

With plenty of options already, and likely more value being uncovered throughout the day as news hits, I expect there to be lots of quality players under 10% owned. Here’s a way for you to potentially build some lineups that look different from the masses.

Many of us use the Vegas odds in order to start our projections with a point total for each team. Although Vegas gets it right quite a bit, sometimes they are way off, and at times they’re predictably off. When I project team point totals, I like to use my own analysis based on how I think the game will go, then average those point totals with what Vegas says. Sometimes that doesn’t change things much, but for certain games I end up targeting a lot of players in spots where others are off them completely. Try thinking for yourself on the team point totals if you typically just use the Vegas odds and see if that gets you straying from the conventional picks a little more. One of the very best ways to be contrarian is simply to target a player whom you think will play better than others think he will. When you’re right, it can pay off bigtime.

Again, I don’t think going out of your way to be contrarian is necessary on a night like tonight, but there are definitely plenty of players who will be low-owned and have tournament-winning upside. On FanDuel, chances are you’ll need a score of 400+ to take down a major GPP tonight, so you’ll need some players who can hit 7x value on your team. Here are some with that kind of potential… of course the reason they’ll be low-owned is that they could also easily just hit 4x value, so rostering them is a calculated risk. 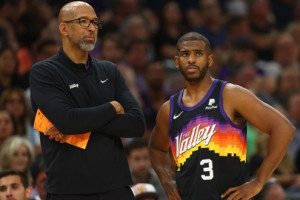 Paul has been amazing in his past three games. The problem is, his price reflects that, and there’s definite blowout potential in this game. If, however, the Knicks can keep the game close, Paul could go off again. Remember that New York beat the Spurs in overtime not too long ago. If this game becomes a shootout, Paul would be a major beneficiary.

D-Will hasn’t been his old self for most of the year, but he does show flashes occasionally. The assists still tend to be there, but his shot has not been falling with any sort of regularity. That said, if you can manage to get him on a night where he’s on, he’s still got 40+ fantasy point upside and will not be highly owned. A matchup against Mo Williams and Kemba Walker shouldn’t seem too scary, as this combo should keep the pace of the game higher than Charlotte’s early-season roster did.

It’s difficult to trust the Denver Nuggets this time of year with all the rest they’re giving to players, but if Foye plays and others sit, he’ll have a good opportunity to get heavy usage. Keep an eye out for player news to see if any backcourt members of the Nuggets will be resting today. Since news on Foye could come late, he shouldn’t be as highly owned as guys like Lou Williams, Dion Waiters, and Kyle Korver around the same price point.

The Lakers are in full-blown tank mode, but they do tend to keep games close enough for all starters to play through the fourth quarter. Minnesota will again be without much of their roster, leaving Wiggins as the primary scorer. While he is pretty scoring dependent, this matchup is one where he could very well put up 30 real-life points and 40+ fantasy points. The masses may shy away because of his inconsistent recent production, but that’s also what makes him a good tournament play. 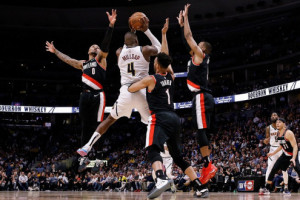 Millsap’s price has crept up again recently, and the Hawks may be at full strength, so he doesn’t jump out anymore as a very appealing play. Still, he faces a generous Orlando Magic defense, and he puts up fantasy points in a variety of categories. Should we get news that Atlanta will rest players, Millsap may then become either very highly-owned or a scratch… so keep that in mind.

On a big slate, Valanciunas is almost always very low-owned. His production can be difficult to predict, but he does put up 40+ fantasy point games here and there, and it’s almost always at a price of $6K or less. I’ve seen him on a few lineups that have won big tournaments this season. I try to take him in at least one lineup any day where I’m doing lots of lineups (20+). He’ll remain low-owned because there are lots of good center options, and plenty of people who will enter just one or two lineups. Jonas has upside, but not many people would be comfortable having him at center in their only lineup of the night.

I’ve been close to rostering Splitter for a while, but just haven’t pulled the trigger. He’s been hot of late, but his salary looks a lot better on DK right now. With so much good value at center, it’s tough to get him into a FD lineup, but with DK he doesn’t have to be the only center on your roster, so hopefully I’ll work him into at least one lineup today. You may want to give him a shot if you’re stacking the OKC/SA game.