FanDuel NBA Strategy - How To Win At Daily Fantasy Basketball

Known as the premier daily fantasy sports destination for heads-up and 50/50 leagues, FanDuel is a great choice for your daily fantasy basketball action. This Fanduel NBA Strategy Guide will help you learn the best practices for winning at FanDuel.

NOTE: This article is intended for novice daily fantasy basketball players. If you’re more experienced, check out the resources listed at the bottom of this content.

There’s a ton of strategy that goes into playing daily fantasy basketball, and it’s also the most predictable sport on a night-by-night basis. Certain players have very high floors—it’s rare to see Carmelo Anthony score fewer than 15 points, for example—and that type of game lends itself well to safer league types.

Because of that dynamic, many daily fantasy basketball players place a high percentage of their bankroll into FanDuel. Not only is there a huge selection of games, but you can also hand-pick your opponents, helping to increase your win percentage. The first step to dominance is understanding the NBA basics covered in this guide to master FanDuel basketball strategy.

Thre are a number of game modes to play on FanDuel, including 50/50s, Multipliers, Tournaments, Leagues, Head-to-Heads and Beat the Score.

Once you’ve chosen your game mode, the next step is picking your FanDuel lineup. The FanDuel salary cap is $60,000. Player salaries range from $3,500 to $11,000+, and you must select a 9-man lineup made up of two players per position except for center (only one required).

Here are some thoughts for you to consider when picking your lineups:

FanDuel requires you to start two point guards, two shooting guards, two small forwards, two power forwards, and one center. The starters fall into very rigid categories, unlike on the other major daily fantasy sites. That’s a characteristic of FanDuel in all sports.

Just as they have no flex position in football, FanDuel has no utility spots in basketball. You must start two point guards and two shooting guards, for example, as opposed to one point guard, one shooting guard, and two guards at either position of your choosing.

With no utility, you don’t really need to compare players at separate positions. The utility position in daily fantasy basketball is much different from the flex spot in football because NBA players score points in the same ways (as opposed to quarterbacks versus running backs), but the lack of a utility position will still cut down on your research time. You don’t need to figure out if centers are inherently more valuable than point guards, for example, because you need to start a fixed number at both positions.

Also note that requiring two starters at very specific positions means you’ll typically find yourself “digging deeper” for quality options. On a night when there aren’t a lot of quality point guard options, for example, you could potentially start more players at other positions on other sites. That’s not a possibility on FanDuel. It’s not necessarily a negative—it could reward player knowledge, actually—but it’s something you need to think about. It’s more likely that you’ll use a “stars and scrubs” roster construction approach, combining elite players with bargain big players, on FanDuel than anywhere else.

The points themselves are less important than how they compare to one another. If FanDuel gave two points for rebounds but five points for assists, rebounds would actually lose value, relative to assists, even though they’d give you more points.

To give you an idea of how FanDuel’s NBA scoring differs from the norm, let’s compare their scoring to that of two other daily fantasy sites.

All three sites give one point for a point scored, 1.5 points for an assist, and two points for steals and blocks. FanDuel gives 1.2 points per rebound, which is just slightly less than the 1.25 awarded by the other two leading sites.

The main differences here come in three-pointers, turnovers, and missed shots. FanDuel does not give extra points for three-pointers, so all buckets are treated the same (besides the obvious fact that three-pointers are naturally worth more). Thus, when you’re analyzing scorers, you should worry solely about pure points scored and not so much about how players score their points.

FanDuel also takes away a full point per turnover. Turnovers are relatively random and difficult to predict each night, but you’ll still want to avoid players who are careless with the ball to a great extent.

Finally, note that FanDuel doesn’t penalize for missed shots. That means you can concentrate on finding high-volume players, regardless of their efficiency. Carmelo Anthony has a whole lot more value on FanDuel, for example, because all you need to worry about is bulk points. If a player takes a lot of shots, that’s a positive; it doesn’t matter how many he misses. 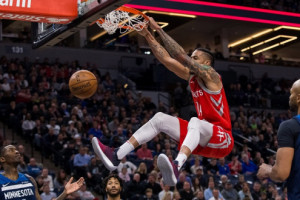 Since daily fantasy basketball is a nightly sport, the majority of your action will likely be head-to-heads, much of which can be played at FanDuel. In RotoAcademy, we have more advanced information on what wins in head-to-head and 50/50 leagues. Long story short, you want to pay for consistency, which probably involves a process a little bit different than what you might imagine.

Because basketball is such a consistent sport, nightly projections are probably more meaningful in the NBA than any other league. Whereas you can project a hitter to go 2-for-5 but he doesn’t even get on base, you’re highly unlikely to miss by so much on basketball players.

One of the easiest ways to project NBA players is by looking at minutes. There’s a very strong correlation between minutes on the floor and fantasy points. That’s useful information for starters, but it’s particularly advantageous when selecting backups who are thrust into the starting lineup. One of the easiest ways to secure value in daily fantasy basketball is to identify players who are set to see a dramatic spike in minutes, such as when a starter gets injured or is a late scratch.

When searching for bargain bin NBA players, you want to get the most production possible for the cheapest price. Knowing how a site prices backups is important; as we mention in RotoAcademy, you should be searching for a specific baseline of points for different types of players on FanDuel.

Based on how FanDuel typically prices their players, you normally want 5x a player’s salary for most guys. That means if a particular player costs $6,000, he should score in the neighborhood of 30 points to be considered of value. Elite players really only need to hit 4x their salary to be valuable, while bargain bin players should be closer to 6X.

If you’re considering a high-priced power forward who costs $10,000 on FanDuel, for example, he’s valuable if you have him projected anywhere around 40 points (4x salary) or more. A backup who costs only $4,000, however, should be expected to score 24 points (6x salary) if you want him in your lineup.

We hope this was a helpful introduction to daily fantasy NBA on FanDuel. To continue to sharpen your game, we’d encourage you to check out the following:

— Fanduel NBA Daily Research Tools – Your one-stop source for projections, stats and picks each day, as well as our famous Lineup Builder
— The Main Forum – A great place to talk NBA strategy and ask questions.
— GrindersLive and Podcasts – We’ve got lots of great, daily media for those of you that don’t like to read!
— RotoAcademy – Both paid and free strategy courses from some of the sharpest minds in the industry.