In case you have missed the first nine articles, FanDuel is running a contest between nine of the top fantasy content sites to see who is able to put together the best lineups over the course of five weeks. For complete details of the contest, visit the FanDuel Partners Basketball Championship homepage.

Ladies and gentlemen, we are down to the final night of the contest. Team RG currently holds a very slim 9-point lead over RotoWire. It has been a fun contest so far and hopefully we can bring home the hardware. If we were playing from behind, this would be a good time to employ more of a GPP-approach. However, since we are playing with a lead, there is no point in changing our strategy up now.

Here is RG’s lineup for the FPBC tonight: 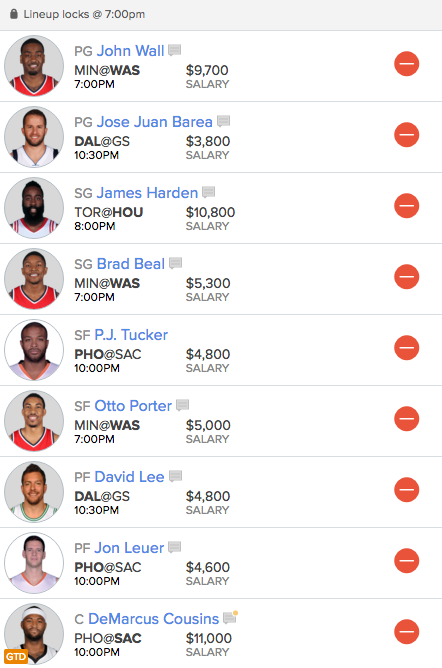 As usual, here is a breakdown of my favorite pick at each position:

J.J. Barea: $3,800 – The Mavericks waived the white flag before tonight’s game even began. They need a strong finish to make the playoffs and Rick Carlisle figured that they weren’t going to get tonight’s game against the Warriors anyway. With Devin Harris, Deron Williams, Dirk Nowitzki, and Chandler Parsons out, Barea became an excellent value play. He should end up being the chalk play at the position.

James Harden: $10,800 – Harden has been on fire recently and with the Rockets fighting for their playoff lives, he has been playing 40+ minutes seemingly every night. Even though his matchup against the Raptors is less than ideal, the Rockets are playing at home. The total for this game is high and Harden should get close to 20 shot attempts.

Otto Porter: $5,000 – Porter’s minutes, usage, and production are all up over his last five games. With the Wizards fighting for the playoffs, they have tightened their rotation, which is good news for Porter. He should see minutes in the low-30s tonight against the Wolves in what is expected to be a close, fast-paced game. Small forward was an awfully thin position and Porter stuck out at only $5,000.

Jon Leuer: $4,600 – Leuer is coming off of a huge game against the Lakers the other night. With Tyson Chandler ruled out, he is expected to draw another start tonight against the Kings. In terms of matchups, he has the best possible one that a power forward could have. The Kings are ranked dead last in fantasy points allowed to the position this season.

DeMarcus Cousins: $11,000 – Cousins is currently listed as probable. While that makes me a little nervous, he was by far my favorite target at center tonight. With Tyson Chandler out, he should be able to dominate the paint on both ends of the floor. Cousins has also shown an extremely high floor, scoring at least 45 fantasy points in each of his last ten games.