Game Stacks Are A Massive Edge in NFL DFS

In two previous articles, we covered both the popularity and effectiveness of stacking with your QB in NFL DFS. While stacking has certainly gotten more popular in recent years, you can check out those pieces here and here to see some interesting ways in which you can still find pretty significant edges in how you build your stacks for GPPs.

One stacking technique that still seems to fly a bit under the radar, however, is game stacking. A game stack is a lineup where you have a team stack (e.g. QB + at least 1 pass catcher from his team) plus at least one player from the opposing team. Most players are at least aware of what game stacking is, but is the field utilizing this roster construction enough? And does it provide an edge on the field? 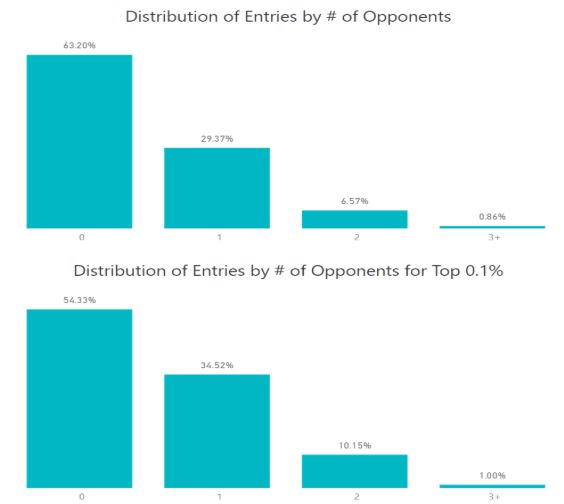 The top chart here is the distribution of the 23 million lineups that used a team stack (e.g. QB + at least one pass catcher teammate) grouped by the number of opposing players used in that same lineup. So, an example would be if Kansas City is playing New England, and you stack Patrick Mahomes with Tyreek Hill, and also play Julian Edelman in that same lineup (this is also what we like to call ‘running it back’ with Edelman). This example lineup would fall into the bucket 1 above. About 36% of all stacks had at least one opponent also in the lineup. That’s a decent amount of all lineups, so the question is, is this number too low?

Despite making up 63% of all lineups, the 0 opponent lineups only made up 54% of lineups that landed in the top 0.1%. Not only that, but all three opponents stack buckets see an increase in their percentage of top lineups. Just at a high level, the majority of lineups are not game stacking, but a pretty significantly greater percentage of the top lineups are game stacking.

Below is a break out of all game stack combinations that include a core stack of 2-4 players and an opponent stack of 1-2. D/ST is not included in the opponent stack numbers, and of course, it is not possible to stack using the opposing QB. This covers almost all of the lineups using a game stack and anything outside of these limits are extremely rare, go-for-broke lineups that we don’t want to cover here. You will see each game stack type described by the number of players from the core stack, including the QB, plus (+) the number of opponents. So if I were to roster Patrick Mahomes, Tyreek Hill, and Travis Kelce, while also rostering one opposing WR this would be defined as a 3+1.

How Are Game Stacks Used? 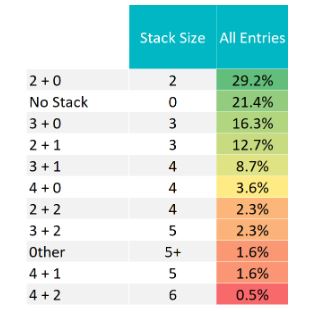 Interestingly, a stack combination that includes an opponent does not show up until 2+1, which comes in fourth-highest at 12.7%. Game stacks of 3+1 come in slightly below that at 8.7%, but these two are the only game stacks with an opponent that make up more than 3% of all lineups. As you can see, not many people are stacking two opponents with their core stacks or pairing any opponents with a core stack of 4. We can now look at the top 0.1% of lineups to find what game stack types provide us the most leverage. 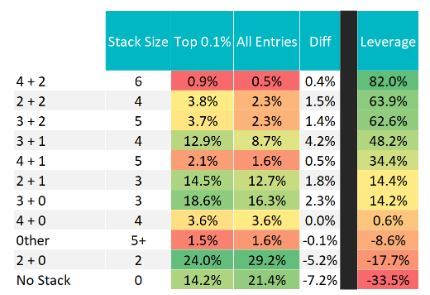 You can see here that every variation of a game stack provided positive leverage on the field, and they all provided greater leverage on the field than any non-game stacks. The leverage on full-blown game stacks like 4+2, 2+2 and 3+2 is massive, but since they make up a fairly small percentage of top lineups, I wouldn’t go all-in on these stacks as your core lineup build. However, having exposure to these types of builds, particularly in larger field contests, can give you very unique lineup construction with massive upside and leverage.

In general, the key takeaway here is that no matter how you decide to build your game stacks, as long as you’re utilizing them in some shape or form, it puts you in a very advantageous position against your opponents.

These results are a game changer for me. Whereas before I thought that game stacks were something to be used sparingly, these numbers suggest these should be the core of our GPP strategy. While we are at some degree approaching the equilibrium for simple QB stacking, game stacks seem to be an untapped source of leverage that we can deploy for a profit. While we are on the topic of profit, let’s take a look at what all of this means to the bottom line. 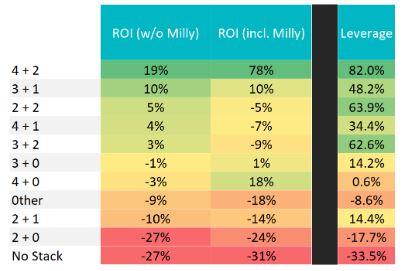 Clearly the 4+2 (and even 3+1) stacks enjoyed massive success in the Milly (keep in mind the small sample size and payout structure concerns with the Milly), but look at the ROI of all those game stacks in the non-Milly Maker GPPs. Again, the key takeaway here isn’t even about any one specific roster build, but just by utilizing game stacks in general, your ROI expectation shoots through the roof.

Across three different articles, we’ve now taken a look at the massive benefits of stacking in general, team stacking and game stacking. Even as stacking has gotten more popular in NFL DFS, there are still very distinct advantages to be gained by how you utilize stacks in your roster construction, particularly with game stacking. With that being said, another critical part of roster construction is in building your lineups appropriately for the types of contests you enter, whether that be the Milly Maker, Single Entry contests, small fields, live final qualifiers, etc. So, in the next part(s) of this series, we’ll take a look at how all these different stacking metrics line up with different types of contests on DraftKings. Be on the lookout for that soon!

As always, huge shoutout to Brennan (xBigtymerBx here on RG, @TheDFSAdvisor on twitter), the data analyst making all this possible with these articles. The guy is just crushing it. Make sure to give him a follow, and feel free to drop any questions or feedback here into the comments or on Twitter.