Is GPP Success All About Seeking Upside? 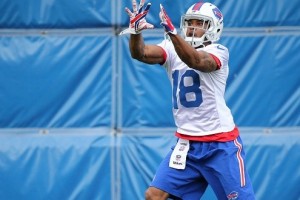 There’s little doubt that a high-variance approach is generally the preferred method for daily fantasy sports players in tournaments, and for good reason; only elite lineups win GPPs, so it makes sense to try to maximize your lineup’s ceiling.

But how much should we really be seeking upside? Should we take on as much risk as possible, at all costs? Does it ever make sense to roster a safe, high-floor player, even if we know he doesn’t have a really high ceiling?

I’m not sure there are definite answers to these questions, but I still believe we need to need think critically about this issue because it could have a really meaningful impact on how we construct tournament lineups.

We all know how valuable it is to hit on the top-scoring player in a given week. If you can identify and roster the receiver who goes for 220 yards or the running back who makes his way into the end zone three times, it can turn an otherwise decent lineup into an elite one.

But just as important is not missing on any players; rarely do we see a winning GPP lineup with a very obvious miss, i.e. someone who doesn’t even come close to returning value.

Looking at DraftKings NFL results from last season, here’s the average high- and low-scoring players on lineups that won both head-to-head and GPP lineups.

The typical GPP winner saw the top player score 38.3 points, compared to 33.2 points for winning head-to-head teams. That gap of 5.1 points is significant, but not all that surprising.

This doesn’t necessarily suggest that we should stop taking high-variance players with every pick, but it is definitely interesting that the typical winning GPP lineup requires consistency across every position.

The Probability of Hitting on Every Pick

The chances of seeing significant value out of every selection, winning GPP lineup or not, are extremely small. Those odds diminish significantly if we roster super high-variance players with really high ceilings, but also a very high probability of giving you next-to-nothing.

Suppose we’re deciding between two player trios, and we estimate the odds of each of them reaching a certain level of production as follows:

Which one is the better option? Well, the odds of all three players in the first group reaching their ceiling is 1.6 percent, while the probability of the second trio doing it is 2.7 percent. The second group is clearly better in terms of probability, despite not having either of the top two players. In this way, you can see that rostering a few truly high-variance players with really low floors can potentially be quite detrimental in a GPP.

The other thing to consider is that floor production is more predictable than ceiling production. We don’t really have a great grasp on when Calvin Johnson will completely light it up—there are signs, such as the matchup, but those truly elite games are more or less fluky—though we can predict with a decent level of accuracy when he’s more or less likely to provide a consistent stream of points.

Thus, even though the effect on raising a player’s floor is less significant than hitting on a high-variance player when he goes off, we can do it more often and with more consistency, so the total effect could be comparable.

Again, I still think we should generally be seeking volatility in tournaments, but perhaps not to as great of a degree as some believe. Specifically, it might make sense to generally target upside in tournaments, but not at the cost of taking on a really low floor. If you can manage to increase your lineup’s ceiling without stepping on any of those landmines that can really hurt your GPP efforts, you should find a lot more future tournament success.