Short slates like the four-game set this weekend means less decisions for owners. The player pool is 25 percent of normal, there are 12 less matchups to analyze, and the four matchups in play have been scrutinized to no end. Our advantage over our opponents is in extrapolating an edge over each decision, so the more the merrier. The point is that no matter what the results are this weekend, we can be sure that our expectation has been reduced significantly. I’ll only be playing about 30 percent of my normal NFL Sunday volume.

That said, we can still have fun and try to make some money doing it. There are always inefficiencies to exploit in both pricing and ownership. All comments below refer to FanDuel pricing. The point of this column is to use the news, snap counts, usage and trends to both be a little contrarian and avoid whiffs.

It’s often tricky to project ownership, but I think Jeremy Hill will be the highest-owned running back in FanDuel GPPs. I suspect only Antonio Brown will have a higher ownership percentage at any position. Fading Hill makes me queasy, as he’s a guy I’ve been riding for weeks now and one who is grossly underpriced at $7400. But this Colts defense has at least shown a smidge of ability to rise up against the run recently, holding DeMarco Murray to 22-58-1 in Week 16, Arian Foster to 26-99-0 in Week 15, Terrance West/Isaiah Crowell to a combined 29-108-1 in Week 14 and Alfred Morris to 17-67-0 in Week 13. On top of that, we should have some game flow concerns as Gio Bernard is the clear-cut passing back. Gio is averaging 13.6 touches per game over the last three weeks vs. 24.3 for Hill. However, Bernard has 15 catches during that span vs. three for Hill. If the Colts (favored by 3.5) can get a lead against the annually playoff-choking Bengals, it would be trouble for Hill. I’ll still have some of him in cash games, but there’s merit to trying to knock out 40 percent of a GPP field by avoiding him. 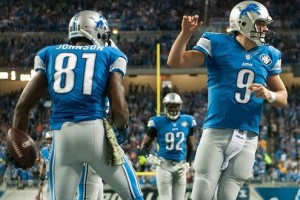 It’s going to be difficult to really make a contrarian stack in a four-game slate as just about every square will be covered. We know that Matthew Stafford and Calvin Johnson are an excellent GPP pairing every week, but it’s especially appealing this week given that the Lions are 6.5-point underdogs and the Cowboys trot out inept Brandon Carr/Sterling Moore at corner. A way to make this stack contrarian is to add in Reggie Bush, who finally appeared over his ankle injury in Weeks 16 and 17. Bush has positive correlation with Stafford because he’s the passing back (3.6 catches per game) and because his workload increases when the Lions are trailing. Joique Bell’s best box score days have come when he gets the clock-killing work – something that doesn’t project to happen here.

SITUATIONS TO CAPITALIZE ON

The Colts are not blind. They’re well aware that Dan Herron (and Ahmad Bradshaw before him, and Donald Brown in 2013) are far more effective backs than Trent Richardson, who is averaging a pathetic 3.09 YPC in 29 games as a Colt. So why did they insist on giving Richardson half the work all year? It was an attempt to keep their best players healthy at an unforgiving position. It didn’t work with Bradshaw, who went down in Week 11. But it has worked with Herron, who had the bubble wrap put on him in a meaningless Week 17 contest at Tennessee. Note that while Richardson was still rotating with Zurlon Tipton in the fourth quarter (taking handoffs from Matt Hasselbeck), Herron’s final touch came one minute into the third quarter.

We saw the Colts do this last year as well. Richardson averaged 13.2 touches per game in the 2013 regular season, but touched the ball a total of four times in two postseason games. Donald Brown was freed in those playoffs, getting a total of 33 touches. So by plugging in Herron, we get a potential feature back for $5400 in a game his team is projected to score 26 points in.

2. Cam Newton putting the team on his back 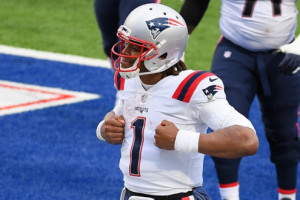 Hesitant to run at the start of the season due to ankle and rib injuries, Cam Newton’s upside was capped. Now knowing he needs to use his legs to carry his team, the upside is large. In a must-win Week 14 game at New Orleans, he went 12-83-1 on the ground. Just a week after fracturing his back, he went 12-63-1 rushing against the Browns. In the Week 17 NFC South championship game, Cam put up 6-51-1 and it would have been much more if the Panthers weren’t up 24-3 at halftime. Now we have a playoff game, meaning there’s no better time than now to cut loose and run. In last year’s Wild Card loss at San Francisco, Newton rushed 10 times for 54 yards, well above his 2013 regular season average of 6.9 times for 36.5 yards.

So we know the motivation will be there for Cam to run. What makes that even sweeter is that the Cardinals are a man coverage team and therefore one that is susceptible to scrambles. Colin Kaepernick hit them for 7-63-0 in Week 17, while Russell Wilson went for 6-88-1 Week 16 and 10-73-0 Week 12. If the weather gets me off my No. 1 point-per-dollar QB in Ben Roethlisberger, I’ll take the $200 savings and go to Newton.

Ben Roethlisberger against the Ravens secondary

I’m aware of the current weather forecast in Pittsburgh for Saturday night: 100 percent chance of rain, 10-20 MPH winds, 41 degree temperatures. Rain doesn’t scare me very much, but a slow and soggy field combined with sustained winds do knock down projections. With the help of RotoGrinders’ meteorologist Kevin Roth, I’ll make a call on Ben Roethlisberger Saturday afternoon.

Hopefully it clears up a bit, as this is a perfect storm on paper for Big Ben. Le’Veon Bell (knee) will either be out or less than 100 percent and the Ravens are fielding Ladarius Webb plus a bunch of street free agents in the secondary. The only move for OC Todd Haley is to ride or die with Roethlisberger’s arm, slick ball or not. We know this is a big, strong-armed quarterback that plays well in poor weather. Not Tom Brady kind of all-time great bad weather, but far from Peyton Manning noodle-arm status. We also know that the Ravens front seven, getting Haloti Ngata off suspension, is not one to mess with anyway. When these two teams met in Pittsburgh Week 9, Steelers running backs rushed 21 times for 47 yards (2.23 YPC) with no touchdowns, while Roethlisberger went off for 340 yards and six touchdowns.

WHO I’LL HAVE MOST OF IN FANDUEL CASH GAMES