The sports card market has been on fire as of late and as a result data is being generated at a furious rate. Unfortunately this momentum has picked up so quickly that our ability to capture and analyze the data is still far behind. Geoff over at SportsCardInvestor.com is doing his part to collect and visualize this valuable data for us and I plan to do my best at exploring ways we can use this data to profit.

One concept we have introduced over the last few weeks is the Market Cap of a player’s graded cards. In this article I will be reviewing the market cap for Luka Doncic 2018 Prizm cards and how it compares to the market cap of LeBron James. You can find the calculation explanation and LeBron analysis here. 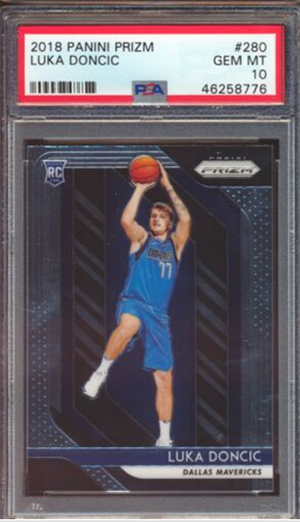 Before I dig into the actual analysis I do want to get a few things out of the way. I initially wanted to gather data for Luka’s Prizm, Select, and Optic rookie cards however I quickly realized this was going to be too tall of a task. Instead I decided to compare Luka’s Prizm rookie market cap to LeBron’s benchmark rookie card which is Topps Chrome. Where possible I used a 7-day average price from SportsCardInvestor.com ‘s Price Movement Tool. Where that was not available I then searched the card using the Chart Any Card tool and used the most recent sales for that price. Where all else failed I benchmarked cards to similar variations and grades to come up with a good estimate price. Many of the cards I did not find data for have very small populations which means a slight adjustment to the price would not change much at all when looking at the big picture. One final thing to call out is that LeBron’s pricing for this analysis was captured in late April while Luka’s is as current as early June. LeBron’s prices are up around 20% over the last 30 days so his actual market cap will be higher than what is reflected below. 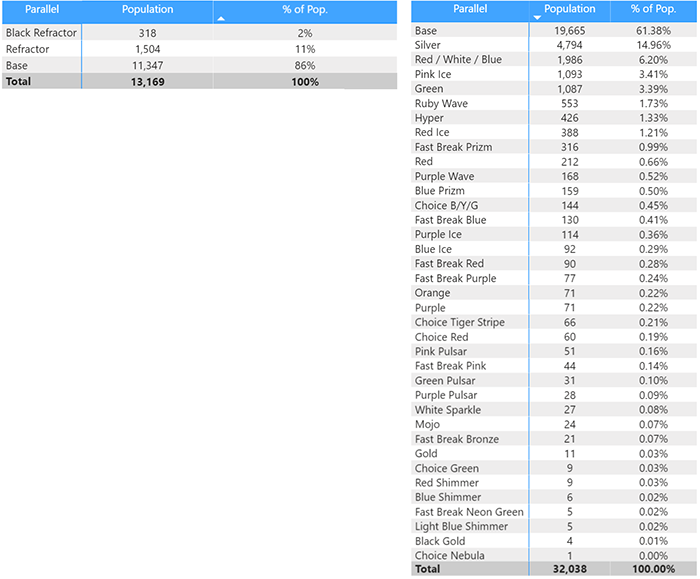 As I was gathering the data for this analysis one thing became very clear. Panini LOVES parallels in their modern day sets. The table on the left above represents the break out of LeBron’s Topps Chrome variations while the right is the same for Luka’s Prizm set. Doncic comes in at 37 parallels compared to only 3 for James. This is a massive discrepancy and later in the article I will tell you why I think this is a good thing for the future of sports card collecting and investing. While there are an overwhelming amount of parallels for Luka’s prizm rookie, eight cards make up over 90% of the population. Before we get to the heavyweight battle of market caps let’s look at how market cap is distributed among the Luka parallels.

Scarcity Isn’t Everything, But Close 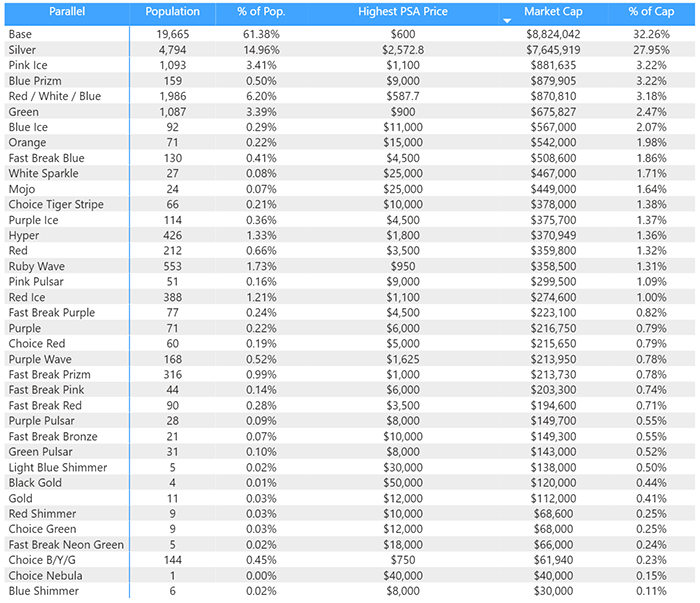 I have added the market cap for each of Luka’s parallels to the table above and the highest PSA price for each as a reference point. Almost 60% of Luka’s market cap is made up of his Base and Silver cards. Luka’s base card has a pop % slightly twice the size of its market cap which is a much larger discrepancy than LeBron’s Topps Chrome base which had a pop % 1.4 times the size of its market cap. Luka’s Silver on the other hand has a pop % that is roughly half of its market cap or said another way the market cap is 2x the pop %. Again there is a noticeable difference from LeBron’s comparable Refractor which has a market cap 2.6x its pop %. Both of these discrepancies are most certainly attributed to the additional parallels you can chase in Luka’s prizm collection. WIth so many ultra-rare parallels available, prices for the plentiful Silver and Base variations are held in check.

Another thing I noticed from above was the seemingly counterintuitive pricing for some of the rarer parallels. Despite making up less of the population than the silver parallel, the Pink Ice, Red/White/Blue, and Green Parallels all come in at lower price points and lower market cap multiples as compared to their pop %. Geoff from SportsCardInvestor.com has said before that he believes that the Green parallel suffers in popularity from being a retail exclusive. Regardless of why this happens it is clear rarity isn’t everything. If there is a card that people value and demand more than another the market will reflect this regardless of population. As we move down the list though we can see the trend normalizes to something we would expect. It’s worth remembering the numbers should be taken with a grain of salt, due to limited data, but I am confident the bigger picture it portrays is accurate. The caveat seems to be that things like Fast Break and Retail exclusives appear to be penalized much like Geoff has suspected on past Sports Card Grinder shows.

I wish I could have superimposed a drumroll into the article as you scrolled to this section. Despite massive hype in the industry over the last couple of years, Doncic is no match for King James at this point in his career. With $78 million in market cap, or $93 million if you estimate for the price appreciation since the data was collected, LeBron triples the market cap of Luka’s Prizm rookie despite having a smaller population. I would be lying if I said I was not a little bit worried that we were overvaluing Luka’s rookie cards. Seeing these numbers will help me sleep a little bit easier at night. While I do think that Luka’s secondary sets, like Optic and Select, could close the gap if we were to look at those relative to LeBron’s top sets, a lot of that might be offset if we were to include high-end autos and RPAs. Trusting that these numbers are as good of an estimate as we are going to get, I think they make a lot of sense. While as a market we expect Luka to have a storied career, we recognize LeBron has already made his past hype a reality and he is rewarded for that. As Luka achieves some of the things we expect him too, we should see him close the gap and potentially come close to matching LeBron’s market cap. It would take a lot for Luka to pass LeBron, so it is nice to know we have a lot of room to work with.

I would like to close with something I teased earlier in the article which is the abundance of parallels in some of the newer sets. Some people might think that this is a bad thing as it can water down the meaning of the cards or allows Panini to be more under the radar about increasing population counts. I understand these points of view but I actually feel quite the opposite. If I wanted to add a base PSA 10 of LeBron to my collection I would need to shell out over $10,000 to get it done. Even if Luka delivers on the hype and his prices go up 5x I am still only looking at a $3,000 investment to add his base to my collection. On the flip side of the coin, if I have an unlimited bankroll to spend, I can flex a little and chase the 1 of 1 Luka Choice Nebula which would certainly come at a six figure price tag if not higher. The existence of so many parallels creates the opportunity for investors and collectors alike to get in at whatever level makes the most sense for them. The number of options can be overwhelming but what is most important for long-term ROI is not the color of the card but rather the player you choose to invest in and how good of a deal you get relative to the fair market value of that card.

I hope that you enjoyed this article and feel better about your investment in Luka Doncic. I think this analysis is evidence that the market is fairly good at valuing players relative to their peers and the legacy they have created. While the data is hard to get I do plan on expanding these concepts and digging into more market cap data in the future. Let me know in the comments if there are any particular players you would like me to look at.