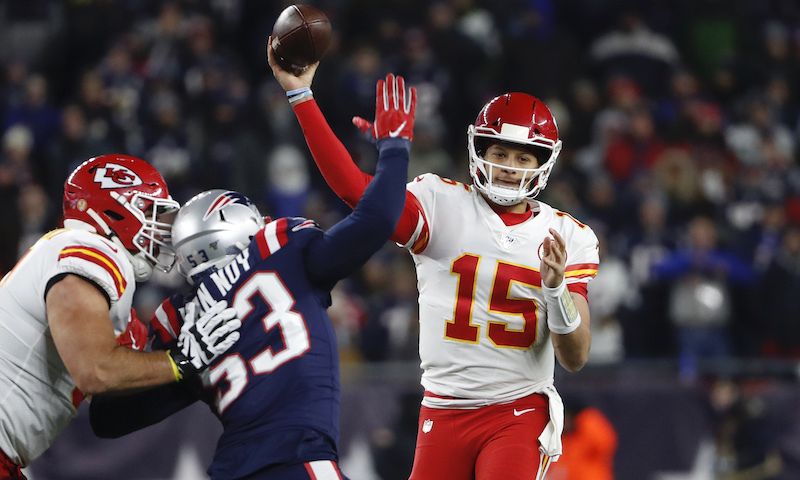 The Falcons vs. Packers game has been pushed back to 8:40 PM ET to make room for some unexpected Monday Night Football guests. Unfortunately, Cam Newton won’t be partaking as the Patriots and Chiefs join the party and Week 4 of the NFL season concludes, but bettors still get 2x the action as three NFL MVP winners take the field on Monday night, plus two future Hall-of-Fame coaches go head to head in Kansas City.

Use RotoGrinders odds tool to compare NFL odds across the online sports betting industry and determine which sportsbook is best for your NFL betting picks.

Just a few days ago the New England Patriots were 7-point underdogs, making it only the third time since Tom Brady and the Patriots won their first Super Bowl in 2001 that oddsmakers have favored a Patriots opponent by at least a touchdown. Fast forward a few days and a positive COVID test later, and the Chiefs are now double-digit favorites ahead of their rescheduled game slated for Monday Night Football.

With Cam Newton out, Brian Hoyer and possibly Jarrett Stidham are left with the responsibilities behind center. It’s poor timing to face their toughest test yet in the post-Brady era, as the Patriots need a win or else they’ll fall two games behind the Buffalo Bills in the AFC East.

Fresh off a dominant victory in Baltimore, and arguably the most impressive performance of the year, the Chiefs have jumped ahead of the Ravens at sportsbooks as the Super Bowl betting favorites. The Chiefs’ Super Bowl odds are as short as +350, and Oddsmakers price them +185 to win the AFC Championship.

Unlike this time last year, the Chiefs not only have the best quarterback and offense in the NFL (even if they aren’t scoring as many points as the Packers and Cowboys), but they also have a defense that is holding opposing offenses to 47% success on passing plays — making them the 11th toughest defense to pass against, per GridironIQ.

The Chiefs secondary isn’t bad, but mainly, it’s Kansas City’s pass rush that causes trouble. Opposing quarterbacks stay clean on merely 59% of drops backs when they’re playing the Chiefs. Only three teams are hitting quarterbacks at a higher rate. This partly explains why it’s been so profitable to bet on the Chiefs: It doesn’t matter that their rush defense is suspect; when they get out to big, early leads, as they so often do behind Mahomes’ arm and pass-catchers like Travis Kelce and Tyreek Hill, the defense then makes it difficult to pass.

In fact, the Chiefs are 26-12-1 against the spread since Mahomes has taken over as Kansas City’s franchise quarterback. They’re on a 12-game winning streak, with their last loss coming against the Tennessee Titans in Week 10 last year. Whether you want to look at Super Bowl odds or ATS records, Andy Reid, Mahomes and the Chiefs are what Tom Brady, Bill Belichick and the Patriots used to be.

The Patriots aren’t likely to pull off an upset — that was a tall task even if Newton was playing. Veteran Brian Hoyer is expected to start Monday night, but that doesn’t bode well for Patriots bettors, either.

The last time Hoyer started, he threw three interceptions and completed less than 50% of his passes in a loss to the Dolphins. Now, part of me believes Belichick has more intention in playing Stidham than he’s letting on, but if it’s strictly Hoyer, the Patriots will have trouble getting away from this Chiefs pass rush and thus won’t be able to keep up.

I lean Under when it comes to the point totals. Patriots will try to control the clock and keep the ball out of Mahomes’ hands. However, the Chiefs may give them no choice. If that’s the case, I still think the Patriots struggle to score enough points to get this one to go over.

My bet, though, is on Mahomes continuing his dominance against the sportsbooks.

Averaging an NFL-high 40.7 ppg., Aaron Rodgers and the Packers have put the NFC and bettors on notice going 3-0 straight up and against the spread. It didn’t matter that they were without Davante Adams last week inside the Superdome, but it might matter this week against the Falcons.

The Packers won’t only miss Adams, who continues to nurse a hamstring injury, but they’re also missing their second-leading receiver in Allen Lazard.

So, uh, yeah, it’d be great time to have drafted a wide receiver in the first or second-round instead of a quarterback and running back, wouldn’t it Brian Gutenkunst?

Apparent last week with Adams sidelined, Green Bay’s secondary receivers have yet to earn Rodgers’ trust outside of Lazard. Against the Saints only one pass was caught by another receiver — the rest were to tight ends and running backs.

Rodgers did turn James Jones into the league-leader in touchdown receptions, and Jeff Janis racked up 145 receiving yards and two touchdowns in a playoff game, so there is hope despite the injuries. We know Rodgers can drop dimes, but he can’t catch them, too. And unfortunately, Marquez Valdes-Scantling, the next receiver in line on the Packers’ depth chart, has shown a penchant for dropping passes.

The Falcons aren’t exactly healthy, either, but all signs point toward receivers Calvin Ridley and Julio Jones starting. Even if one of them doesn’t, Russell Gage and Hayden Hurts are much better options than Rodgers has at his disposal.

With the news that Adams is out, these odds are falling fast across the sports betting industry. Bet on the Falcons +6.5 as soon as you can. I’ll also bet on the Falcons 1H team total — Over 10.5 points. An already overrated Packers defense will be without their leading tackler, linebacker Christian Kirksey, and other top defensive players are still listed as questionable, such as their best coverage man, cornerback Jaire Alexander, and leading pass rushers, Kenny Clark and Za’Darius Smith. Like the first game on tonight’s schedule, I won’t be taking a position on the total but I do lean Under.

The Packers are in a tough spot. With home field advantage largely nullified and the Falcons desperately needing a win, don’t be surprised if Atlanta upsets Green Bay outright.