Brandon Lowe: Over 1.5 Total Bases: Lowe has been a fantastic hitter when going up against RHP this year, and he draws a great matchup today. Eshelman is making his first major league start, and while his minor league numbers have actually been decent this year, he is not projected to be a very good major league starter with a projected 5+ ERA. Additionally, the Baltimore bullpen has been the absolute worst bullpen in baseball this year with a 4.59 xFIP, giving up a significant amount of power while owning the sixth-highest ISO. Overall, Vegas has Lowe pegged at +340 for a homer, but all he needs is a double or two hits for this prop, which gives him multiple outs. Just take the over and move on.

Jonathan Villar: Under 1.5 Hits+Walks: This prop is pretty close to a lock here. As usual, the Rays will open with Stanek and then bring in Yarbough, both of whom are good pitchers. This game is being played in TB too, which is a bit of a ballpark downgrade for Villar, and while I think the odds are pretty good of Villar getting a hit or a walk (Vegas has him pegged at -227 to get a hit and he owns an 11.7% walk rate), I think the odds of him getting multiple are very low. Roll with the under. 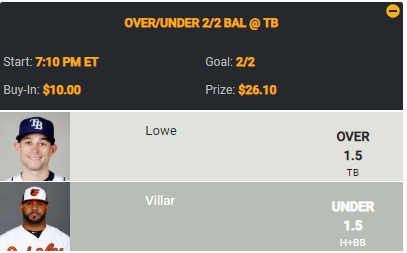 Eric Hosmer (+.5) vs Manny Machado: Total Runs/RBIs: The first thing I generally look at in this category is the likelihood that either batter gets a single run/RBI. Looking at the Vegas implied total for the Padres, we see that the Padres are only expected to score 4.47 runs, which means there’s a decent chance that both hitters fail to get a run/RBI. Next things I look at is batting order. Hosmer is batting in front of Machado, so there’s a decent chance that if Machado gets an RBI, it was Hosmer that he hits in. Lastly, looking at the overall numbers vs RHP, we see that Hosmer actually has better numbers with a .196 ISO & .364 wOBA compared to Machado with a .164 ISO & .329 wOBA. Add in that Hosmer has the tiebreaker in this very volatile category, and Hosmer is the clear option here.

Hunter Renfroe (+.5) vs Franmil Reyes: Total Bases: Looking at Renfroe and Reyes’ numbers vs RHP, they have both been great this year, owning around a .315 ISO & .360 wOBA. This prop completely comes down to the tiebreaker. In all likelihood, Reyes is going to win this 35% of the time, while Renfroe is going to win it 35% of the time, but 30% of the time they are going to end up with the same amount of total bases. In that scenario, Renfroe gets the win, so I’m picking him here. 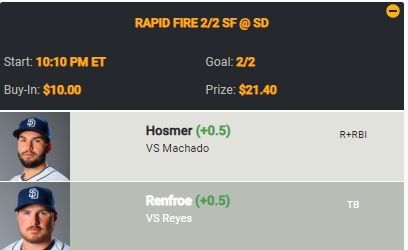 Jeff Samardzija: Over 4.5 Ks: Looking at Vegas props, Samardzija is currently pegged at 4.5 Ks, but there is heavy juice on the over. While the Shark is only an average strikeout pitcher, he gets a matchup against one of the heaviest strikeout teams in the league vs RHP in the Padres, who own a 24.3% K rate in their projected lineup. There’s a decent chance that Samardzija gets beat up a bit in this start, but the K upside is through the roof. Take the over.

Eric Hosmer: Under 1.5 Hits+Walks: While Hosmer is a decent batter and this is a decent matchup here, two hits and walks is too much to reasonably expect out of Hosmer. The Padres are playing at home and are the favorites, so we can’t fully expect Hosmer to end up with a ninth-inning AB here. Additionally, Hosmer owns a low 6.7% walk rate, so the likelihood of Hosmer getting a walk is relatively low. I think the odds of one hit/walk here is strong, but the odds of two is fairly low.

Manny Machado: Over 1.5 Total Bases: Currently Vegas has Machado pegged at -333 to get a hit and +275 to get a home run. In order for Machado hit this prop, he must get either a double or better or get two hits. With 1-to-3 odds that Machado will get a hit and a 50% chance that it is a double or better considering Samardjiza’s 44.1% hard hit rate vs righties, this over has around a 60-70% chance of hitting. I’m on the over. 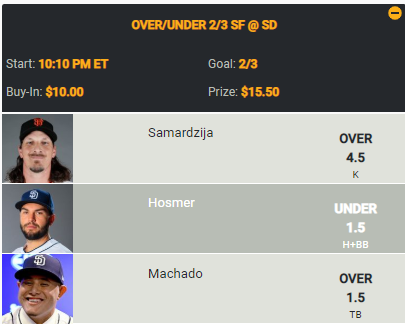