Nikola Vucevic: Over/Under 22.5 Points: All I should really need to say on this is that you can look over at the SharpSide app, check that the current over/under on Vuc and see that it is set at 21.5 with heavy juice on the under, but there are more reasons to pick this prop. Looking at Vucevic’s game log, we can see that he has only hit over 22 points three times in his last eight, and in that span he has played NO, ATL, CLE, WAS, and DAL — all of those are fantastic matchups for centers. Next, we can simply look at the last matchup against PHI (which was earlier this month), and we see that he only put up 12 points. Overall, this is just a lock for the under.

Ben Simmons: Over/Under 9.5 Rebounds: This is another spot where just looking at the SharpSide app will tell you what to do, as Simmons is only pegged for 7.5 rebounds (granted there is some heavy juice on the over). Looking at Simmons’ game log, he has failed to cover the over at this amount seven of his last eight games. With this team at full health, it’s going to be a likely scenario that Simmons ends up with single-digit rebounds more often than not. Take the under here and move on. 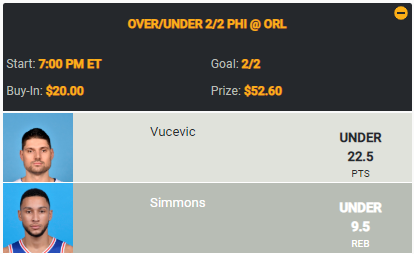 Paul George: Over/Under 29.5 points: This prop isn’t quite as obvious as the last one was, as George is currently set at 29.5 points over on the SharpSide app with a bit of juice on the under, but I think that this one is pretty safe. George has been right around the 29-point mark in most of his last few games, but tonight he draws a matchup against a slow-paced, strong defensive team in Memphis (even though they aren’t at full health). There is also a decent chance that this game gets a bit out of hand and George isn’t forced to play a full complement of minutes. My suggestion is to take the under here.

Jonas Valanciunas: Over/Under 10.5 Rebounds: The ShapSide app currently has this props set at the same line, but there is a bit of juice on the under right now. I know you are probably thinking that JVal has been destroying the boards in the last three, but everyone else is thinking that and is probably hammering the over. Realistically, we all know that JVal can put up a dud in any given matchup (in fact he did in the previous five prior to this streak) and that a matchup against Adams is far from an easy one. JVal could easily end up with double0digit rebounds here, but odds are that he doesn’t. Take the under. 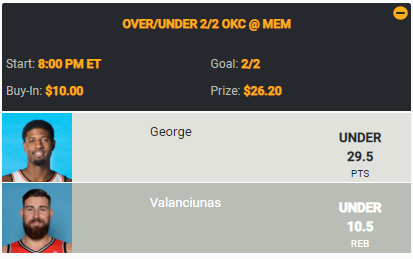 Before I get to the breakdown of each prop, I should probably note that I have taken the under for all of these picks. In the case of a blowout, it is likely that all these props will hit the under, and in case the game is not a blowout, it’s likely you still hit two and get the win.

Rudy Gobert: Over/Under 13.5 Rebounds: I am very much aware that this is a good matchup for Rudy Gobert, but the SharpSide app currently has him set for 13.5 rebounds with heavy juice on the under, and this game could get out of hand really quick. I’m banking a little bit on the blowout here and expect it to hit the under pretty easy. Take the under. 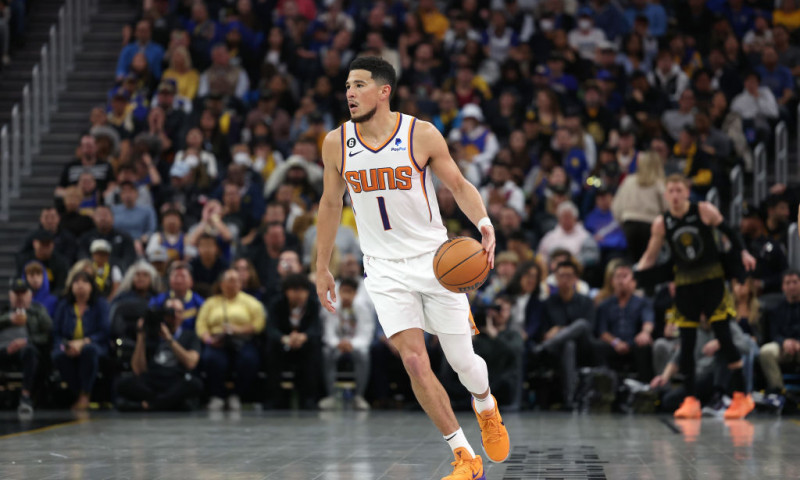 Devin Booker: Over/Under 2.5 Three-Pointers Made: I’m generally a big fan taking the under on three-pointers and steal/block props as they are a fairly volatile category. In all likelihood, Booker ends up with exactly two treys here and will occasionally end up with three. Looking at his game log, Booker has only hit from deep over two times in three of his last 14 games. The volume has been there occasionally in the last month, but he draws a tough matchup against the Jazz and this should be a slow-paced game. Take the Under

Donovan Mitchell: Over/Under 25.5 points: This was the hardest of the three to figure out here. Currently, the SharpSide app has Mitchell’s prop set at 25.5, and he has hit the over in roughly half of the games he’s played in the last month, but there is a decent chance of a blowout here. Even if it stays close, with the Jazz at close to full health, I don’t really see it being likely he hits the over. Just take the under and know that you only have to hit 2/3 on this prop to win. 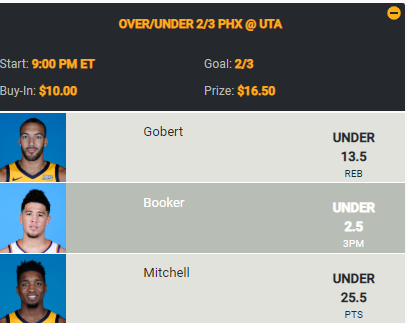