NFL Best Ball Strategy: What To Do With The Rookies

You may have noticed that DRAFT has recently added incoming rookies to the 2018 NFL Best Ball player pool.

Saquon Barkley, the Penn State running back viewed by many as one of the position’s all-time best prospects, already has a first round ADP (8.5 overall). While it is probably safe to say that Barkley belongs within the first two rounds, figuring out when to draft the other rookies can be very challenging, especially before the NFL Draft has even taken place.

The point of this article is not to identify exactly which rookies are going have great seasons, but to develop an optimal approach to this subset of the player pool at an especially uncertain time. This article outlines how I handle rookies at this time of the year, and why.

Editor’s Note: Use promo code “GRINDERS” when you sign up for DRAFT and get a free $3 contest entry and THREE months of RotoGrinders DRAFT Premium content!

ARE ROOKIES WORTH DRAFTING AT ALL?

Before getting into whether this is a good time of the year to target rookies, we need to determine if it is ever a good time to target rookies. To answer that question, we can look at how players have performed at each position during their rookie years. The tables below show how the top prospects from 2015-2017 fared relative to their best ball ADPs. As a reminder, a player’s “Win Rate” represents the percent of teams drafting the player that went on to win their best ball league, and the average win rate is 1-in-12 (roughly 8.3 percent). Let’s dive in.

Typically, there are not many rookies at quarterback or tight end that make it onto the redraft radar, especially prior to the NFL Draft. There have been between 2-6 per year at each position to garner a material number of picks in best ball leagues. You’ll find them here:

Only one out of twelve rookie quarterbacks generated an above average win rate over the past three seasons, and the majority of them were complete non-factors in fantasy leagues. Things do not look much better at tight end, where only one in nine players generated an above average win rate, and all but two players failed to crack a meager six-percent.

Each rookie wide receiver class is different, but I have found that typically there are about eight players who make some impression on redraft ADP. The table below shows the top eight prospects from each of the past three years.

While three out of twenty-four players generating above-average win rates is better than our quarterback and tight-end results, it doesn’t exactly scream “DRAFT ME!” We do see a little bit more of a ceiling in this group, however, with one player, Michael Thomas in 2016, finishing the season as a WR1, and another, 2017 Cooper Kupp, returning a top-24 finish on a WR83 price tag. Unlike at quarterback and tight end, at wide receiver I do not want to avoid rookies entirely, but I keep my exposure limited. 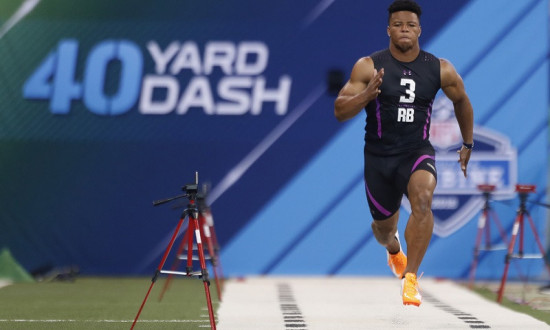 Again, each year is different, but I have found that roughly ten rookies make it into the redraft pool in a material way each year. Drafters are always hungry for that late round running back sleeper.

These are by far the most encouraging results. Not only is the hit-rate of 12 out of 30 players with above-average win rates much greater than we found at other positions, but the upside at the position also appears greater. Seven rookie running backs eclipsed a 10 percent win rate, including three of at least 15 percent. This is where we want to take our shots.

IS NOW THE TIME?

So far, we have established that it is not a good idea to target rookie quarterbacks and tight ends, but it may be worthwhile to take shots at the other skill positions, especially at running back. The next question is, does it make sense to draft these rookie running backs and wide receivers now, before we even know which NFL team will draft them?

I draft dozens of best ball teams over the course of the offseason, and one of my goals is to keep the average price I pay for each player as low as possible. I want to buy more when ADP is depressed and focus on other underpriced players when ADP jumps. There is a lot of uncertainty surrounding rookies today, and uncertainty almost always drives prices down. That suggests that rookies may be underpriced at this time of year. We test that hypothesis by looking at rookie ADPs from the past few off-seasons.

The following charts track the offseason ADPs of the top six rookie wide receivers from each of the past three seasons. The red dotted-line represents the date of the NFL Draft. 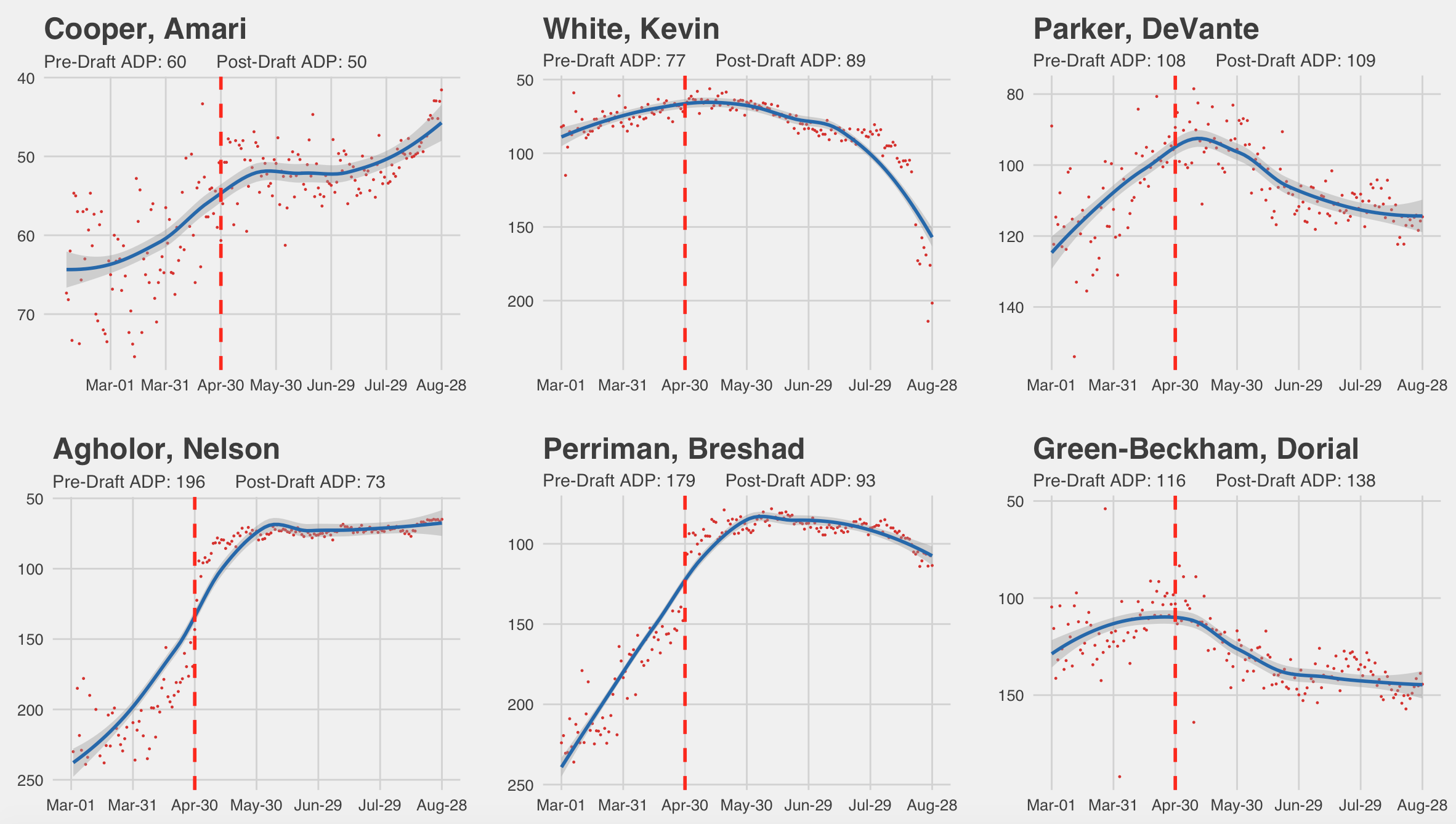 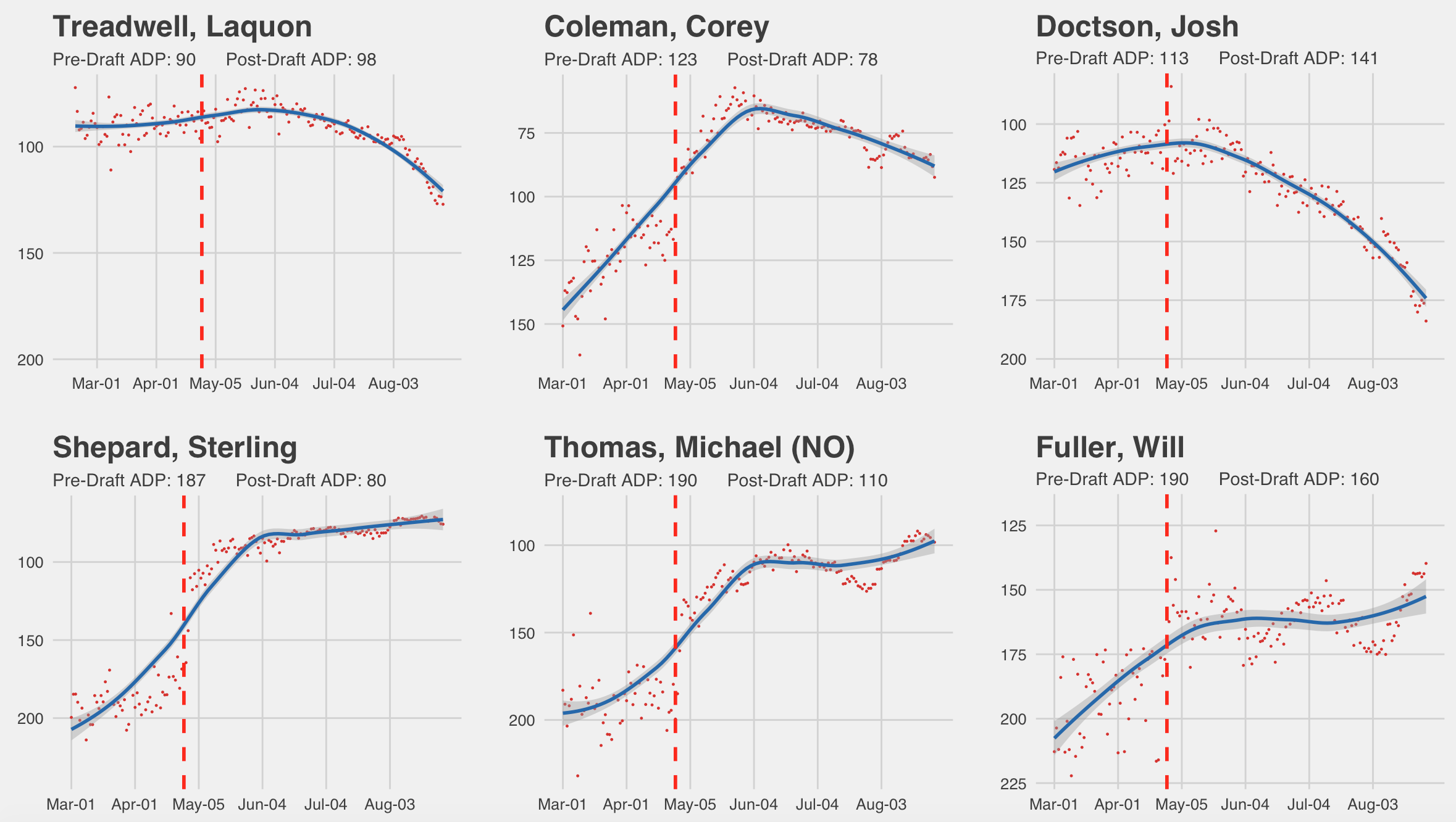 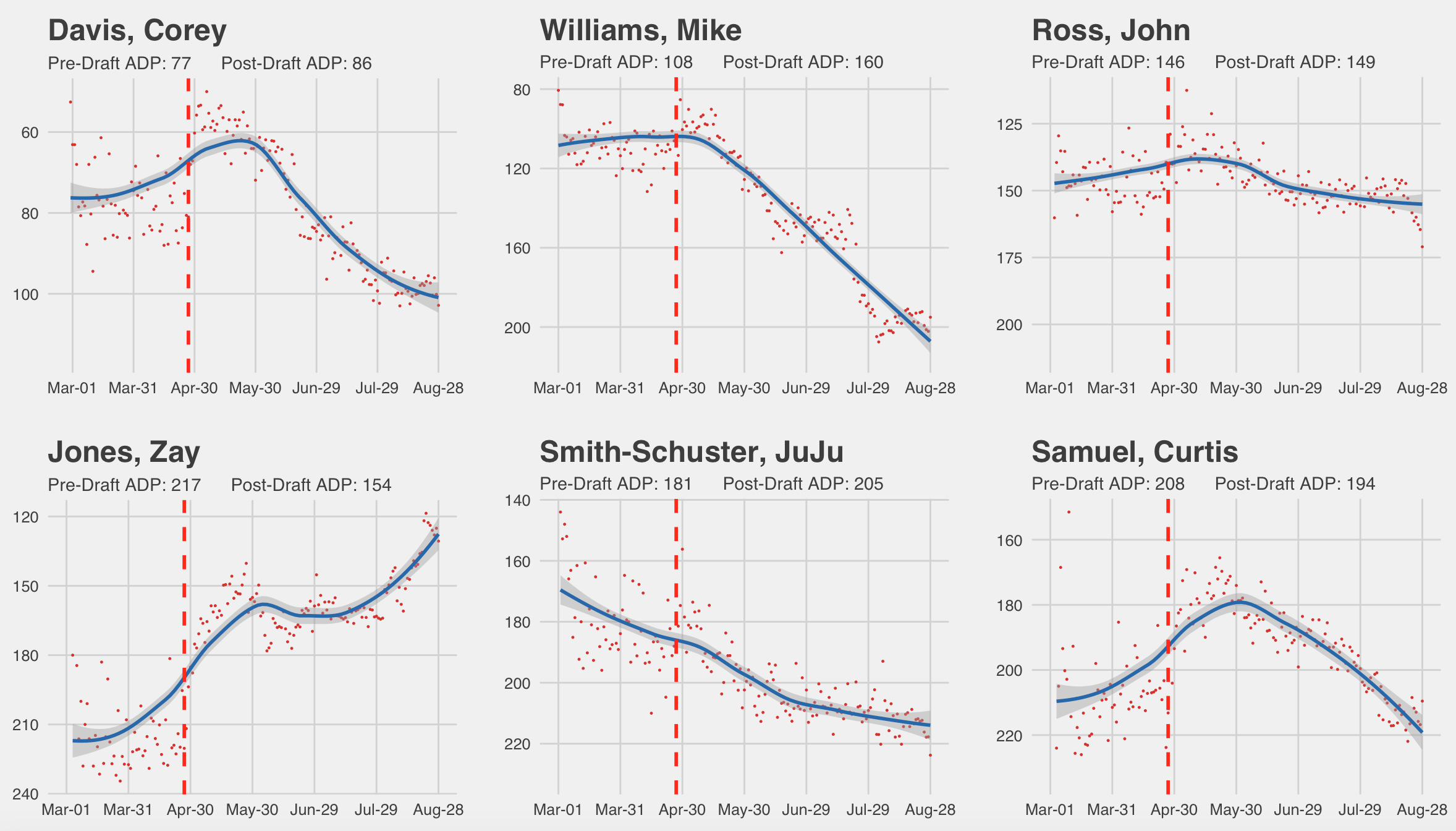 In half of these 18 cases, the wide receiver became more expensive following the draft, and steep declines appear just as common as steep rises. That pricing hit rate, coupled with the relatively low production hit rate among wide receivers tells me it is not imperative to target rookie wide receivers early in the offseason. My preference is to see where the player lands, and then come up with a more confident valuation before aggressively buying.

Running Backs – The time is NOW!

The following charts track the offseason ADPs of the top nine rookie running backs from each of the past three seasons. The red dotted-line represents the date of the NFL Draft. 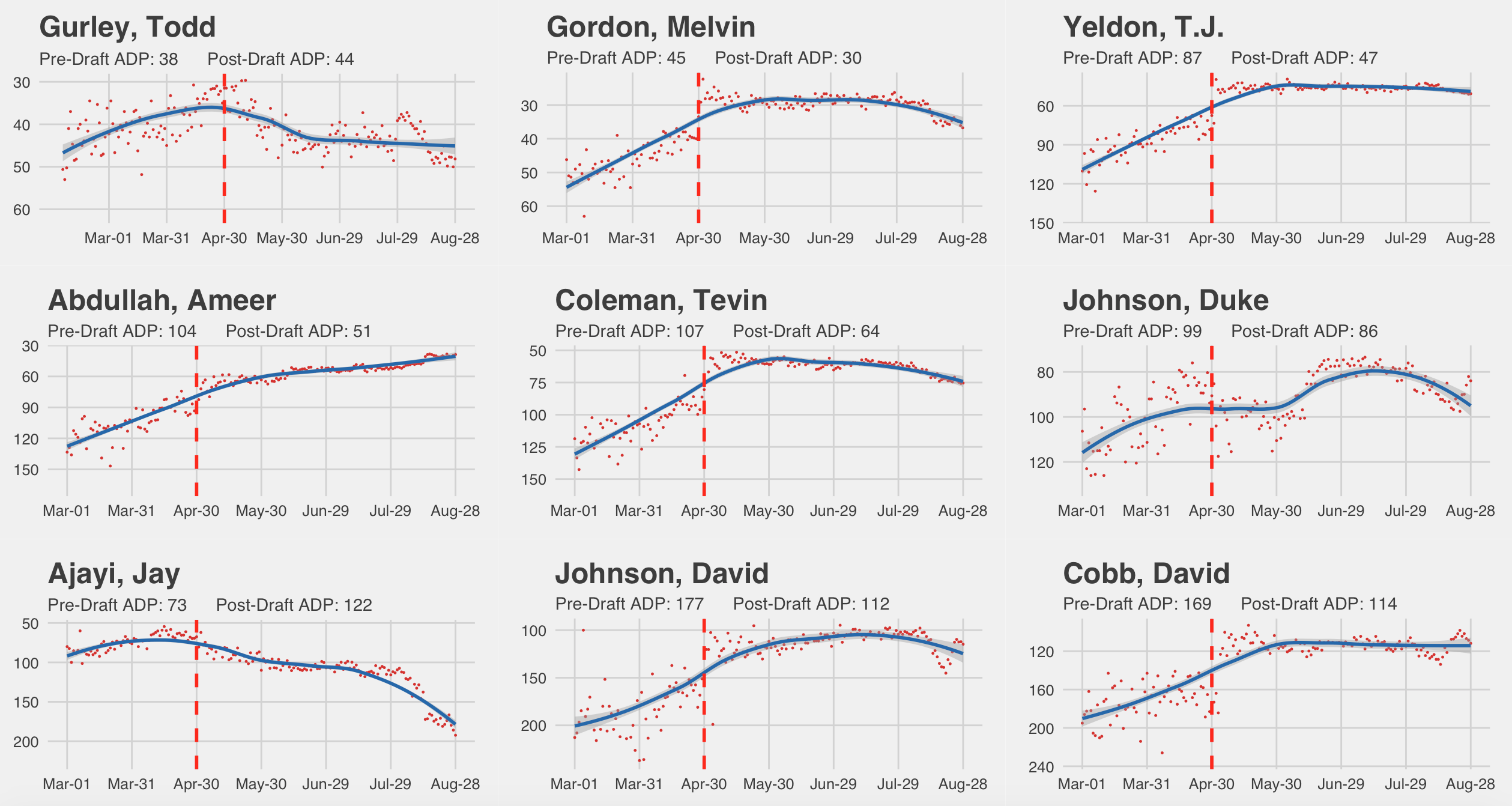 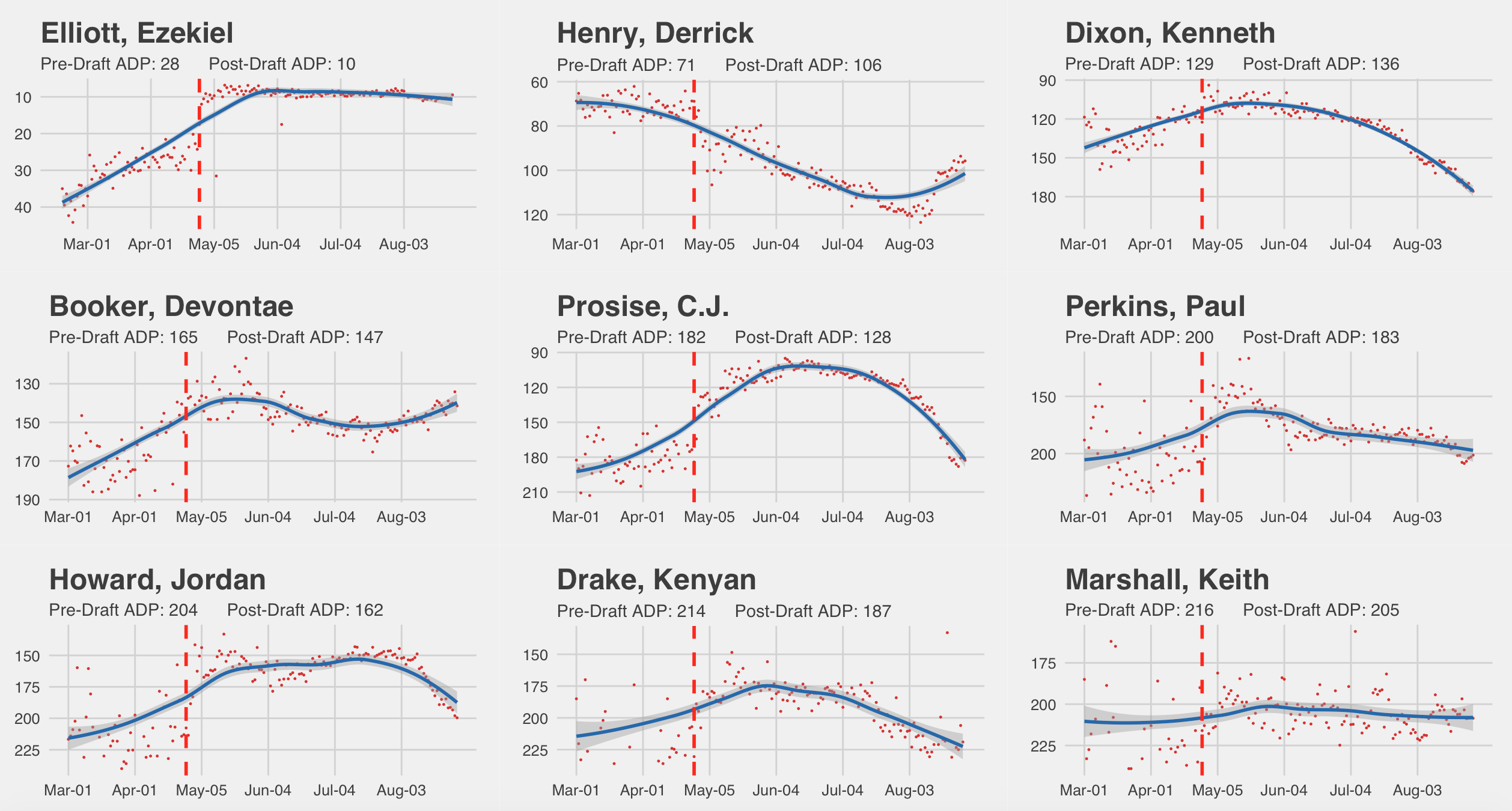 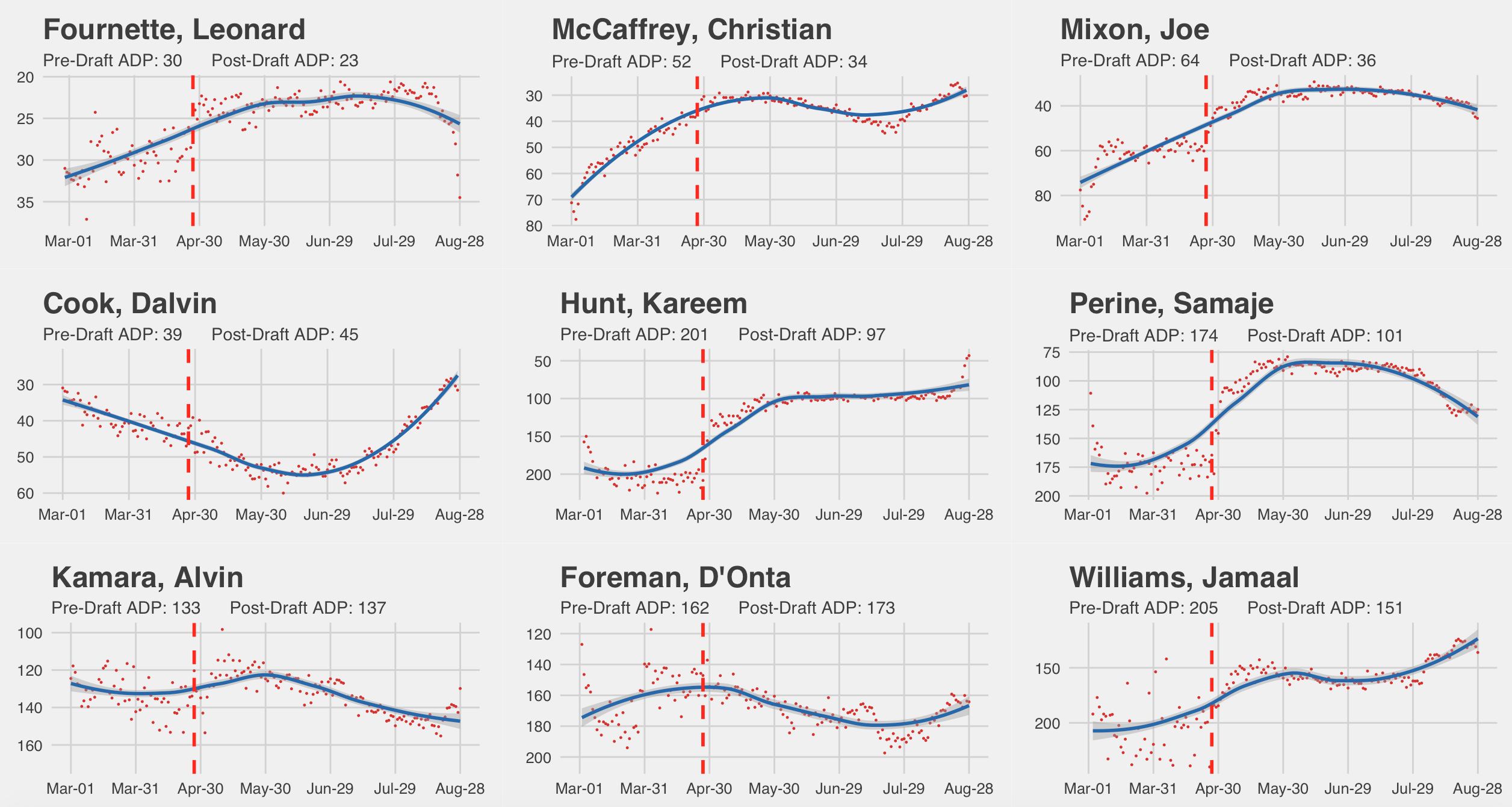 To wrap things up, here are the key takeaways from this study:

1. Do not aggressively target rookie quarterbacks or rookie tight ends (now, or later in the offseason).

2. Rookie wide receivers can be a worthwhile investment, but there is no hurry to get them into your best ball portfolio, and my advice is to wait until after the draft to identify your targets.

3. Rookie running backs have provided the most upside and the highest hit rates, and they tend to get more expensive after the NFL Draft. Get your rookie running back exposure now, while it is still relatively cheap, then consider fading over the summer.