NOTE: The numbers below reflect an average of defensive fantasy points from the start of the 2014 season through Week 14 2016. Top plays and secondary plays only started in Week 7 2016 as a way to breakout defense that fit the criteria into two separate categories.

The defenses that fit the criteria did not have a very strong week. I know I saw in the comments section that several people mentioned how it was the first week where they really did not like any of the teams. The Lions as the top play only produced five fantasy points, while the Patriots produced six and the Colts produced four. The only play that you could argue worked out was the 49ers. They produced eight fantasy points, but at a bargain bin price point, this play could have worked out. That being said, if you did not have the Falcons, it was tough to finish real high in GPPs this week. I ended up on one share of the Falcons for the week. For some reason I decided to put together a cash team last, and with already having shares of the Lions, Vikings, and 49ers in my GPPs, the Falcons price just fit in that team.

Defenses that Fit the Criteria

At Home, Favored and Opponent Team Total of 21 points or less

Before we get into the picks this week, I just wanted to point out the Seahawks, who play on Thursday night. I do not highlight Thursday games in this article, but this game has the lowest team total I have ever seen by 3-4 points. The Rams are projected to score under 12 points in this game. They also are giving up the most fantasy points in the NFL to opposing defenses. If you are playing the slate that includes this game, it’s hard to not try to jam the Seahawks into your lineup. That being said, there are a lot of other good options this week. 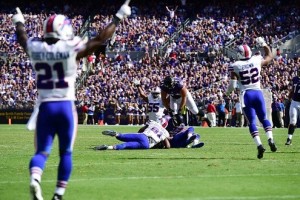 There are a lot of options this week so I will try to keep this shorter. The Bills defense has been pretty mediocre in terms of total defense and total offense but they are tied for fifth in the NFL in sacks. The main reason to like them this week is their opponent, Cleveland, who is giving up the third most fantasy points to opposing defenses. The Browns are in the bottom three in the league in both total offense and scoring offense, while giving up by far the most sacks in the NFL, and turning the ball over almost two times per game. The Bills are one of my favorite cash game and GPP plays this week.

The Houston defense currently ranks sixth in the NFL in total defense and 13th in scoring defense. But the reason they are a top play this week is their opponent, Jacksonville. The Jaguars are currently giving up the sixth most points per game to opposing defenses, at just under nine points per game. Jacksonville is in the bottom third of the league in both total offense and scoring offense while turning the ball over the third most in the NFL, with 25 turnovers. Blake Bortles has accounted for 19 of those and is always a good target for opposing defenses. This is a situation where I would probably take Houston on FanDuel and Buffalo on DraftKings for the slight discount.

Baltimore is a top four defense this year in both total defense and scoring defense. They also are tied for the NFL lead with 25 takeaways. Their opponent this week, Philadelphia, was very stingy to defenses earlier in the year. This is why they currently are ranked 19th in giving up fantasy points to opposing defenses. That has changed over the last four games where Carson Wentz has turned the ball over eight times and has been sacked 11 times. I think Baltimore makes a strong play this week, and could even be in cash game consideration of their price on DraftKings.

The Chiefs defense has had a bend but don’t break mentality this season, giving up a lot of yards, but ranking eighth best in scoring defense. This is mainly because they are tied for the league lead in takeaways with 25. They are extremely hot right now scoring double digit fantasy points in 9 of their last 11 games. The reason they are not a top play this week is that their matchup this week is a neutral one, as Tennessee is giving up the 15th most fantasy points to opposing defenses. That being said, I think you can ride the hot hand in GPPs this week.

The Giants defense struggled a little bit the first six weeks of the season, but they have come on strong since then. They have averaged 12 fantasy points per game over their last seven weeks. Even more impressive, over their last three weeks they have 12 sacks and eight turnovers, and they just held a strong Dallas offense to seven points scored on Monday night. The Lions are not the best matchup, but they also rank in the bottom half of the league in both total offense and scoring offense, while giving up over two sacks per game. The Giants make a nice GPP play this week, especially on DraftKings.

I originally thought the Falcons might be very popular this week coming off a week where they scored 26 fantasy points and now facing the 49ers. But it looks like both sites priced them up this week which is why I consider them a secondary play. The Falcons have also been average to below average in most defensive categories this season. This play is mostly just going against the 49ers offense and riding the hot hand of the Falcons. The 49ers are giving up the tenth most fantasy points to opposing defenses and are a bottom ten offense in most categories. I will likely not have many shares of Atlanta considering the price, but they are a GPP play this week.

The Cowboys come in as my least favorite option of the week that “fit the criteria.” Dallas does have a top five scoring defense this year and have created four turnovers over the last two weeks. But their opponent this week, Tampa, has been pretty stingy to opposing defenses, giving up only the 17th most fantasy points to opposing defenses. I will likely look elsewhere but Dallas is at home as pretty healthy favorites here.

The Vikings defense continues to lead the NFL in scoring defense and they also are second in total defense. The Vikings are also currently third in the NFL in sacks and they’ve picked up 13 of those sacks in the last 4 weeks. Their opponent this week, Indianapolis, is tied for second in the NFL for the most sacks allowed. So this matchup has one of the best pass rushes in the NFL against an offensive line giving up a lot of sacks. For this reason, I think Minnesota makes an interesting GPP play this week, and they should be low owned.

The defenses that fit the criteria already touched on eight teams above who fit my favorite defenses for the week. I do not expect to have shares of any other teams in GPP’s this week at this time but will update the article later as needed.