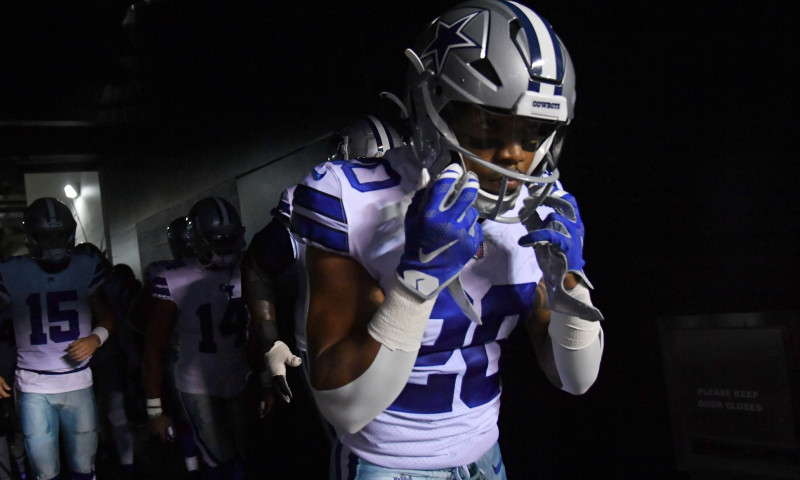 In Week 1, we successfully navigated an abundance of chaos, finishing 10-5-1, with correct underdog selections on the Pittsburgh Steelers (+7.5), New York Giants (+6), and Minnesota Vikings (+2.5). In Week 2, our streak of seven consecutive weeks with 10-plus correct picks came to an end due to an abundance of chaos, including the Cleveland Browns blowing 13-point lead in the final two minutes, and the Las Vegas Raiders failing to hold onto a 23-point second-half cushion. In Week 3, we correctly selected six underdogs en route to a 13-3 showing. In Week 4, we hit each of our top four selections, in addition to correctly nailing five underdogs. In Week 5, favorites dominated, and we won on 11 of our selections. In Week 6, we managed another positive week, despite a number of unexpected results around the league. In Week 7, we finished only 7-7, but six of our top eight selections won, salvaging the slate for confidence pool participants. In Week 8, we had our second-best week of the year, which included hitting each of our top seven selections! Week 9 was our second consecutive week with double-digit victories, despite multiple teams being on a bye. In Week 10, we took a beating thanks to a couple of major upsets, but bounced-back, as promised, in Week 11 – hitting each of our top-seven plays, including 11-of-14 overall! In Week 12, we had double-digit victories for the fourth time in five weeks. Last weekend, we were burned by the final injury report in a couple of places, but still managed to hit each of our top six confidence plays. We will look to continue our positive momentum in Week 14!

In preparation for the 2022 campaign, we evaluated each roster unit-by-unit
I will start by ranking each of my selections in order of confidence and provide reasoning on all of my top picks.

Last weekend, we had the Dallas Cowboys as our top confidence play of the week, and they delivered for us in a big way with a 54-19 victory over the Indianapolis Colts. Since Dak Prescott returned to the field in Week 7, the Cowboys are 5-1, with their only defeat in that span coming against the Green Bay Packers in overtime at Lambeau Field – a game in which Dallas led by 14 points in the fourth quarter. In their last six contests, the Cowboys rank 3rd in offensive EPA/play and 2nd in defensive EPA/play. In that same time period, the Houston Texans rank 32nd in offensive EPA/play and 20th in defensive EPA/play. Houston will also be without their top wide receiver, Brandin Cooks, on Sunday due to a calf injury. The return of Davis Mills as the starting quarterback is unlikely to be enough to pull off a major upset on the road in this spot. The Cowboys are far more talented on both sides of the ball – trust them to get the job done in Week 14.

Following a Week 10 bye, the Denver Broncos are winless in four games – having scored 10 points or fewer three times. Since Week 3, Denver is 1-8, and has scored 20 points in a game only twice in that span. Entering play this weekend, Russell Wilson and company rank 32nd in the NFL, averaging 13.8 points per game. After being on the sidelines for last weekend’s loss against the Cincinnati Bengals, offensive lineman Joe Thuney practiced in a full capacity on Thursday, making it likely that he will return to the field for Week 14 for the Chiefs. Kansas City leads the NFL in offensive EPA/play since Week 7, and the return of cornerback Trent McDuffie on the outside has helped this secondary unit tremendously. Intra-division games tend to breed closely-contested action, but it would not be surprising to see Patrick Mahomes and company win by two touchdowns against a much less talented opponent here.

Earlier this week, the NFL community learned that Buffalo Bills’ pass-rusher Von Miller underwent ACL surgery and will miss the remainder of the campaign. However, his absence is hardly a death sentence for the Buffalo defense. In Week 13, the Bills returned defensive end A.J. Epenesa, linebacker Tremaine Edmunds, and defensive end Greg Rousseau to the field, and held the New England Patriots to 10 points on Thursday Night Football. Josh Allen and company could be vulnerable in this spot if left tackle Dion Dawkins or linebacker Matt Milano end up on the sidelines, but the New York Jets are dealing with a number of injuries on their end as well. On Thursday, cornerback D.J. Reed, wide receiver Corey Davis, offensive tackle George Fant, offensive tackle Duane Brown, safety Lamarcus Joyner, and safety Ashtyn Davis were each limited in practice for New York. Assuming that Buffalo is healthy outside of Miller, they should be able to defend home field here to get revenge for losing to their AFC East rivals in Week 9.

When the Cleveland Browns defeated the Cincinnati Bengals 32-13 in Week 8 on Monday Night Football, the game plan was clear – run the football as often as possible against a Cincinnati defense that was missing their most important run defender, D.J. Reader. The Browns will have far less success against their intra-state rivals in Week 14 with Reader back on the field. From Week 1 to Week 3, with Reader on the field, the Bengals ranked 14th in Rush EPA/play and allowed only 258 rushing yards on 69 attempts (3.7 yards-per-carry). From Week 4 to Week 11, with Reader off of the field, Cincinnati’s defense ranked 27th in Rush EPA/play and allowed 913 rushing yards on 199 attempts (4.6 yards-per-carry). Since Reader returned to action, the Bengals have held Derrick Henry to 38 rushing yards on 17 carries and Isiah Pacheco to 66 rushing yards on 14 carries. Expect Reader to help this defense tremendously again this weekend. Further working against the Browns in this spot is the return of Deshaun Watson, who played with plenty of rust last Sunday in his first live game action in nearly two years. Through 11 games, Cleveland ranked 6th in offensive EPA/play with Jacoby Brissett under center. The larger concern, and one that Watson will not be able to fix – is a defense that ranks in the bottom-third of the NFL in most key metrics. Expect a reversal of fortunes in the rematch between these two teams, with the Bengals earning the victory.

On Thursday Night Football, the Las Vegas Raiders will be without three key members of their defense – defensive tackle Andrew Billings, linebacker Jayon Brown, and cornerback Rock Ya-Sin. However, the Los Angeles Rams could be down to their third string quarterback or panic-starting newly acquired Baker Mayfield, who arrived in Los Angeles less than 24 hours ago, after being claimed off of waivers earlier this week. The Rams will also be without wide receivers Cooper Kupp and Allen Robinson, in addition to offensive lineman Joseph Noteboom on the offensive side of the ball. Defensively, Los Angeles will be missing defensive tackle Aaron Donald, linebackers Travin Howard and Terrell Lewis, and defensive back David Long Jr.. It might not be the cleanest game bettors have ever seen, but Las Vegas should find a way to emerge victorious against a team that is missing nearly all of their top contributors.