I think a really important part of your DFS tournament process should be reviewing your teams as well as your opponents and other good DFS players’ teams every week. Everyone likes to talk about process over results, and of course that’s true. But I think it can sometimes become easy to fall into the trap of convincing yourself you are just getting unlucky when you’re making mistakes, or alternatively convincing yourself that you’re playing bad even though your process might be spot on. And it goes beyond winning money vs losing money. You can have a profitable week but make terrible mistakes, or have a losing week and be playing pretty well. For me personally, I actually made some of my biggest mistakes this year on my profitable weeks, which can be the difference between a great year and a bad year. In my opinion, understand all of that nuance is extremely important to long term success, and having a strong review process can be extremely beneficial to that.

Week 12 has been one of the most bizarre NFL weeks that I can remember, both for real life purposes and DFS. It made for an interesting (and tough) week in tournaments where we saw so much value pop up that you could really play anyone you wanted which caused a pretty massive shift in ownership by the time Sunday came around.

(If you’re interested in even more detail as to where my mindset was heading into kickoff, you can check out my Building a High-Stakes Tournament Lineup article, available only to Premium subscribers.) 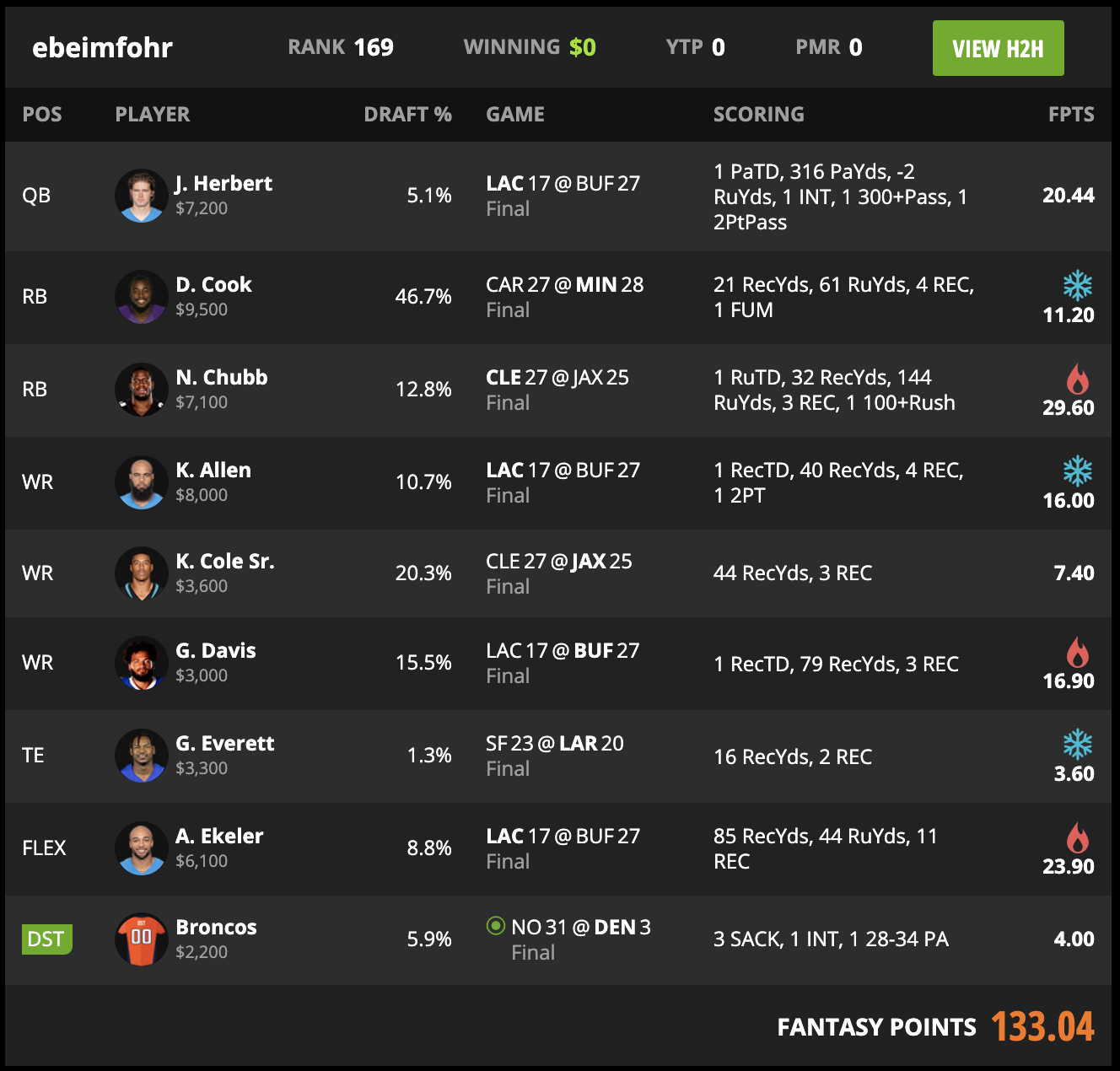 The first thing I’m sure you’ll notice here is the fact that there are no Chiefs, in particular no Tyreek Hill, in this lineup which was a death sentence this week. The Chiefs are actually the main storyline from this week for me, and an interesting discussion point for NFL DFS tournaments in 2020. Early in the week, before we had an infinite amount of value open up, I was pretty likely to be all in on the Chiefs game stack in tournaments. It wasn’t a super easy fit with the prices of Mahomes, Tyreek, Kelce and the Bucs players on the opposite side, which throughout the course of this year we have seen keep stack ownership in check. But that completely changed throughout the week.

We saw SO many players out with injuries or COVID that we had basically whatever value we wanted at any position. 4k RBs, 3K WRs and TEs, etc. The other thing that was interesting was that the Bills/Chargers game was what everyone projected to be the chalk game coming into the week. So all week you had everyone talking themselves into the Chiefs being pivots away form the chalky Bills stacks, and they all had more than enough value pieces to jam them in. So what happens by Sunday morning is that Mahomes/Tyreek/Kelce stacks are by far the most popular on the slate, and the guys in the Chargers game, especially Keenan Allen, end up much lower owned than everyone expected to start the week.

That’s not to say that playing Chiefs and Tyreek in tournaments was bad. I just believed it was very tough to make different Chiefs stacks with Tyreek and Kelce given their ownership and what it did to the rest of your team. For me, I felt it was an easier path to winning trying to pivot to the other game and a slightly different build.

Once I made that decision, I thought that stacking the Chargers game while flipping the build was the best path to success. On a slate where everyone was playing Brian Hill, Nyheim Hines and other cheap RBs to fit the Chiefs, I wanted to utilize the expensive RBs because there were also super cheap WRs with huge upside. So if the cheap WRs put up ceiling games (at lower ownership than the cheap RBs), then I get access to higher ceiling RBs (also at lower ownership than the expensive WRs).

Nick Chubb was my favorite play in a smash spot against the Jags at lower ownership, and he also had the benefit of having clear secondary correlation options in the Jags WRs. Jags WRs were in a sneaky good spot against a banged up Browns defense, and they were all $3600 or less. Perfect correlation with Chubb and also quasi leverage on a popular Browns DST, but it turns out it was Collin Johnson the one who popped for a big game.

I also felt that Austin Ekeler became maybe the best tournament play on the slate by Sunday morning. With Kalen Ballage and Justin Jackson out, and every report from Ekeler himself that he was 100% and in great shape, Ekeler was way underpriced for an elite spot at $6100. The Ian Rappaport report that he might not be a bellcow were enough to keep the field off of him, and those reports were pretty much nonsense imo. I liked using Ekeler in my stack with Herbert because Ekeler’s greatest asset is his receiving upside, which is also where his upside comes from. His presence really elevates their offense, and if they continued to pass as heavily as they did in week 11, Ekeler could see a massive amount of targets, especially if they fell behind. That part worked well, but unfortunately Keenan Allen couldn’t capitalize on his continued massive volume and the Chargers absolutely bungled the second half of this game. How have they not fired Anthony Lynn?

My final piece was TE where I attempted to capitalize on some late news breaking my way. Tyler Higbee was a GTD after not practicing all week, and I felt he was at best a coin flip to play. If he were to sit out, I thought Gerald Everett would be arguably the best TE play on the slate, but with their game being a late game we weren’t going to have that news before lock. Even if Higbee played, Everett has enough of a role to still have a solid game for $3300, so it was well worth it for me to take that shot on the inactives breaking my way for a 1% cheap TE.

All in all, not having Tyreek Hill made the slate a pretty quick burial. I liked Tyreek just as much as the public, so I think utilizing him over Dalvin to include a secondary correlation in that game would have been a really strong play. After Dalvin getting banged up and laying a dud, it’s obviously easier to say that’s what I should have done in this lineup. But in general, I feel pretty good about the process of thinking through the slate and getting onto the Chargers, lower owned RBs with huge upside and taking a shot on Everett.