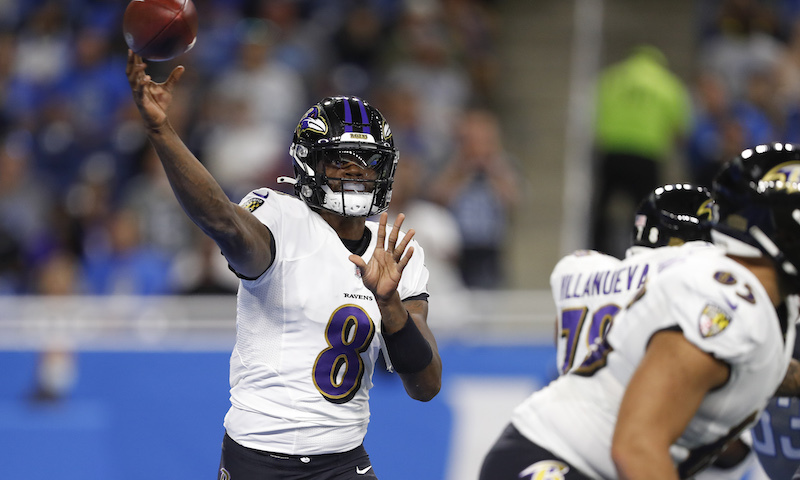 After a Turkey Day hiatus, we are back with some NFL Week 13 prop picks. With a void Lamar Jackson bet in Week 11, I was able to right the ship and go 2 for 2 with my A.J. Dillon and Tyler Boyd prop choices. We are barely back in the black with an opportunity to add this week. This season has not been great, but we still have plenty of weeks and the playoffs to add profit. Let’s go!

I feel cheated. Lamar Jackson was surely going to go way under his passing prop against Chicago. Voiding that bet felt unfair after hitting my other two props. That said, we collected on the under on A.J. Dillon carries and the over on the six catches courtesy of Tyler Boyd. After a disastrous previous week, hitting both props certainly helped the confidence. We move on to a much larger slate after skipping the small Thanksgiving slate. Let’s see what we can cull from the Week 13 menu.

Make sure to check out our game breakdowns in the sports betting section and some NFL betting tips prior to diving into this weekend’s action.

No. This is not laziness. No. I know how to find a new picture. Yes. Lamar owes me one.

On the road in Pittsburgh feels like as good of a spot, if not better, to play Jackson’s passing under. The number is a bit lower, likely due to his most recent performance against the Browns. Against Cleveland — at home — Lamar barely managed 160 passing yards with four interceptions. Will he right the ship? Maybe.

RotoGrinders GridironIQ projects Lamar to exceed this total. Allegiance to our excellent tools at RotoGrinders aside, I think I am going to give the Steelers a bit of credit. While not the Steel Curtain any longer, Pittsburgh ranks twelfth in passing yards against — just around 234.5 opponent yards per game. Coincidence? I think not.

The weather is getting colder. The weather could potentially bring showers. I just don’t see a path for Lamar to put together a big performance on the road. He owes me a bit of money after voiding last week’s three-leg parlay. Time to collect. Take the under at BetMGM.

Speaking of bad weather, Chicago will host the Cardinals in customary chilly, windy weather. The Windy City will not disappoint, with gusts potentially limiting the passing games in a game of the hammer versus the nail.

The nail — the Bears — have no reason to run the ball repeatedly except that their quarterback is Andy Dalton and the wind will act as the 12th man on the field all game. A recently returning David Montgomery handled 14 and 17 carries over his last two games. The Bears should look to feature their bellcow and hope the defense can stymie a potentially returning Kyler Murray.

At the time of this writing, both Kyler Muray and DeAndre Hopkins will be game-time decisions. While this frustrates daily fantasy architects, a weakened Arizona offense might only mean more work for David Montgomery. Given an even-money price, I can’t imagine not playing the over on DraftKings this week. Give me Montgomery for a plethora of carries.

I admit it. I am a sucker for a “squeaky wheel” narrative. The Seahawks, on a primetime stage, were not able to feature one of the most physically gifted players the NFL has seen in a long time against a bad defense. Four targets. One catch. 13 yards. What is going on in Seattle?

The winds of change seem to be brewing in Seattle. After Russell Wilson missed several games with his finger issue, the Seahawks find themselves in rebuild mode? A consistent spender on veterans at the expense of draft picks seems to be the type of stuff that ends up pushing the franchise quarterback away… Maybe DK Metcalf will see targets next season?

My guess is Metcalf is far too talented to not gameplan around. Given the unlikely event that the Seahawks have a postseason, I expect DK to be peppered this week at home. His quarterback, quoted in an SI article stated the need to move him around and study to get him the ball. Well… duh.

The game has passed Pete Carroll by. An absence of any legitimate running game should leave the Seahawks with no recourse to air it out and take advantage of their best weapon. I expect Metcalf to crush it this weekend. We would have laughed at this receiving prop last season. Jump in before it’s too late. Give me the over.