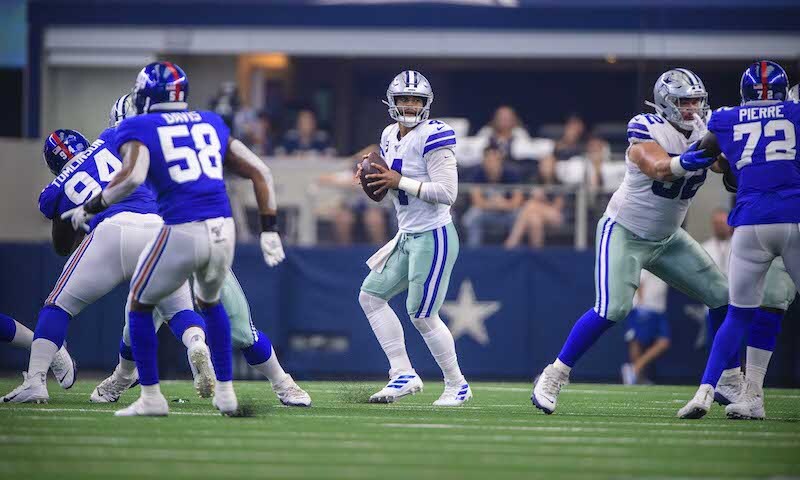 Last week, Overs continued to soar across the NFL as they went 6-1-1 in the early games. Things normalized a bit in the afternoon and night games, as three of the final four matchups went Under their respective point totals. That makes overs 36-23-1 for the season.

Though home-away splits entered the week .500, away teams dominated as they went 10-3 against the spread Thursday through Sunday. So when in doubt, I’ll continue to give the edge to away teams in Week 5, as it simply looks like oddsmakers are treating these games as they would if the games were at full capacity. That’s not the case, however. This is not a typical season and the game environments are more akin to what you see on neutral fields.

Here’s a look at all of the NFL Week 5 lines available as of early Monday morning.

These Week 5 betting lines are from FanDuel Sportsbook and accurate as of 6 AM Monday, October 5, 2020. All NFL odds are subject to change.

The Cardinals have dropped two games in which they’ve entered as betting favorites. They look to get back on track against what looks to be the worst NFL team in the league. The Cardinals not being able to win enough games is one of the reasons I advised to stay away from Kyler Murray when it comes to NFL MVP picks — but that’s for another conversation. Let’s talk about this Week 5 line.

However bad the Jets have been, their offense did look better Thursday night with the return of wide receiver Jameson Crowder. As we mentioned earlier, NFL Overs continue to print cash for bettors, and this is one of the lowest totals on the Week 5 board at online sportsbooks. It makes sense considering the Jets hadn’t scored more than 17 points before their 28-point performance last week. Expect the Jets offense to continue to improve and for these two teams to combine for at least 47 points on Sunday.

The Panthers have won two in a row, and Joe Brady’s offense is beginning to translate to success in the NFL. Mike Davis is filling in for Christian McCaffrey spectacularly, catching 21 passes in three weeks of action. The thing is, I like the Falcons against the Packers Monday night. In fact, I won’t be surprised if they win outright. Being so bullish on the Falcons means I have to lay the points with this early NFL pick. If Matt Ryan does beat Aaron Rodgers, this Week 5 betting line is likely to stretch another point or so.

The Ravens were -12.5 against the Washington Football Team earlier last week. They closed -14 ahead of kickoff and won right on the number, 31-17. I expect this one to play out similarly. The Ravens defensive line should have their way with the Bengals, and I expect at least a two-touchdown victory. Addtionally, don’t be surprised if the Ravens end up 14-point favorites by kickoff in back to back weeks.

Betting against the Texans has paid out handsomely this season. They haven’t only failed to win a game, but they also haven’t covered a spread. I’m not sure they should be laying 6.5 points to anyone. Not even a team that just lost to the Bengals 25-33.

The Washington Football Team lost by two touchdowns against the Ravens, but aside from a couple of bad decisions that resulted in costly sacks, Dwayne Haskins had one of his more impressive performances yet. The second-year quarterback completed 32 of 45 passes for 314 yards and zero interceptions against one of the best defenses in the NFL. 8.5 points feels like too much against a Rams team that barely beat the Giants on Sunday.

Decimated with injuries the 49ers gave the Eagles their first win on Sunday night. There’s hope that Jimmy Garoppolo and Raheem Mostert will return soon. I’ll wait to take a position on this game until their Week 5 injury situation is made more clear.

The Browns are 3-1 for the first time since 2001. They’re also 3-1 against the spread this season. They lost Nick Chubb early against the Cowboys but Kareem Hunt filled in just fine. The Browns are cautiously optimistic that Chubb didn’t suffer a serious knee injury, but there’s no need to rush him back to the field with Kareem Hunt available. However, Chubb’s absence will mean more passing for Baker Mayfield. To the benefit of Mayfield and the passing game, Hunt has doubled-down on his receiving skills since joining the Browns. I love betting the over here.

The Cowboys are 0-4 against the spread and would be 0-4 straight up if it weren’t for a series of miraculous events against the Falcons. Cowboys head coach Mike McCarthy now has as many losses with Dallas this season as the Packers have since firing him. The Cowboys defense hasn’t been able to stop anyone, allowing 36.5 points per game through the first four weeks of the season. I guess this is the tye of defense you get when you pay a running back nearly 100M. Lucky for them their defensive woes might come to an end in Week 5, as they face a Giants offense, led by former Cowboys head coach Jason Garrett, that is scoring only 11.7 ppg. So what happens when an unmovable object meets an unenforceable force (give me a break, I tried my best)? I think we finally get a Cowboys cover.