The DraftKings $3.3M Millionaire Maker didn’t quite live up to its name this time around, as two players tied for the top spot and each took home $550,000.

Jason Day built a lead and held off the rest of the field to secure the title for Mailnurs (68 entries) and TooMuchMonta (14 entries) and their identical lineups of Jason Day (1), Branden Grace (3), Justin Rose (4), Brooks Koepka (T5), Tony Finau (T10), and David Lingmerth (T12). 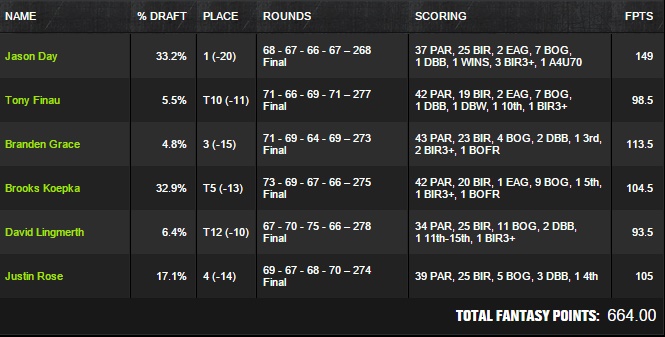 A total of 89,204 players submitted 188,295 entries for a shot at the $1 million first place prize. Eighty-eight players submitted the maximum 100 entries while 61,626 players (33% of the field) submitted a single entry. The table below shows the tremendous growth in PGA DFS this year.

As you can see, golf is quickly becoming one of the biggest DFS attractions out there. Here is a breakdown of the numbers for the PGA Championship:

Now let’s take a look at some other interesting statistics:

• The highest finish for a player with one golfer that did not make the cut was LaMagic in 1,097th place.

• The highest finish for a player with two golfers that did not make the cut was JSpieth87 in 17,947th place.

• The worst finish for a player with all six golfers making the cut was 158,124th place. 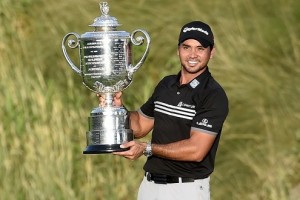 • The No Chalk Award goes to Hardfour, who had a lineup with no golfer over 0.16% owned.

• The Straight Chalk Award goes to 35 players, with each golfer at least 17% owned.

• Nine players cashed without choosing a golfer that finished in the top 10.

• 4,555 players chose Jason Day and Jordan Spieth but did not cash.

Congrats to all the big winners! Registration is currently open at DraftKings for the $2.5M Fantasy Baseball Main Event on August 28th, in which players will have another shot at a million bucks.