Maybe I can speak to some of you out there. Why on Earth do a good portion of us enjoy following 156 players hitting a little white ball around for four days? Why do we sweat every birdie and bogey like we would give away our first born children for a key birdie? It just makes no sense, right?

It makes all the sense in the world (okay, maybe not that much sense, but it makes sense). Daily fantasy golf is one of the best “sweats” out there, and the fact that the contests run for over half a week makes that even more fun.

Some might argue that they don’t like having funds tied up in golf for that long, especially since golf tournaments run through Sunday football days in the fall and winter. Golf action definitely picks up steam after the NFL season ends, just in time for the first big tournaments of the year in February and March before we get to The Masters in early April. A lot of you may be wondering whether or not to dabble into DFS golf for the first time. I know there are a lot of you out there.

This article is intended to be your guide. If you have never played a golf contest before, if you don’t know how a golf tournament works, and if you don’t know Tiger Woods from Hudson Swafford, this can be your introduction. You really don’t need a ton of knowledge in order to get your feet wet, but let’s examine a few of the basic principles of the DFS golf game. Are you ready? Let’s get to it.

How a Golf Tournament Works

Golf tournaments are generally played over four rounds, with the first round on Thursday and the final round on Sunday. Most tournaments have somewhere between 132 and 156 golfers, and there is a “cut” that takes place after two rounds. That reduces the field to the top 70 golfers (plus ties), and only those golfers play the weekend rounds. If more than 78 golfers are included in the top 70 plus ties, there is another cut after the third round in order to get the field closer to 70.

In a fantasy golf sense, it is absolutely imperative to get most of your guys through the cut. Obviously, players who don’t play on the weekend aren’t going to accumulate points for your rosters! This is why many people consider Friday to be the most important day of the tournament, in addition to the final round on Sunday. If you get all your golfers through to the final two rounds, you are likely sitting pretty in your contests for the week. Some smaller field tournaments do not feature a cut after the second round, but the above parameters are what you will be working with about 90% of the time.

This is an underrated but key component to playing daily fantasy golf. Most sites have scoring systems that heavily reward birdies. A birdie/bogey stretch of two holes will generally score you more than back-to-back pars, and this is true on both DraftKings and FantasyDraft. However, the FanDuel scoring format actually values pars more heavily than the other sites. The true grinders and par savers carry more value over there.

This is just a reminder to make sure you know the format before you dive in. If your site of choice values volatile scorers, you will want to target guys like Brooks Koepka and Dustin Johnson. If your site of choice values stability, you will want to target guys like Jim Furyk and Bill Haas. Now, as a new golf player, you might not know who the “volatile” guys are off the top of your head. Have no fear, however, as the PGA Tour has a “birdie average” stat that you can find among the wealth of statistics that are available. That will show you the guys who average the most birdies per round.

Doing a simple overview of each course heading into the week is paramount. It’s not that hard to find, as there are several sources that post overviews of each week’s course. The PGA Tour website usually has a synopsis of each hole, and we even post weekly course breakdowns here on RotoGrinders as part of our premium PGA content. Breaking down the course will help you figure out what type of golfer to target. If it’s a long course with wide fairways, you are going to want to target guys who hit the ball a long way off the tee (driving distance leaders). If it’s a shorter course with narrow fairways and a lot of trees, you are going to want to target guys who are good at finding the fairway off the tee (driving accuracy leaders). It sounds simple, but it’s a step that a lot of people often forget. In fact, I would say this is the biggest weakness that a lot of players have when they first start playing fantasy golf.

Keep an Eye on the Weather

Mother Nature can certainly impact a golf tournament, and there are times where you can get a huge edge in your contests because of it. Tee times on the PGA Tour are set on Tuesday afternoons, and golfers generally play one “morning” round and one “afternoon” round on Thursday and Friday. If a golfer plays on Thursday morning, he will play on Friday afternoon, and vice versa.

If there’s a weather pattern that sets up to where it will be extra windy for one set of tee times, it is often advantageous to set your lineup with more golfers from the favorable side of the weather draw. If you think this is something that I am overreacting to, just ask plenty of people who have won GPPs (myself included) because they came out ahead in the weather department. It doesn’t always make a difference, but there are two to three times a year where it can be a real key. 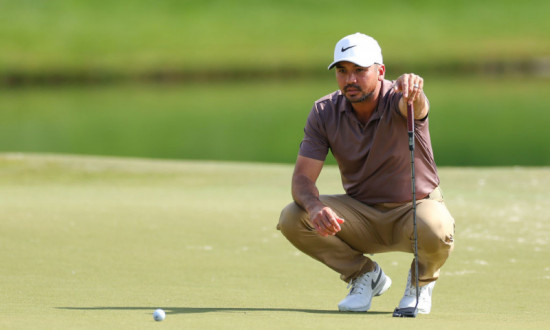 Golf can be a rewarding daily fantasy game, but go into it knowing that it can also be a tough grind. Variance is largely inherent in the sport, and I liken it to baseball in that realm. The better players will come out as long-term winners, but it can be frustrating from week to week.

With that knowledge, we can also use game theory to our advantage. I usually like to try to pick out two or three golfers each week that I know will be highly owned, and I will fade (not play) those golfers in my GPP lineups. Anyone is capable of missing a cut or not getting a top 15 finish when they are expected to, and swerving from the pack when a golfer is going to be 30% owned has a lot of merit to it. Instead of getting frustrated by the variance in the game, embrace it and use it to your advantage — especially in GPP formats.

Golf may not be a sport that you HAVE to watch in order to succeed in DFS, but it certainly helps. Simply watching one round of golf on television will allow you to see shots from maybe 20 different golfers. You will quickly learn who the bigger hitters are, who the better players are, and the nuances of the game will come to you quickly. There is something to be said about this approach, and it helped me enjoy watching golf on television. Yes, it’s more exciting than most people make it out to be (I will admit there is plenty of opinion in that statement).

You will hear these buzzwords often in DFS golf, and it is sort of akin to the “BvP” debate in baseball. Golf is very much a mental game, so current form is a factor you need to consider. If a guy has put up a top ten finish in three straight tournaments, he’s probably got something good working for him. Conversely, if a guy has missed five straight cuts, he’s probably trying to work things out. That is the “current form” part of the debate, and most people agree that it is important. The “course history” piece is more polarizing. However, there are certain guys that just tend to do better on certain tracks. If a guy has played a tournament 15 times without ever missing a cut, it’s safe to say that he likes playing on that course. As a recreational golfer myself (albeit a terrible one), there are just some courses that I like playing better than others. A professional golfer is no different.

The questions reside in how much to weigh each factor. What happens when a guy in “good form” has “bad course history” or a guy in “bad form” has “good course history” for the current week? It’s all part of the puzzle, and I tend to weigh current form a little bit more. Some golfers are simply better in their current state than they were the previous times they played a specific course. That said, you have to factor both of these things in along with weather, DFS pricing, etc…

It may sound simple, but Vegas produces odds on every golfer for every tournament. Simply looking at the Vegas odds for an event can help you identify golfers that are underpriced or overpriced for DFS purposes. If a guy is listed as the 5th-most likely to win the tournament in Vegas but has, say the 25th-highest DFS price, he’s likely a good value. It’s an easy concept, but it’s not one that you want to overlook as you set your lineups. This is especially true as you first get started and may not know who all the golfers are.

As you learn, it’s perfectly fine to piggyback off others. A lot of people are afraid to listen to the “experts,” but there’s a reason why people like Notorious and myself provide golf content. It’s a ton of fun to play this DFS sport, and we want to see it grow! There is no shortage of information out there, and all you need to do is attack it and take it all in. Don’t be afraid to learn, and ask questions along the way. That’s why we are here!