Poker and DFS: Similarities and Differences (Part One)

Much has been made about how poker and DFS relate. We’ve seen many online poker players transition to DFS, and there are quite a few people in the DFS industry with online poker experience. Is DFS simply the new poker or are they just barely relatable?

I think DFS and poker are starkly similar at a lot of levels, but there are some key differences. In this article, I’m going to go over the key conceptual similarities and differences between poker and DFS, and in a future article I’ll go over a lot of the common phrases/analogies drawn between poker/DFS and see how they hold up (such as cash games/tournaments jargon).

Both games are skill-based games played against other players and not the house: This is pretty much stating the obvious. It takes skill to succeed at both poker and DFS (though legally they differ, it’s plainly obvious that poker involves a lot of skill too). Both games are played against other players, where the house takes an administrative fee (or rake as is the case in poker). Average players will lose the rake in the long run, but skilled players can make a profit at both endeavors. 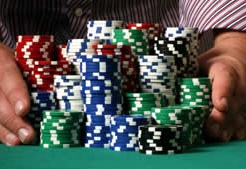 Both games involve a significant amount of variance: Luck plays a factor in everything at life, and it certainly does at both poker and DFS. Trying to say which one has more luck is a fairly futile endeavor in my opinion since a lot depends on how each of the games are played (how many hands in poker, how many entries/contests entered in DFS, skill of opponents in each, sports played in DFS, etc.). Smart players understand how variance works in both games, whereas dumb players claim when they win it is skill and when they lose it is luck at both DFS/poker.

The eco-systems of both games tell a similar story: Let me know if this sounds familiar. People learn about this new exciting type of contest. The industry grows from a small niche of players into something that is played by a lot of people in the general public. The games start out fairly easy to beat for someone skilled, but become progressively harder as the more skilled players stay, casual players get better or quit, and professionals are attracted to the industry due to the large amount of money involved.

Winning in both involves maximizing positive expected value decisions: Making positive expected value decision (+EV) is the mantra for winning at poker. If you are on a draw, you need to make sure you have enough implied odds to justify trying to hit your flush, straight, etc.. If you are bluffing, you need to know that the percentage chance of success justifies the amount of money you are risking in the pot. Players that use hindsight to justify decisions generally aren’t long-term winners at poker, but those that evaluate if the decision was +EV or not do.

The same concept applies to DFS. You’ll never know for sure if a hitter will hit two home runs in a game, but was drafting him a good move based on his salary, projected points, and ownership (in GPPs)? Are you maximizing your entries in contests that have overlay compared to high rake ones, thereby maximizing your expected return from your entries?

Understanding the theoretical basis on how to win is very much the same in both poker/DFS, but actually doing it is quite different. In poker, you play cards and in DFS you build lineups, but the differences don’t stop just there.

Poker is a game of limited information. In DFS, all the information is out there prior to lineup lock. The salaries are known, historical stats are known, and the fantasy scoring is known. Everyone starts with the same budget in DFS, whereas in poker you start with different hole cards each hand. There’s no bluffing in DFS, whereas it is integral in poker.

Potential cheating and other issues differ starkly: In poker, you have to worry about players colluding or if there’s a ‘superuser’ that can see your hole cards (in the case of the Ultimate Bet scandal). There’s no such worry in DFS. Most potential cheating issues with DFS are fairly minor (such as lineup selling, which in the case of a GPP or if the lineup is bad can actually help other players).

DFS requires knowledge of sports: I’m pretty much stating the obvious here! A person can be a great poker player, but they’re going to have to learn sports if they want to succeed at DFS! While I think a lot of players overestimate their sports knowledge and what edge they can get from it compared to focusing on contest types, limiting fees, and contrarian strategies, you without a doubt have to know how to diagnose value plays and which players have high statistical ceilings/floors.

There’s no such thing as “contrarian” in poker. In poker, you are dealt random cards. You can’t choose that you want to have aces before the flop or that you want to go with something zany like 5-8 suited. In DFS, you can. You can predict a player’s ownership in a GPP (in a general sense) and if you want to fade a common player and take on a rare position, which can catapult you to the top of a GPP. In poker, you simply aim to gather more chips and avoid busting out to win a tournament.

If you were an avid poker player, you probably appreciate how a lot of the decision making process is similar between poker and DFS. But when it comes down to it, doing the nitty gritty processes to be successful can be quite different!