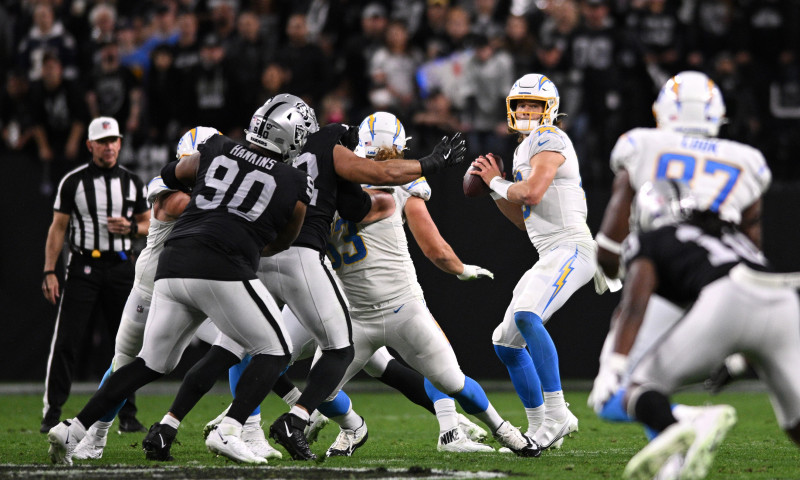 Tonight, the Pittsburgh Steelers and the Los Angeles Chargers will battle on Sunday Night Football at Sofi Stadium. Pittsburgh has not lost since Week 4 against the Green Bay Packers, but each of their four wins have come by one score, and a tie against the Detroit Lions at home further illuminates the lack of elite talent on this roster. Los Angeles has lost three of their last four games, but they are likely better than their recent results suggest. Oddsmakers are expecting a relatively easy win tonight for the Chargers, pricing Los Angeles as a touchdown favorite on the spread.

Following a three game early season losing streak, Pittsburgh won four consecutive contests against the Denver Broncos, Seattle Seahawks, Cleveland Browns, and Chicago Bears. Each of those wins came against lackluster opponents, and each victory came by only one score. In Week 10, Pittsburgh had their winning streak snapped when they tied with the winless Lions.

Ben Roethlisberger missed last week’s contest against Detroit, due to COVID-19 health and safety protocols, but he has been cleared to return to action for this evening’s tilt against the Chargers. Roethlisberger does not figure to add much to this offensive attack tonight. He has not thrown for more than 266 yards in a game since September. Only twice this fall has Roethlisberger thrown for more than one touchdown in a game. Amongst qualified signal callers, he has the 27th ranked QBR in the NFL. Both Roethlisberger and running back Najee Harris have seen their production limited by a porous offensive line this year. Pittsburgh’s offensive line issues might be even worse on Sunday without Kevin Dotson in the lineup, due to injury. Harris is averaging only 3.7 yards-per-carry, despite being entrusted with 22 or more rushing attempts in each of the last five games.

Defensively, Pittsburgh has been mediocre against the pass—allowing opposing quarterbacks to throw for 12 touchdowns against only three interceptions this season. Notably, Joe Haden, T.J. Watt, and Isaiahh Loudermilk have been ruled out for this evening’s action. Cameron Heyward and Chris Wormley will be the only two solid contributors for this defense against the run. This unit will be particularly vulnerable against the pass, with James Pierre being the only reliable member of a weak secondary unit.

The Chargers were the talk of the NFL after starting the campaign 4-1, which included a seemingly impressive win at Arrowhead Stadium over the Kansas City Chiefs. Yet, after losing three of their last four contests, the market has cooled considerably on Los Angeles. Other than a brutal loss to the Baltimore Ravens, Los Angeles has still been competitive against each of their opponents. This group has a three-point loss to the Dallas Cowboys and the New England Patriots, and a seven-point defeat at the hands of the Minnesota Vikings for three of their four losses. It is hardly time to hit the panic button.

Despite the team’s recent struggles, Justin Herbert has remained mostly excellent. On the season, he ranks sixth in passing yards and passing touchdowns, and fourth in QBR. He has been somewhat careless with the football over the last month of action, throwing four interceptions in his last four games, but Herbert should perform much better against a struggling Pittsburgh secondary unit. Los Angeles also has the benefit of an outstanding left side of the offensive line, featuring Rashawn Slater, Matt Feiler, and Corey Linsley. The Chargers should be able to move the ball with relative ease in this one.

On the defensive side of the ball, Los Angeles has three standout performers with Nick Bosa, Drue Tranquill, and Derwin James. Unfortunately, there is not much else to love about this unit. Opposing signal callers have thrown for 12 touchdowns against six interceptions—good for a 92.6 passer rating this fall against the Chargers. Los Angeles has allowed an NFL-worst 4.8 yards-per-carry on the ground. Only the Houston Texans and the New York Jets have allowed more rushing touchdowns in 2021. Only the Steelers have allowed more rushing attempts that have gone for 20-plus yards. Los Angeles could struggle to contain Harris in this one, even with him running behind a banged-up offensive line.

Both the Steelers and the Chargers are likely to struggle defensively in this contest. Neither team is particularly well-suited to contain their opponent on the ground in this matchup. Both secondary units are extremely vulnerable, and have provided little resistance for opposing quarterbacks in 2021. If bettors need any extra motivation to play the over in this contest—both Pittsburgh and Los Angeles rank in the top-13 in plays run per game this fall. The over has a good chance to cash on Sunday Night Football.