The GPP Scene - Should You Care About Ownership Percentage?

One of the least discussed daily fantasy topics is the dichotomy of ownership percentage. On one hand, players are highly owned because they are in a good spot to produce. On the other hand, it’s hard to win a tournament if all the players you have are 60% owned. So what do we do in these circumstances? That’s what I will break down in this week’s GPP Scene. Let’s get to it.

I’m going to break down various methodologies that I have seen on Twitter, RotoGrinders Forums, and other media below. Let’s get started with some of the most common practices. I’m going to leave the concept of stacking out of this discussion, as I have already written about that on several occasions and it’s not the point of this piece.

I follow this strategy in NBA and college basketball, and it’s certainly a strategy to use in cash games for all sports, but I think a daily fantasy player is doing a disservice to himself or herself if they take this approach in baseball tournaments. There is so much variance in baseball that you almost have to take ownership percentage into consideration. Almost all seasoned veterans of daily fantasy MLB will agree on this. Again, it’s something you can use in cash games, but the tournament dynamic is a different animal.

What would I do? – Never use this strategy in MLB tournaments.

Strategy #2 – “Go against the grain with your tournament lineups and aim to take a team full of players with low ownership.”

This is the other end of the spectrum, and I believe that it’s a little too extreme. If you are taking a team full of low-owned players, there are a few issues. First off, there is probably some reason why all of them are low owned. It could be because you are stacking against Clayton Kershaw. That’s probably not a wise move. In addition, it would be a rare case to see ALL your low-owned players go off. When some of them do well and others don’t, you aren’t gaining much of an edge on the field. It also hurts when a mid-to-highly owned player does well. This strategy does have the potential to run away from a leaderboard if it hits, but the odds of it hitting are very low.

What would I do? – Only use this in EXTREMELY large field tournaments where you might hit it big. For example, a 30,000 man Squeeze on FanDuel. This isn’t viable in a 400 or 500 man GPP.

What would I do? I am fine with this strategy, but read on to #4 below to get a better picture of what I would do.

Strategy #4 – “Blend your team with players who will be highly owned and a handful that could be diamonds in the rough.”

This is probably the best strategy to use for MLB tournaments, because it gives you the stability of taking the best players of the day (ones who will be highly owned), while it also allows you the flexibility to take that sneaky play that nobody is talking about. You may hear this colloquially referred to as “planting a flag” somewhere. For example, let’s say you have a team built where you project every player to be 25-50% owned. This is probably fine for cash games, but it would make it hard to win a tournament. As a result, you decide to change a pitcher to a guy with a lot of upside that may only be 5-10% owned. If that pitcher hits, you have a huge leg up on the field even by differentiating just that one position.

What would I do? I would happily use this strategy all day, every day, in any GPP format.

The kicker here, of course, is that you have to obtain a grasp of what projected ownership percentages will be for this discussion to have any merit. I get asked about this on Twitter every now and then, and it’s extremely hard to explain. There isn’t a special skill that can help with this, and it’s not something you can figure out overnight. There are things that you can do to help speed up the process, though. Simply playing daily fantasy baseball for a while will help you gain an understanding of who will be highly owned on a given night. See who Notorious is recommending in the Grind Down. See who Beermakersfan is recommending in the Six Pack. See who the experts are recommending on Grinders Live. See who Dan likes on Sirius XM radio. See who people are talking about in the forums. See who is being discussed on Twitter. Read some RotoGrinders incentives content. With all those different forums of information just through this very site, it is easy to figure out what ownership percentage will be like in a general sense. 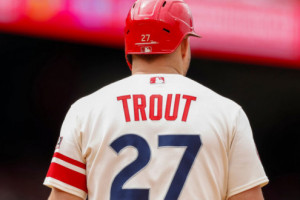 From that point, you can apply whatever rules that you see fit. Another popular question is “At what ownership percentage do you automatically fade a player?” This is a question that does not have a concrete answer as there are many schools of thought on it. In fact, this could probably be an article all on its own. Whatever you set for your guiding principle here, know that this is an important topic. If you knew Mike Trout was going to be 75% owned on a given slate, would you play him in your tournament lineups? I wouldn’t. There’s too much variance in MLB to be taking someone that is going to be that highly owned in a GPP. What about 50%? At that point, you start to enter a gray area. This is part of what makes daily fantasy sports so much fun — and also a game of skill. There is an amazing mental element to approaching things like this. Being a step ahead of the field will help you keep your edge long-term.

The troubling part about dissecting this article will be that I haven’t really provided anything concrete. In fact, much of this topic is intangible by its very nature. I think that’s why it doesn’t get discussed as often as it should. I’ve seen the discussion come up more of late, and I would be happy to continue it in the forums if someone wants to make a forum thread on the subject. I think this issue is a fascinating one, and this is a topic that will evolve over time.