The Impact of Bullpens On Lineup Selection

The Impact of Bullpens On Lineup Selection

In addition to a full time job as a software product manager, Alex Zelvin works part time for Fanduel.com (Zoobird on FanDuel)

Despite the fact that most daily fantasy formats don’t include relief pitchers, it still pays to pay attention to them. Teams’ bullpens impact daily fantasy baseball in two ways. They affect the probability of a starting pitcher winning their game, and they affect the expected performance of opposing hitters. On average, more than a third of a hitter’s at bats will be against the opposing team’s relief pitchers. Since you’re probably targeting hitters facing especially weak start pitchers, that number may be more like one half. Ignore the quality of the opposing bullpen is a mistake.

So how do you evaluate the quality of a bullpen? The most obvious approach would be simply to look up the ERA of the team’s bullpen for the season. That would be a mistake. The first problem is that ERA isn’t a great predictor of future ERA. You’d be better off looking at cumulative strikeout and walk rates (and groundball rate, if available). 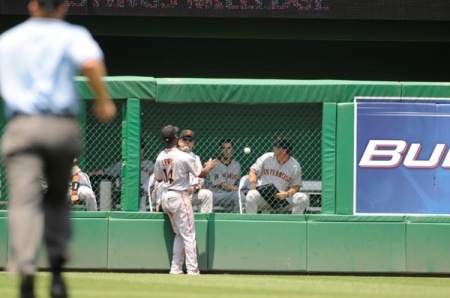 That still ignores the biggest problem though. Bullpens tend to be very fluid, with many teams’ bullpens including almost entirely different players at various times during the season. Without looking at the actual players in each bullpen, some of the benefits of evaluating bullpens are lost. The simplest way to do this would be to average the strikeout rate, walk rate, and groundball rate of all members of the bullpen to get a set of composite statistics.

Theoretically even better than that would be if you could weight the players’ statistics based on how heavily used they are when the team has a weak starting pitcher on the mound. That would give a better indicator of usage in the type of situations you’re likely to be choosing opposing hitters, but it’s also a nearly impossible task unless you’ve got some pretty sophisticated simulation software.

The last thing to consider is that sample sizes for relief pitchers tend to be very small, leading to high variance in their statistics. You’ll likely do better using ‘professionally’ developed projections for each relief pitcher on the staff, rather than simply using the statistics they’ve compiled to this point in the season.

If you’re only doing some of the analysis I suggested in this article, don’t feel bad. I’m not doing most of what I’m recommending either…at least not yet. If you’re taking the quality of the opposing bullpen into account at all, I think you’re probably in the minority and ahead of the game.